I found this interesting site with some selected ads. Though there exist some better, more spectacular ones.
My favorite computer on this site is the Intecolor 3621 by Intelligent Systems Corp (ISC) and the IBM 5110 under $18,000. Also nice big disc drives from Shugart. 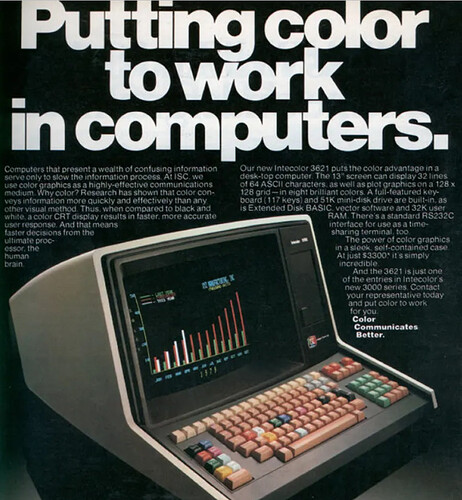 In this article, we’ve collected some retro computer ads to give you a hands-on look into what made the tech headlines before the age of smartphones.

nice, thanks for sharing. i want me one of those vintage all-in-ones, like the intercolor you highlighted. doesnt event have to work, ill gladly look at them forever. time to hit the bay

This is the first time I’ve heard of The Imagination Machine. At first blush, it looked like an add-on for the ColecoVision.

Found a pamphlet. So System32 is the company, the computer is a Intecolor 3621, from the 3600 family. dvq.com/ads/isc_3600.pdf
So the Intecolor 3601 is actually just a desktop terminal, not a computer.
But it’s a graphical terminal.
But the Intecolor 3621 is a full stand-alone computer.
It uses 5.25" disks that store 51.2K per side, has 32K of ram, and can run BASIC & Fortran.
Good lord that’s a lovely keyboard. 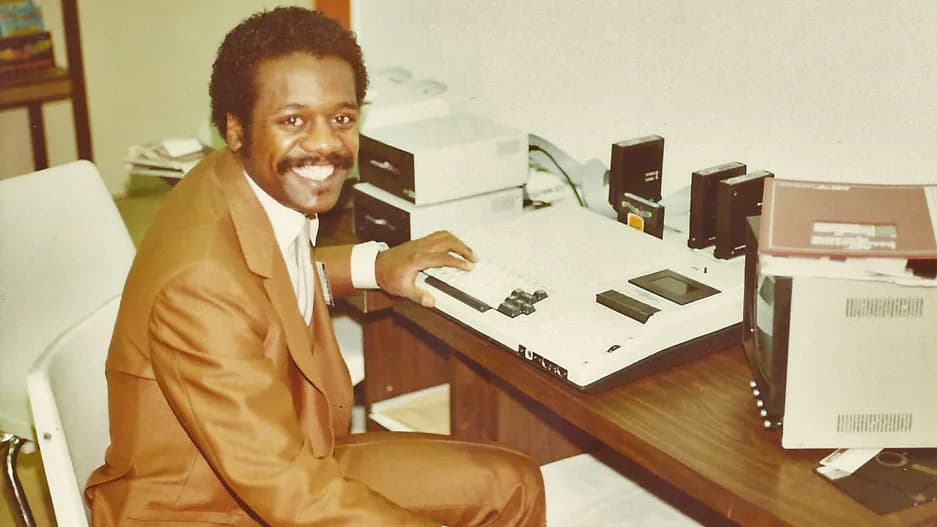 At APF in the 1970s, as the second-known African-American video game engineer, he helped create an industry.

l was most taken with the PeCos One, the only microcomputer to have JOSS built-in. Wow! Unfortunately, it sounds like it flopped quickly. I see the computer’s design stayed with the idea of using tape drives (two of them). APF was really stuck on that idea. It sounds like they should’ve listened to their engineers. The article seems to imply they were pressing management to offer disk drives. Unfortunately, the article doesn’t talk about the reason they didn’t go for that. Maybe it was simply to keep the price down. Adding disk drives increased the cost of a system quite a bit. It noted that Apple’s drives were cheap. Do you have any historical price information on that? My impression was that all disk drives were expensive, but I could be mistaken. Plus, you typically needed enough memory to load a disk driver, and memory was expensive. This was the case with Apples, and every other computer, except Commodore, which went the route of putting the DOS in ROM, in the disk drive, enabling it to take up no memory on the computer. Though, that meant that the disk drive had to be a computer itself, making it like buying another computer.

I suppose the reason Apple’s drives could’ve been cheaper was they didn’t have drive controller hardware. The Apple computer acted as the controller through software. This requires memory, though, in addition to the DOS that’s loaded.

Kind of interesting the article called JOSS a “defense contractor programming language.” Eh, yeah, RAND Corp. is a defense contractor, but it’s a think tank. They don’t make weapons systems. JOSS is obscure. I’ll give the article that. I hadn’t really heard of it until probably 14 years ago. The intent with it was not just for defense work (which I’m sure it could do). The reason it’s beloved by some computing luminaries is because of its language and user interface design. It wasn’t stodgy and bureaucratic, like you’d expect from the description the article gives it. It was even whimsical. If you typed a syntax error, it would respond,

Not even Applesoft Basic, the friendliest Basic I used in that era, would do that.

There’s some good video online demonstrating how to program in JOSS, how code was organized, and what you could do with what I’d call “gestures.” They weren’t commands, but symbolic gestures, describing what you wanted. Hard to say how much of this was in the PeCos version. 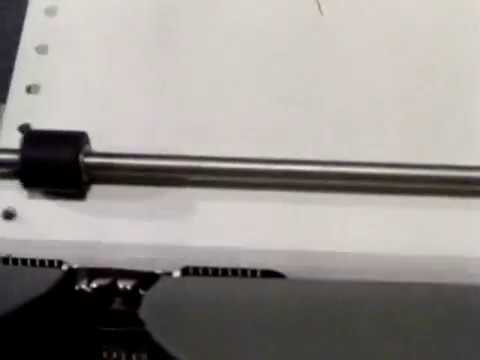 It’s interesting to consider that even though people likely felt alienated from the PeCos because of JOSS, it had some language features that feel familiar to Basic programmers.

The resulting product, the Disk II, was almost obscenely profitable: For about $140 in parts ($80 after the shift to Alps) , Apple could package a disk drive and a disk controller in a single box that sold at retail for upwards of $495. Better yet was the impact the Disk II had on computer sales, for it suddenly transformed the Apple II from a gadget only hard-core hobbyists would want to something all sorts of people could use. Few outsiders realized it, but in strategic terms, Woz’s invention of the disk controller was as important to the company as his invention of the computer itself.5-The Disk II

This could help with apple disk prices. 1979?
A 8" floppy could be $2,000 .8 MB (cp/m)
A hard disc $20,000. 2.5 MB
At that time I guess with mini-floppies you would only have ONE file
per disk, like cassette tape. (Remember Stringy Floppy to replace casstte i/o)
.A game or program on one disc, data on a second
disk.BASIC was the OS and 1K ram out of the 32k may be all that was needed for a floppy. Look at any database program then , record size 256 bytes max ( 1 disc sector).
It was not computers needed to be cheap, many did not thave the budget for proper hardware for them at time

Wow, great find on the JOSS film. This must have blown people away in 1964.