Next to the Festo programming device(s), I found this one, about the same age (I think 1980). There are also some rare keys. Nice key alignment and display. 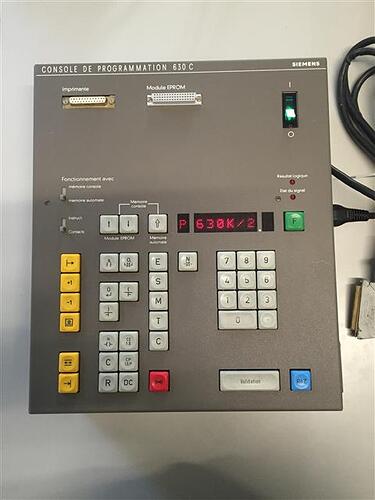 img-8661480×640 31.4 KB
http://www.ard72.fr/pages/musee-de-l-automatisme.html
There’s another photo on this small museums page showing a narrow external UV erasing device which can be attached to the left

PG obviously stands for Programmiergerät (programming device), note the French name here Console de programmation.
Programming is for the SIMATIC S5 devices, language is STEP-5 (predecessor of STEP-7 which I think is still the global leader and now also used by Festo.

I won’t buy this as it’s still expensive and not even rare. I think 8085 based.
There are other programming devices for S5 like the PG631, PG675/685 which are still portable but has a CRT monitor, disk drives and full keyboard.
I mentioned the keyboard here

I found this interesting key(s) on a Siemens Simatic 5, looking like a flower. It’s for a hardcopy. There are also keys with 3 horizontal lines and an arrow (Insert segment) and one thick vertical line with 2 diagonal lines (interrupt) and others. These are the upper oval keys, symbols are not printed on the keys but above. Taken from photos on commons. The buyer of the original unknown machine has still not given a feedback, what is quite unusual (in Germany). Maybe there are issues. But it’s…

Also of interest this forum post including ROM dumping (in German).

Also of interest are training PLC devices. There are many, especially in Asia.
A simple one with a nice design is this one by SS Lavs India. Reminds me of the Tandy x-in one kits (box, color design) 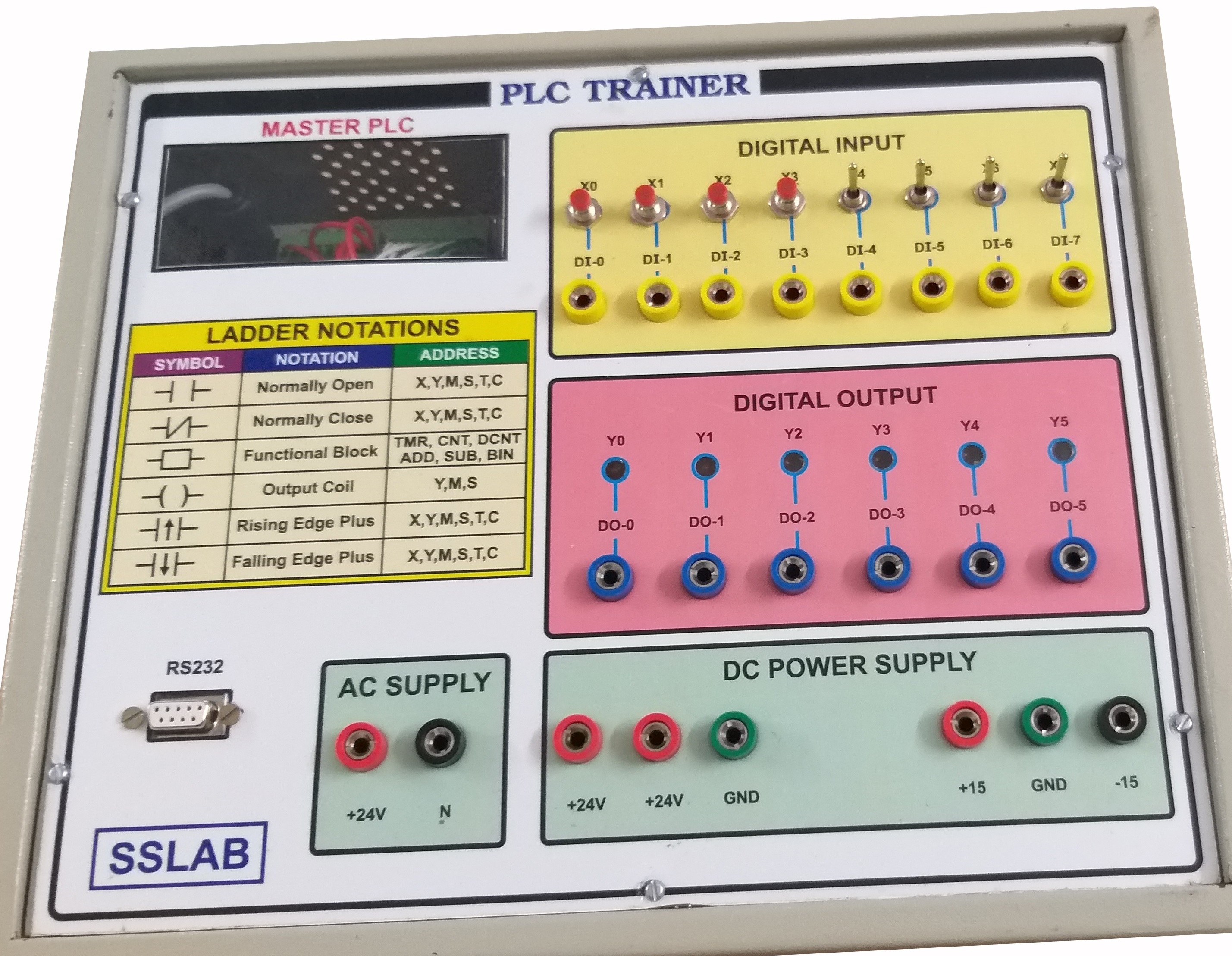 Before checking deeply my Festo ROM, I’ve checked the classic-computing forum (VzEkC) more carefully and read the Simatic S5 manual. (PG 675 pictured which is also a CP/M computer, from commons)

The S5 has different mnemonics (on left the “U”) but 1 of the 3 or 4 programming methods is the same than on the Festo. KOP (Kontaktplan), on right with the lines. That one can also be printed on the screen. (taken from SIMATIC S5 Automatisierungsgeraete S5-130 und S5-150, p.61) 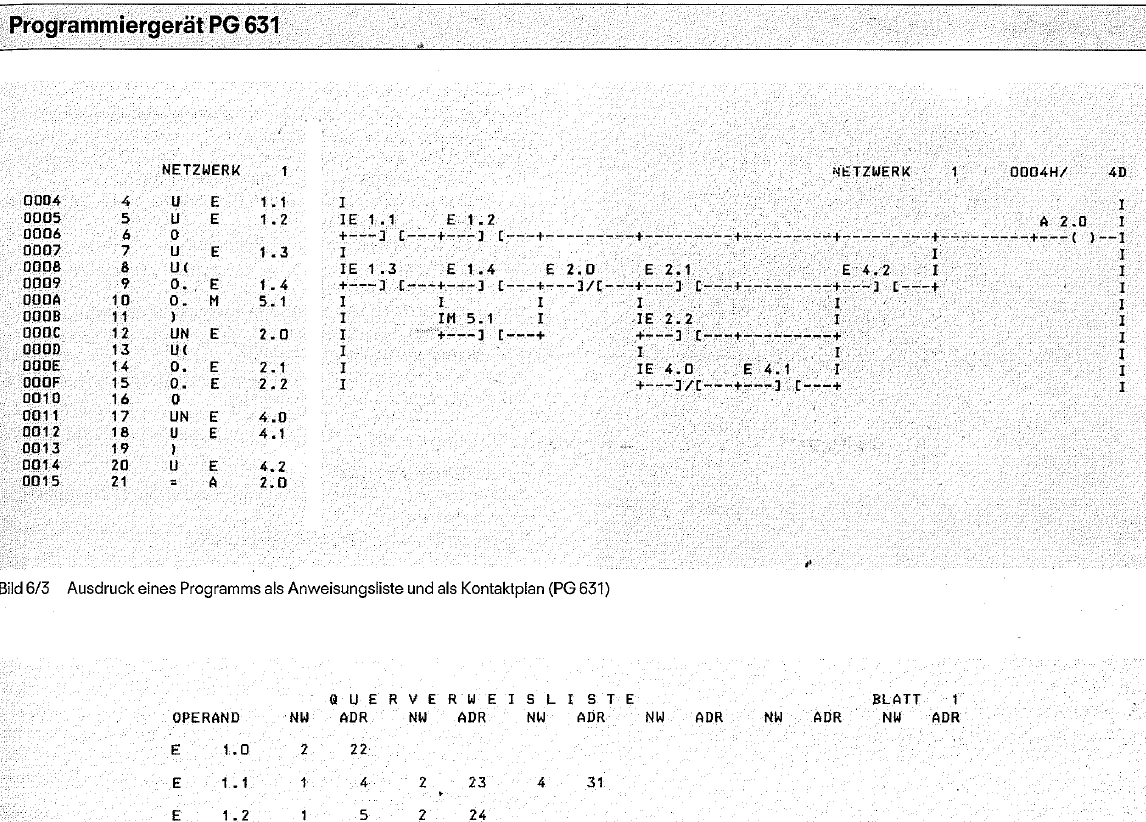 I think with this manual and mine, I can convert Festo and S5 (and maybe S7) software in both ways. Maybe not much of use, as few people have software, but at least there are some samples.

There’s also a thread on the MAME forum (bannister) and there are I think 2 more manuals and even the ROMs.
So I’ve downloaded the MAME dev tools and sources (of this fork), ~1.5 GB compressed, ~3 GB uncompressed, took almost 2 hours to download and compile (I think you don’t need all of the MAME sources, just the one needed, but I wasn’t sure about the folders, so I did it like told).

The PG631 is not supported (there’s not even the source). I later found the source on github.
The ROMs also don’t match the ones needed (although from the same person). 2 larger ROMs vs ~9 ROMs, I’ve splitted them to match the size, but the CRC is different. Skeleton driver anyway (for 1.5 years).

I have checked the PG675. Works, needs a disk (green large arrow on screen and a clock), I have 3 disks images including CP/M disks, some are recognized but none worked. There were even games played on that. But sources are still interesting. The 675 has an 8085 (or was it 8080 CPU) the others have different CPUs.

The S3 (1973, I think the first notable one in Germany) would be even more of interest but I haven’t found much info.