and in particular why it would be there twice.

Another, rather speculative guess: what, if this symbolizes cutting a line, which would be the control key? (It doesn’t add up with anything like cutting line two of three, though.) Surely, you’d want a control key and I can’t see any on this keyboard.
We may even speculate that the second one would normally go to the extreme left position on the 3rd row, which is here taken by the “ß” key (where is shift-lock nowadays). This would be a common position for CTRL on earlier keyboards, on the left and right of row 3. It would also explain why “ß” is located so peculiarly outside the normal block of alpha-numeric keys.

(Backspace, which seems to be at SHIFT+“ß”, would have normally been where the upper of the two “Is-it-CTRL-or-not”-keys is located in this layout. This makes some sense to me: they had to find a key for “ß” and relocated the left CTRL key. It would have made even more sense, though, if they had just dropped the second key and kept backspace where it’s normally found. However, as a German keyboard user, you’re used to minor nuisances like this.*)

Edit: As I’m now rather convinced of this, sorry for side-tracking regarding the segment mark.

*) Fun trivia: guess where the UNIX home directory is on a German Mac keyboard – yes, it’s Option+n and it’s a dead key, so you have to press SPACE after this. And the square brackets are on Shift+Option+5 and 6 respectively and not marked on the keyboard, etc, etc. There’s a cost for having umlauts, ß and § (the latter being used to mark legal paragraphs)…

Just to make a point, what would we think of these keys in this rearrangement?

That’s what it was, not the ignition! I knew I saw it somewhere on my tractors.

I found the curved arrow. There’s also one pointing left.
I continued checking the vintage keyboards on the deskthoritity wiki and found it on a Siemens Nixdorf keyboard (there’s just one). It’s for SINIX

The manual (English+German) says SHIFT to position of next/preceding word SML, SMR. S is shift, L/R is left/right, not sure what M is, probably movement. Page 93 for English

There are also 4 other delete keys, one DEL and one with an X (Backspace) and Delete character and delete word (as I found on other keyboards). DEL has different meanings and is mainly for termination of a program
There are also several character tables of dead keys ISO 8859-1 etc, but I haven’t found the striked lines.

It’s possible that they replaced the key caps and they are aligned at 90/180 degrees, but it’s unlikely that they misaligned both keys. Maybe one key is a replacement for another key, they didn’t have.
Deletion is likely or TAB.

Tandberg also have the same key but not in black. There’s a symbol of 3 vertical lines striked by an arrow down. From the terminal wiki (Tandberg 2200) I haven’t read the manual. But probably it’s a different key.

https://terminals-wiki.org/wiki/index.php/Tandberg_TDV_2200
Another interesting key is “HERE IS” like on typewriter TI Silent 700 also some maths symbols 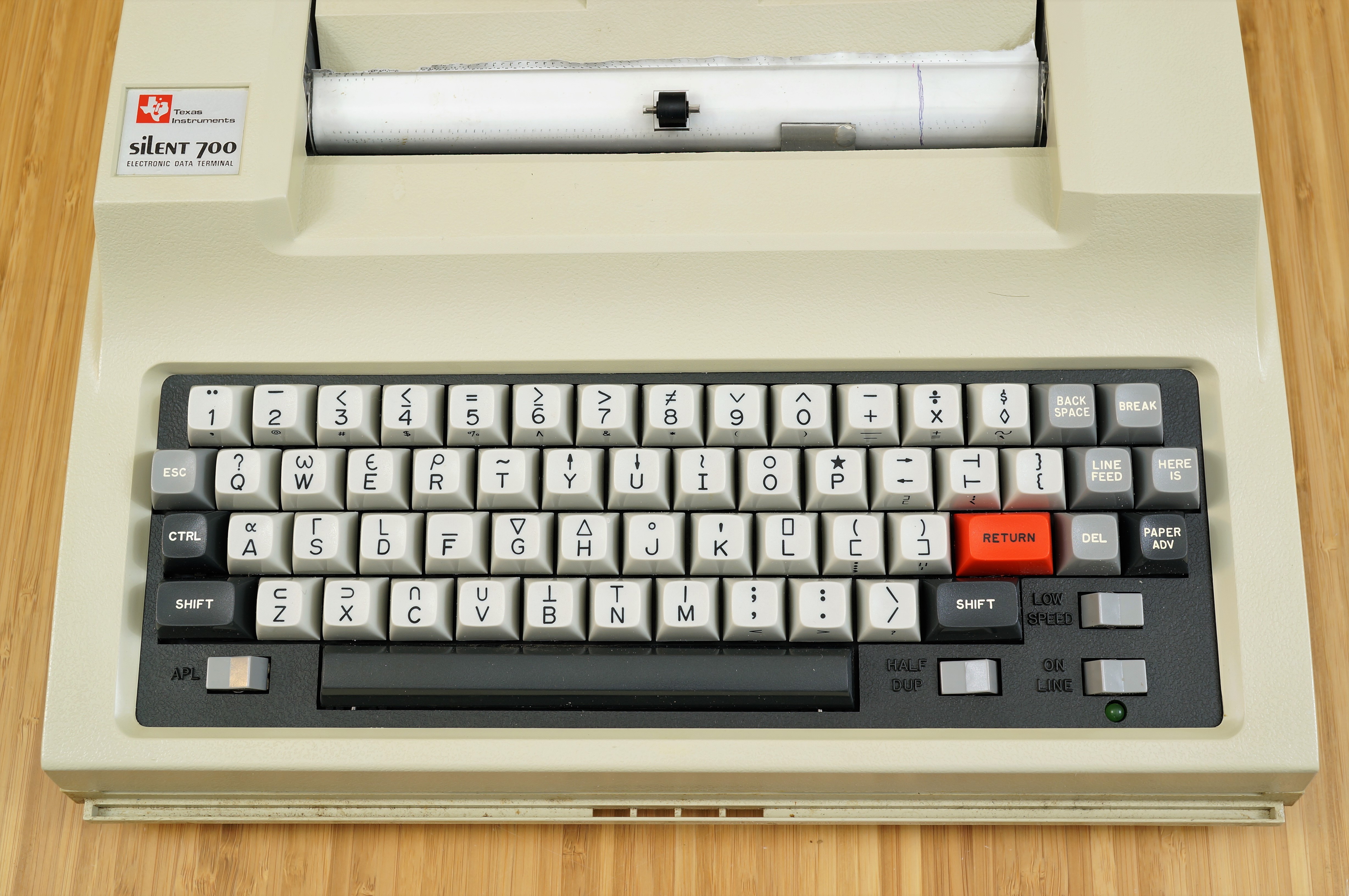 Some teleprinters had a "Here is" key, which transmitted a fixed sequence of 20 or 22 characters, programmable by breaking tabs off a drum. This sequence could also be transmitted automatically upon receipt of an ENQ (control E) signal, if enabled. This was commonly used to identify a station; the operator could press the key to send the station identifier to the other end, or the remote station could trigger its transmission by sending the ENQ character, essentially asking "who are you?"

Regarding the curved arrows: the German section reads (the same as the English section),

Not sure, what SML and SMR are, there is not notion of these anywhere else, but home is SBA, start of a line is SZA, cursor up is SMO, cursor down is SMU.

I would infer that these are movement codes used in SINIX documentation for editing (like for vi, etc), where S may be for “Sondertaste” (special key) or “Sonderfunktion” (special function), M seems to be for motion, Z for “Zeile” (line), and B for “Bild” (screen image), followed by a German abbreviation for the direction.

Edit: “M” may be also for “Marke” (cursor), avoiding this English/German mix.

Intertestingly, “Bildende” (end of screen), page up and page down, and end of line don’t have such a code. (These should be SBE, SBO, SBU, and SZE, respectively.)

An interesting key is also “Endmarke” (end marker; function application-dependent) – this seems to be a second function or contextual function of the CTRL key:

This key with three horizontal lines and an arrow, if I had to guess, I’d say a form feed (aka vertical tab). 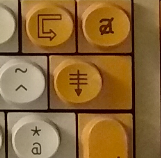 The three horizontal lines and arrow seems also rare. I haven’t found it on most Tandberg /Norsk Data keyboard and not in manuals (most are for 2215). But it’s included as character in the ROM. 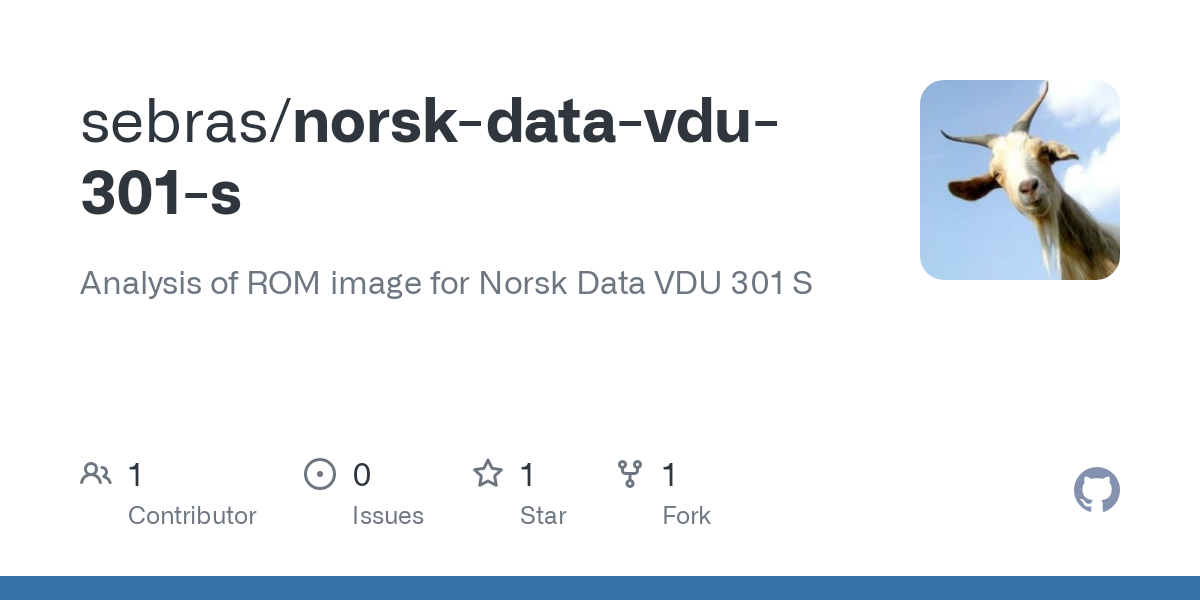 Analysis of ROM image for Norsk Data VDU 301 S. Contribute to sebras/norsk-data-vdu-301-s development by creating an account on GitHub.

I found three vertical arrows pointing up (and down) on this Siemens 6.600 keyboard, also 2 horizontal lines with arrow (top middle) 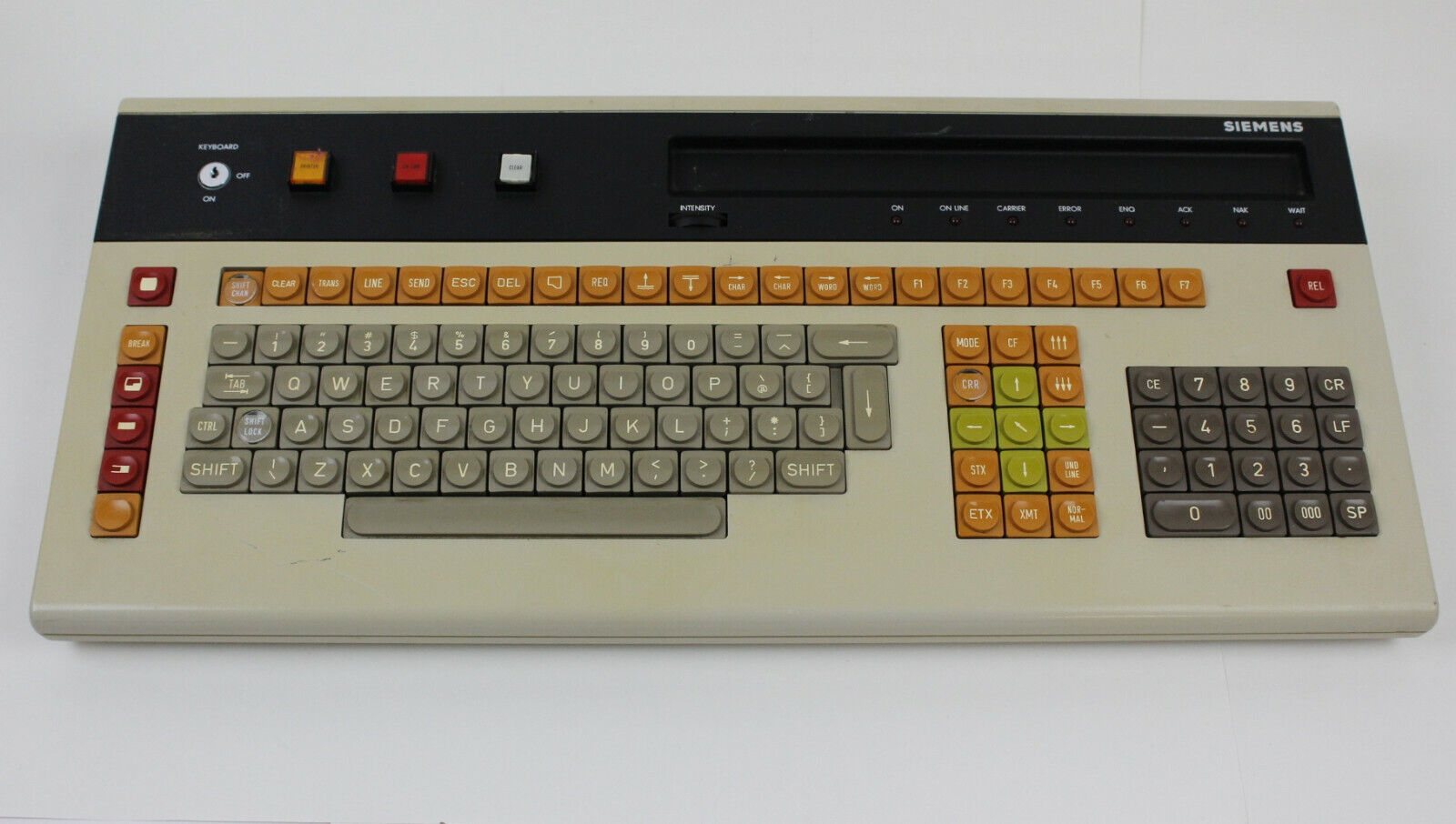 I have the manual. The 3 arrows meaning that the complete text will be moved in that direction (deleting top or bottom line). Maybe the same as the Tandberg key.
Probably these are special commands depending on the hardware and especially software. Maybe we should check the software.

Maybe the same as the Tandberg key.

This is no coincidence. Tandberg was (is?) an OEM supplier for Siemens Transdata Terminals.

Yes, but I mean the 2 specific keys.

I also wonder about the black keyboard. I found very few companies with those Siemens keyboard in black.
One is NCR (I found on commons titled NEC H0150…), and one is Taylorix (who made Triumph-Adler clones).
I have checked many computers and typewriters but I haven’t found any key like that. And I doubt that the DIN would help.

Some days ago the device has been sold. (65 EUR, 5 bids) sold as defective.
As someone can’t do much with it, it’s likely that a (German) museum’s owner bought it and publish it somewhere. Or maybe resell it.

I also wonder about the black keyboard.

If this refers to the one in very first post, I think this may be a terminal based on international standards – you were mentioning possible Japanese origins – that has been modified for German use. (Mind that this is not QWERTZ, as it would have been if this had been specifically designed for the German region. This is really an interesting mix of layouts.)

The peculiar lack of any markings suggest to me that this had been sourced for a very special purpose, like a one-of-a-kind system or an application that didn’t enjoy much of an exposure (like maintenance/processing tasks integrated with and restricted to a single company, or similar). If this had been the user facing part of a text processing system or had been meant for clerical work, I’d expect to see some proud manufacturer sticker on the front and at least some markings on the back.
(This makes me think that this had either been assembled from distinct parts for a special purpose, or that what we’re seeing here is not the original packaging.)

Those two are distinct. Form feed is 12 and vertical tab is 11 (decimal).

I too guess it’s a Japanese device (designed for the international market), based on the shape of the key caps. I owned a fascinatingly complex Japanese Japanese keyboard before I had to clean my attic. No wonder fax machines became dominant there. I speculate that the | |\| key is “delete”.

I agree what mc4004 and NoLand said.
Although of Japanese origin (and maybe quite wide spread), it’s probably nothing successful/notable.
But still interesting and rare.

I found this site with keyboard photos and characters. The only similar key (of the Tandberg keyboard) is ⇟ (Apple page down) and the Apple Home character ⤒

Edit: I have that keyboard and a couple other variants. If there are other mysterious keys there I can look it up - I have docu for the applications which make use of those special Tandberg keys.

I found this interesting key(s) on a Siemens Simatic 5, looking like a flower. It’s for a hardcopy. There are also keys with 3 horizontal lines and an arrow (Insert segment) and one thick vertical line with 2 diagonal lines (interrupt) and others. These are the upper oval keys, symbols are not printed on the keys but above.
Taken from photos on commons.

The buyer of the original unknown machine has still not given a feedback, what is quite unusual (in Germany). Maybe there are issues. But it’s also not re-offered or offered elsewhere. 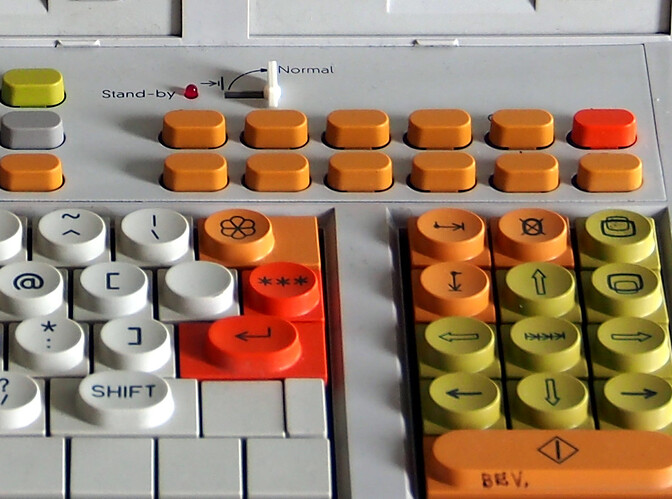 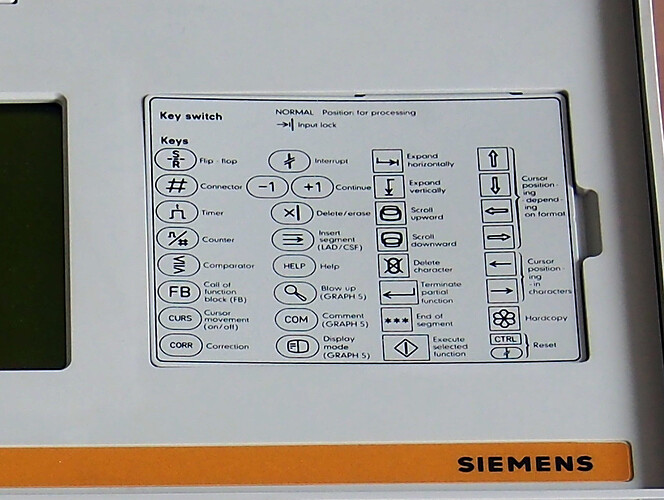 During research for my unknown line code, I first found in a mag tape reference manual with BCD code the Triple Plus sign ⧻, but it’s already mentioned.

Now I found on Wikipedia in Fieldata this control key
≢Spare, SOD (graphical in COMLOGNET variant)
SOC=Start of Control Block
SOB= Start of Block
SOD= (not found)
Triple Bar (striked) Unicode U+2263 not identical to

But bars are not vertical. And even when turned at 90 degrees the diagonal line is wrong.
This is ␥ delete U+2425
And this ⎚ is clear screen U+239A
This is both ⩩.
A Japanese character ⾎
So still a mystery

BTW, my favorite key is this one (top right), 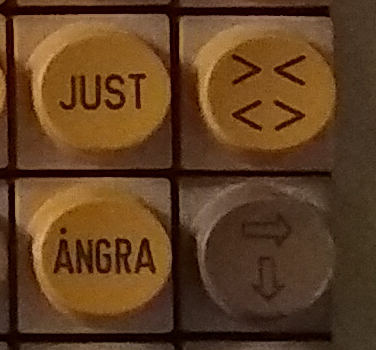 I call it the “angry key”. As it happens, just to the left and below is a key reading “ÅNGRA”, but this is rather disappointingly just “undo”. However, immediately to the left, there’s “JUST” – and if this works as a modifier, we may engage in just anger.

“Ångra” is Swedish for “regret”, which sounds like a good reason for “Undo”

The “angry face” key is a custom word-processing key for “NOTIS”, used for “center”/“expand” of the current line (I think).