I bring you, the noodle plucker, by IBM - a successful storage technology from 1964: 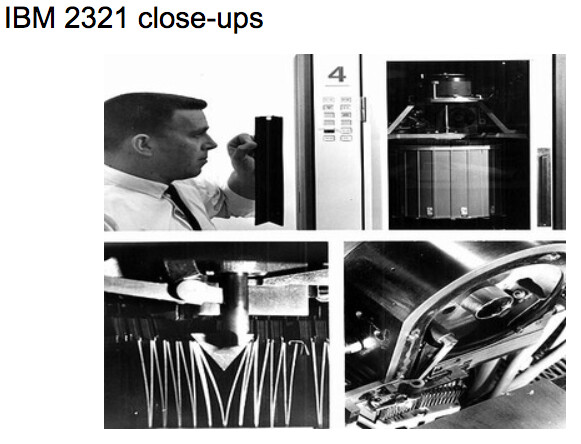 A bucket holds 2000 strips of magtape, spins into position so little piano-wire fingers can part the strips of tape to select the right one, the strip is then plucked from the bucket, whisked around a read-write cylinder which then reverses and threads the tape back into its cassette. Then the bucket spins again. Sub-second access time.

and when it thrashes…

Fractals of Change: Nerd Story – The Mystery of the Data Cell Drive

Daughter Kelly (that’s not her in the picture) gave me a one gigabyte USB Swiss Army Knife for Christmas. Of course one gig doesn’t take all that much space so it has blades, too. All this memory in a little package reminds me of the mystery of the...

“Up to eight 2321s could be attached … overall capacity of over 3GB. Reportedly the Data Cell required 23 liters of motor oil.”

“the distinctive THUM-SLAM-KERCHUNK-WHISH of the data cell as the cells rotated into position and were locked home, and a magnetic strip was selected and flew around the read-write drum”

“I once heard about how the data cell came to be. The story was that it was done as an MIT senior thesis project by a student whose professor had asked him to build a storage device which used all known technologies. So it uses magnetics, pneumatics, mechanics, hydraulics, optics, aerodynamics…”

(Resurrected from Google Plus)

IBM had another system that involved boxes of magnetic cards, slightly like NCR’s CRAM. I’m blanking on the reference, but it sounds even more baroque than either of these systems.

One the “all known technologies” front, the much earlier Monotype typecasting machine used mechanics, hydraulics, pneumatics, electrical switching - plus a great big pot of molten metal. While computers can generally be considered excellent heaters, I don’t know of any that relied on molten metal. Mercury delay lines are liquid at room temperature, and maybe someone once used liquid sodium batteries for backup power and lived to tell the tale.

Now you make me think of a hot metal computer (the “Linobits”?), where bits are casted as tiny protrusion on bars and transported via rails (a “railbus”?) to where they are sensed (mechanically, by brush wires, etc) and the molten again. We could even cast entire packages in form of code plates…