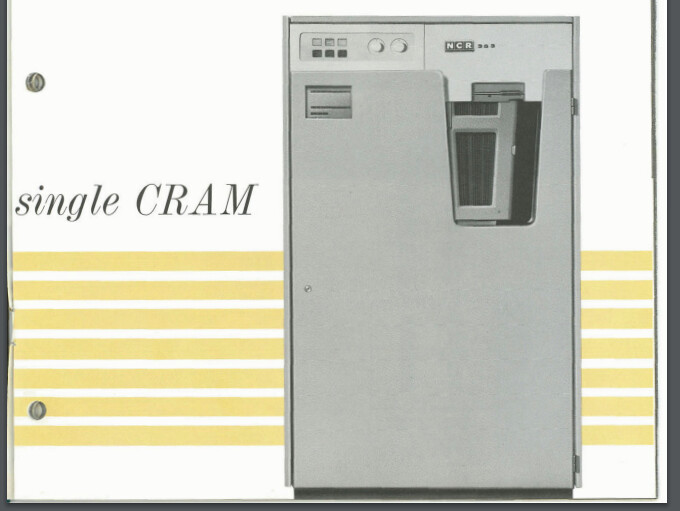 Via the Memory Guy:

Before there was DRAM (1969, Bob Dennard) or SRAM (1963, Robert H. Norman) there was another little-known random-access memory from computer maker NCR that was known as CRAM. The Memory Guy only recently learned of this technology thanks to a relative’s visit to the NCR Collection in the Dayton History Museum in Dayton, Ohio

There’s a link to a sales brochure at the CHM (28 page PDF) where we find:

CRAM reads and records data on mylar magnetic cards 14 inches long and 3½ inches wide. Each card has seven data recording tracks that can be individually addressed for reading or recording data. A single track has a storage capacity of 3,100 alphanumeric characters. Thus, each magnetic card has a total storage capacity of 21,700 alphanumeric characters.

Each CRAM file is designed to handle a deck of 256 magnetic cards with a storage capacity of over 5.5 million alphanumeric characters of information. Like reels of magnetic tape, the decks of magnetic cards have been designed in such a way that they can be easily mounted and removed from the CRAM unit. For ease of mounting and convenience in storing, the decks are housed off-line in a cartridge

When mounted on the CRAM unit, the deck of magnetic cards is suspended from two gating rods. The cards are individually selected by eight electronically controlled two-position rods. Each of the 256 magnetic cards has a unique binary notching configuration that permits it to be released from the deck when selected.

Once a card has been called for by the computer, and the rods in the CRAM unit have been properly set, the magnetic card is dropped from its hanging position on the rods. The cards are separated by 256 jets of air that permit the selected card to fall freely. After the card has been released, it will be pulled by means of a vacuum onto a rotating drum and quickly accelerated to a speed of 400 inches a second. 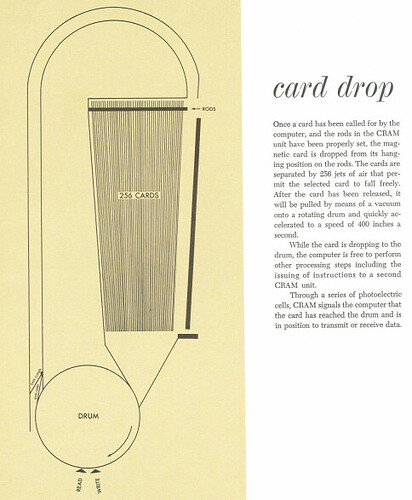 The Dayton History Museum has a fair share of interesting computing-related material, although it’s not enough of its primary focus to make it worth a trip for that alone (it’s worth the trip if you’re in the area, though, for sure!). There is an interesting exhibit on NCR’s efforts in the code-breaking work during WWII, of which I was not previously aware. In addition to the NCR history, the Dayton Scale Company was one of the original constituents of IBM, and there is some material related to that at the museum. They also have working Linotype machines and several presses, which, while not really computing, is one of my favorite things.

There is an interesting exhibit on NCR’s efforts in the code-breaking work during WWII, of which I was not previously aware.

Neither was I. – Is there any information available online?

Well, there’s this photo that I took: 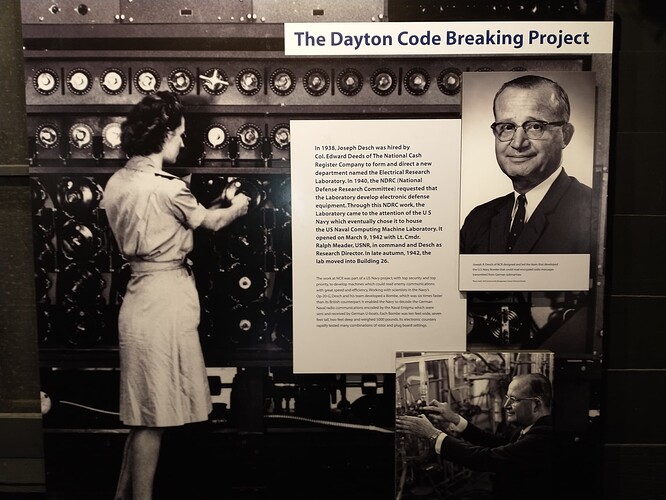 I’m not aware of other information, but neither have I looked closely.

The bottom rotor spun at a speed of 1,725 revolutions per minute, which allowed the machine to complete its run in only twenty minutes. Much of the work was done in secret, with WAVEs soldering and wiring the Bombes without knowing what they were building. Elaborate security included round-the-clock tailing of Desch, whose German heritage was investigated. To solder the twenty-six connections for each rotor the WAVES were given twenty-eight colors of wire so that it was difficult for the WAVES to memorize the wiring and report it to German agents. Everyone was threatened with death for talking about their work. Still, with twenty-six connections and twenty-six letters of the alphabet, the WAVES often figured out they were working on cryptology. The bombes were shipped to the Naval Communications Complex on Nebraska Avenue in Washington, District of Columbia. By the end of 1943, 77 Bombes were operational

Ah, I knew about the US “Bombes” and that quite some progress was made as compared to the original design (regarding speed), but I had no idea that these were made by NCR. (However, thinking about it, not an unlikely candidate.)
BTW, there were also the US Army Bombes, using telephone relays instead of rotors or drums, and these were developed by Bell Labs.

George A. Miller’s Magical Number 7 (plus or minus 2) in action, avant la lettre…