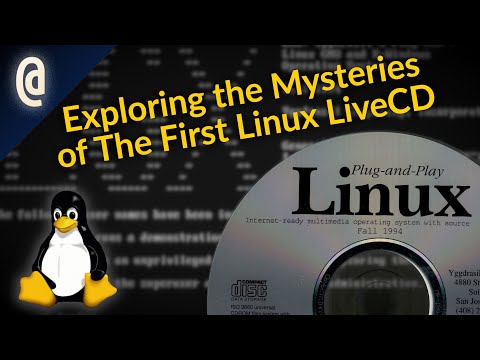 (I think I recall my first CDROM hung off the sound card, which had a port for the purpose.)

Among the oddities, Yggdrasil supported

Watch the whole thing - from LI to LILO to compiling Nethack to dialling California for email delivery.

Both the early sources and the early CDROM images are now found online.

(I think I recall my first CDROM hung off the sound card, which had a port for the purpose.)

My first CD-ROM drive certainly hung off a sound card (a Media Vision Pro Audio Spectrum 16), it was very common “back in the day”! Most Creative cards had IDE ports, while other manufacturers had other interfaces; the PAS16 that I had was a proprietary interface of some kind with very few pins (I do not know what; some searching suggests it might have been LMSI with a CM 205 drive, which is a 16-pin interface, and the drive looks like what I remember), and as far as I know there was only every the one CD-ROM drive for it, but some PAS16 cards had SCSI interfaces.

Sadly, my card’s interface was not supported by Linux (and I do not believe ever was), so I used Slackware floppy disk sets to install Linux; I would use rawrite.exe to write the disk set images to floppy disks from DOS, then reboot to install them from Slack. It took many disks to install or update a system. Interestingly, the drive that came with that card (which sadly is long lost to time) was a 1x CD-ROM drive with a manual tray (as I recall, at least) that had no electronic eject button or ejection motor. It also jingled like a small bell when seeking.

I can’t compete. I think, my oldest copy of a Linux distribution is MkLinux Developer Release 3.0, which is from 1998. But this came with a nice book and 2 CD ROMs (and a price tag reading ATS 749, which would have been USD 58 + inflation) – and it runs on PowerPC on a Mach kernel. The first release was 1996 by Apple. — Yes, Apple once did a Linux distribution! (DR3, however, was maintained/distributed by Prime Time Freeware and only “sponsored by Apple”.)

Edit: Regarding the original release date, the book says “summer 1996”, one of the two CDs is the original DR1.0 (as by Apple, but with a Prime Time Freeware note), which reads 1997, though.

I’d forgotten about that one. The first live CD I remember using that was actually usable was Knoppix around Y2K. Been a long time since I’ve needed that kind of system. Does anyone remember the linux from Fabrice Bellard who wrote tcc, which compiled the entire OS on the fly as you ran it? That was cool.

Regarding Farbice Bellard, this is new to me – I know only his JS implemtation(s), and this explains some. (That is, besides QEMU, FFmpeg, etc, naturally.)

Does anyone remember the linux from Fabrice Bellard who wrote tcc, which compiled the entire OS on the fly as you ran it?

I do… TCCBOOT… he has a fair number of outstandingly impressive projects in maths and computer science:
Fabrice Bellard’s Home Page

I was working/living in the US at the time and using mostly Sun4 Unix (Sparcstations, servers, etc.) and having heard about this new Unix for PCs decided to have a go, so bought myself what I considered a reasonable PC for the time (I had a $1000 budget) and got (I think) a 486DX-66 with 32MB of RAM, 280MB IDE drive, Graphics card and colour monitor and an NE2K Ethernet card. It had a floppy, but no CD.

The install came from the UK on a DC150 tape which I unpacked on Sun server, set it up as an NFS mount, created 5 (?) floppys to boot from and off it went…

… And after a short while we were running Linux with X windows on a system faster than the average Sparcstation at the time and costing a fraction of their price.

Myself and friend thought “well, that’s then end of commercial Unix then…” Which didn’t quite happen however.

I brought the system back to the UK where I rebuilt it with Debian and more or less stuck with Debian ever since (Devuan now though).

I think my first was Slackware, from floppies, downloaded at work and written to floppies (perhaps with some little difficulty) on Sun workstations. (Edit: posted on gplus here.)

On my first (work) trip to the US I bought a CD or two - Walnut Creek rings a bell. I might still have them.

I well remember a live CD linux which appeared as a cover disk on a magazine. Maybe Linux-FT? Yes - turns out I posted on gplus with an album: 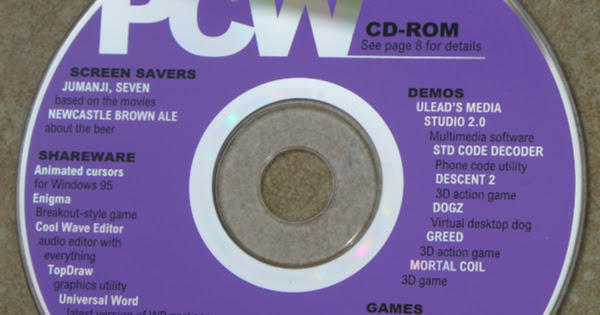 But Knoppix was the first live CD I adopted as a preferred tactic.

I think there might be some time line skew here, 1992 sounds a little bit early for that system. I could be wrong, but in particular the RAM and hard disk size seem large for $1000 total system cost. Ethernet was also still vanishingly rare in the US consumer market for another few years, although I don’t know what an NE2000 would have cost quite yet.

The meteoric descent of PC prices was under way by that time, so perhaps I’m mistaken, but I feel like about 1/4 to 1/3 of that system would have put one back $1000 at least where I was living, at the time.

I think there might be some time line skew here, 1993 sounds a little bit early for that system. I could be wrong, but in particular the RAM and hard disk size seem large for $1000 total system cost. Ethernet was also still vanishingly rare in the US consumer market for another few years, although I don’t know what an NE2000 would have cost quite yet.

I was living & working in the US, just outside Boston at the time. It might have been early 1994 but I’m fairly sure I was back in the UK by then.

I was told about a bunch of guys building PCs’ (early box-shifters, I guess) who were working out of a lock-up/garage, so I drove out, had a look, then they made it up for me and off I went. They had racks of components, motherboards and cases which they were importing from (I think Taiwan) and workbenches to assemble them on.

So it was a very no-name system - I told them my budget (paid cash), what I wanted and off they went - I do recall the graphics card they initially gave me would not work with Linux (at least not X windows) and they were shocked that I wanted a lower quality one, arguing about the merits, etc. of the one they wanted to put in…

It was also a 14" monitor, but my eyesight was better then …

It’s also entirely possible that I borrowed the NE2K Ethernet card from work as we were using PC’s with DOS with some software that let them connect to the Sun NFS servers at the time.

Rereading, I think I went pedantic about nothing! (I didn’t mean to be pedantic at all, I plead morning before coffee?)

My first Linux was on that same DX/50 (and indeed the previously mentioned 1x CD-ROM was installed in it), but in late 1994. It came off an Info Magic CD set, and was (I believe) Slackware 2.0; the CD set also had Debian, Red Hat, and the Yggdrasil from the article above, but due to my floppy disk limitations I installed Slack.

It also had an interesting Slack install using “UMSDOS”, which was a filesystem that mapped POSIX sematics onto MS-DOS disks, so you could unzip Slack into a directory, run some batch file that loaded Linux from DOS (I seem to recall that it used LINLOAD.EXE?), and be off to the races without re-partitioning. Unlike VFAT (which came not so long later), the files were not necessarily in a recognizable structure. I seem to recall that some directory names were recognizable, but that many files had names like UMS00001.DAT or something similar, and the driver must have used some metadata stored alongside to map the information to POSIX filenames and permissions.

Myself and friend thought “well, that’s then end of commercial Unix then…” Which didn’t quite happen however.

I do very much think that that early-to-mid-90s time frame is the time frame that put “workstations” on notice that the PC world was coming for them. The 386 might have started it, but I think that the 486 DX, in particular, with its on-board FPU and full 32-bit system bus, was a level of competition that the workstation market had not previously experienced. The rise of Linux provided the operating system to challenge their capabilities (and FreeBSD was well on its way, as well).

My first linux was Slackware; it was on a CD-ROM, but not a live one. You had to install the root filesystem from floppies, and then install packages from the CDROM. This meant getting your CD drive working more or less manually, which was tough for me at the time. I didn’t stick with Slackware for very long: I never managed to get the sound-card working. After many hours fussing with dot clocks I did eventually to get the X-server to start, but I never managed to get a window manager working.

This would have been around 1996; my system was an NEC P-133 with 32 MB of RAM. That Slackware disk was borrowed form a friend, so I don’t still have it. I do still have a lot of my own disks, but they are from a slightly later vintage. I think the oldest one I have is a Linux Mandrake distribution, which was supposed to bring the ease of use of Windows to the Power Of Linux. It didn’t. But it was a step in the right direction, and there are some features from that disk’s installer that went on to be rolled into the Ubuntu installers for years. Speaking of which, it’s not really retro, but I did save all my old Ubuntu disks, going back to Hoary Hedgehog in 2005, when they would still send you physical disks for free if you asked them to.

You had to install the root filesystem from floppies

Same here. My Slackware was the 1998 Power!-CD LINUX from German publisher Sybex. It has 3 CD-ROMs. Original price was 30 DM, but was reduced to 1,50 EUR.
I recently installed it on an old laptop, as almost all modern Linux (except Lubuntu) had issues detecting the old hardware.

Not sure if this was my first Linux. I also had some magazines. My oldest one, I still have is probably a 1998 Suse 5.3 magazine as the Slackware I bought later.

Key informations in the magazine. I had some fun and learnt much. But best was FreeDOS and the emulators.

I remember using DEBIAN linux,several years ago. I can’t remember if I had it from a
CD-rom or downloaded the CD rom image. I used it becase I had no network card,
just dial up 9600 baud modem. Red Hat wanted you to install from from a network.
Ben.

For me it was 1995, and it turns out I took some photos of the machine just before I gave it away - a white box Pentium P75: 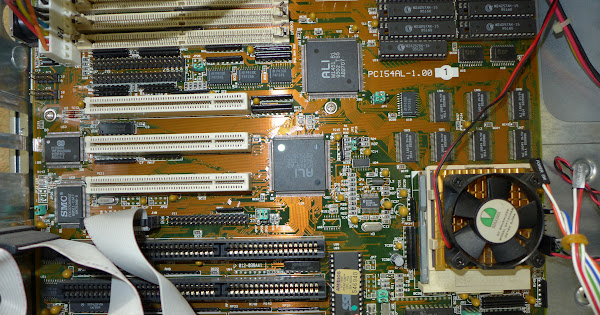 Same here, SLS, kernel 0.99pl12, 1993 I believe. I inherited a half-configured UNIX bulletin board on the short-lived NVN (National Videotex Network - National Videotex Network - Wikipedia ) service, a would-be competition to CompuServe, and my predecessor uploaded this Linux thing there, some 20 or so floppy images, which I found fascinating: unlike superficial UNIX-like shells and whatnot, this was the real deal, a full-blown UNIX clone! Wow. I set it up on a then recently retired 386SX machine with its whopping 70 MB MFM hard drive. (That machine lived on, with an upgraded 486DX motherboard, for a few more years as my main Linux server, by then running Slackware.)