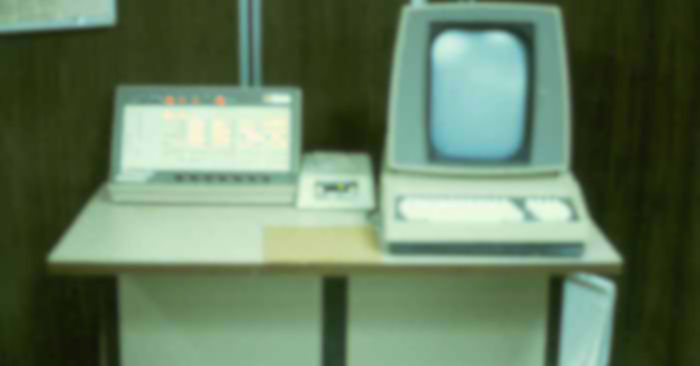 An interesting story, to be sure.

The year was 1973. They were high school seniors in a work-study program with NASA, tasked with testing the limits of the Imlac PDS-1 and PDS-4 minicomputers. Their maze program flickered into life with simple wireframe graphics and few of the trappings of modern games.

(And as for strict interpretations of “first”, well, I don’t care too much about that - if we turn up interesting related early developments, so much the better. It’s an exploration, not a contest.)

What about first PONG like game for the TV,
all analog,

Mind that there was also Spacewar 4.4 in 1963.
It’s a bit debatable, if this is really a first person shooter, but the respective own spaceship is pinned to the center showing everything else in relative motion. It’s as good as it gets the planar universe of Spacewar. It’s much like a cockpit view onto a radar scope in the respective ships – and, in deed, the tubes were the kind used for radar scopes for real. In German, there is the neologism “Egoshooter”, which could apply as it is a bit more abstract in concept than FPS. (The code has a few bug, but they were minor and fixable.) 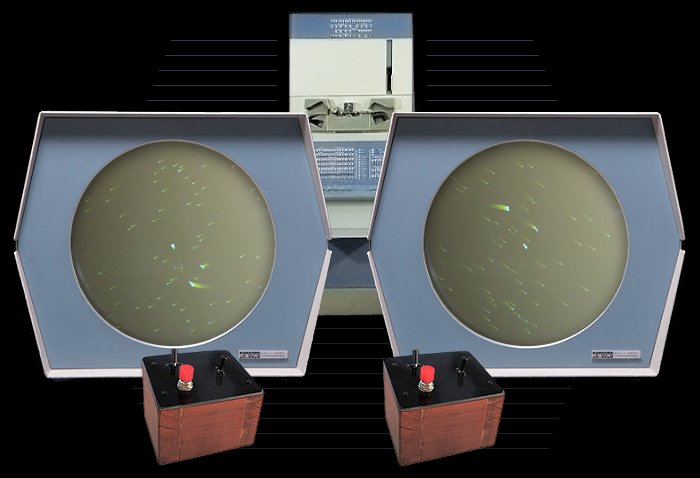 Here’s the story of the code and a discussion, whether the term FPS could apply or not: https://www.masswerk.at/spacewar/inside/insidespacewar-pt10-dualspacewar.html

Hmm, it might be an interesting discussion point, but I’m afraid it’s too much of a stretch for me: if you can see yourself, then you’re not being yourself - in cinematic terms, it’s an over the shoulder shot, not a point of view shot. It’s not uncommon for (car) racing games to offer a choice of perspectives: those where you can see the car from outside are, for me, easier - but not authentic, and not first-person.

Yes, it’s a complicated topic. We are lacking accurate (and/or universal) categories here.

As mentioned above, in German, there’s the pseudo-English term “Egoshooter” (but not first person shooter, which isn’t even a word). This concept rather relates to the subjectivity of the view (the abstract kind of perspective into the universe, rather than the pseudo-perspective provided by the viewport rendering). I’d argue, it’s an “Egoshooter” (i.e., the game universe is essentially mediated by a subjective view, including all the implications thereof). On the other hand, it’s certainly not a pseudo-3D view. But there’s also no concept of a 3D universe or 3D-to-2D mapping in Spacewar, the universe is essentially planar and toroidal. Is there even something like a first person perspective in a planar universe? (Flatland wouldn’t make for a great or even playable game.) It’s much like, either dismiss the existence of that game, because it doesn’t fit our categories, or adjust the categories… As it is, we just don’t know what it is or how to call it (since the English term includes the existence of a pseudo-3D perspective as a prerequisite.)

BTW, this an interesting case of perception and historic recognition relying on the extent of certain concepts in a particular language, prevalently used in the discussion.

Could use a new topic First Pong like game.
http://pong-story.com/1958.htm 1958
Arcade games do make a interesting side of computer
history.

Is Defender an egoshooter? Robotron? I’d doubt it. Is FPS not an exact translation of the term?

I’m struggling to relate this to Retrocomputing…

Flatland is, I think, the right analogy for the world of Spacewar! - it’s a 2D world, as is the world of Pacman and Defender and Space Invaders, but with more of a physics to it. But the perspective of a being in that world is a world projected onto a 1D visual field. It feels to me like that’s more like our hearing than our sight, although the analogy is still strained. One constructs as full a model of the world as one can, of course, and the mental model of a Flatlander might be somewhat like the radar screen of Spacewar! As players of the game, we’re getting an omniscient view, something like the mental model, but without the in-game perception.

(Are there non-visual and non-textual and non-linguistic physics-based computer games, using for example only a binaural experience? Yes indeed - via this discussion. But creating a realistic sound field is very demanding computationally. So a third person abstract Pong-like game, especially in the context of retrocomputing, is a more likely find than a realistic physics game, if we’re thinking of sound fields. A game like Simon, maybe, although that has visuals too. Or perhaps Merlin, with the same caveat.)

Admittedly this is a bit of a pet issue of mine after rediscovering the game. My thinking is roughly along the following line:

In the particular case, we can even follow the progress: First, there’s the original, map-like game, then, there’s an attempt at a version of the game with one ship at the center, but both players sharing the same screen and view, followed by the next step providing each with their own screen and view, putting each player at the center of their perspective into the game.
To me, it’s a bit sad that we can’t appreciate this important intermediary step, just because we do not have a word for it and are just going for flat versus extruded model.
(Especially, since the consequences are rather spectacular and even hilarious: shots drifting and curving away as your ship is subjected to gravity or turn on its own, the opponent’s ship orbiting in epicycles, the background stars forming a somewhat rainy experience as they reflect your own movement.)

Personally, to me this was much an adventure in retrocomputing or software archeology. You have a closer look at this assembler source, nobody seems to care about. Probably, nobody cares, because it doesn’t do a sensible thing. But, why is it there at all? Why would anyone attempt this mod, what was the intention? As soon as you’ve figured this out, it’s easy to apply the fix, add a second screen to the emulation, and – voila …

P.S.: There seems to have been a true multiplayer FPS version of Spacewar. In the early 1970s, there was a networked version of Spacewar, called “Orbit”, which allowed players to connect remotely into the game. At some point, this was said to feature a pseudo-3D perspective. However, I can’t put a date to this or even imagine, how elevation was added to the game. (I’d assume, it would be about gravity and orbits in 3D, but this isn’t based on anything. I’m also not sure, how you would be able to shoot you opponent, if everyone is at her or his own orbital plane. The game is just that essentially 2D!)

I do agree that putting the player’s ship at the center of the screen and moving the world around - as Acornsoft did with Starship Command (in-browser play!) - is a step closer to a first person perspective. (And with a two-player game, that’s helped by having two screens. Although Spy vs Spy splits the screen, as do some other two-player games.)