There’s a nice blog post on the quirks and joys of installing and running A/UX on a Quadra 610:
https://blog.pizzabox.computer/posts/installing-aux-quadra/

In this post, I’m going to go through the process of setting up Apple’s A/UX on a Quadra 610. It’s been a long time in the making - I think I had the hardware for nearly a year before I finally got A/UX running properly!

Wait, what is A/UX?
I’m not misspelling AIX, the IBM Unix that ran on the Apple Network Server range. It is a hybrid of Unix and the classic Mac OS, but it isn’t related to the Mac OS X we use today. A/UX is:

You can log in to and use A/UX in a few modes. The main one is a Macintosh Finder interface that can run normal Mac programs and Unix programs - both console ones (in the “CommandShell” terminal emulator) and X11 ones (via “MacX”, a rootless X client).

Recently, I got hold of my old Centris 660av with the intention of trying A/UX myself, since I was quite sure it was on the compatibility list. Alas, neither the Centris/Quadra 660av nor the 840av are compatible, while they feature all the prerequisites, like a 68040 processor, FPU, MMU. This seems to be due to their very special hardware setup and their special 2MB ROM.

However, there’s still Shoebill, a special Mac II emulator to run A/UX (and nothing else) – maybe worth a try:

A Macintosh II emulator that runs A/UX. Contribute to pruten/shoebill development by creating an account on GitHub.

Installation media, software and guides are to be found at http://www.aux-penelope.com
and ROMs (required for the Shoebill emulator) on various sites, e.g., https://www.macintoshrepository.org/7038-all-macintosh-roms-68k-ppc- 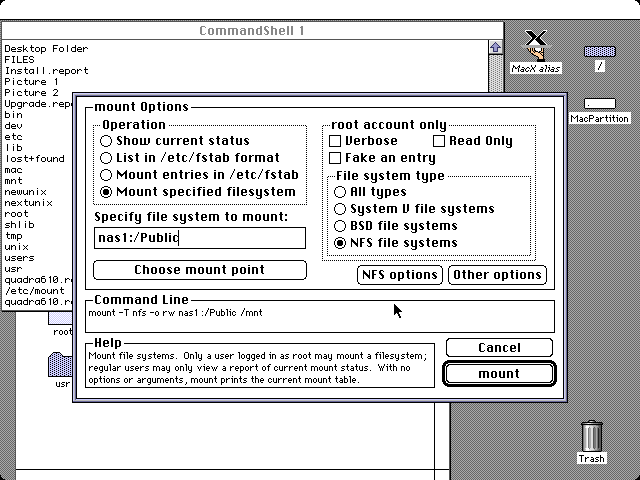 Sorry gonna delete the thread I made for the sake of consolidation. I figure this is worth sharing.

From the (now deleted) other thread, comment by @Singletona:

Feels very interesting, and I sorely wish A/UX had caught on because it feels pretty neat. Combine with the toolbox routines to give a desktop? I like what might have been especially if the more publsiher centric programs over.

A bit of trivia: MacX survived to become a stand-alone utility and Apple’s official X-server for classic Mac OS. (However, as things evolved, it may have been a bit clunky for the purpose, as far as I remember from trying to run CDE applications in full color from a HP-UX server in the late 1990s. It kind of worked, but Win 98 equivalents were objectively better at the job. [Edit:] Thinking about it, any performance issues may have been related to using a PowerMac and a New ROM, a setup quite far from the original A/UX integration.)

Anyone have any idea if A/UX can be patched or someone taking the concept and trying to get a contemporary unix working better than A/UX did?

Id don’t think so, since there’s a strong dependency on the specific memory management unit and always was restricted to a handful of machines.
Otherwise, for classic machines, there’s MKLinux (originally by Apple – yes, they did a Linux distribution! –, then maintained by Prime Time Freeware), running on a Mach kernel, but this doesn’t have a Mac OS process.