Justin Collins had the idea to bring a 1998-era 660LX palmtop to DEFCON for retro notetaking purposes:
Reviving an HP 660LX in 2019 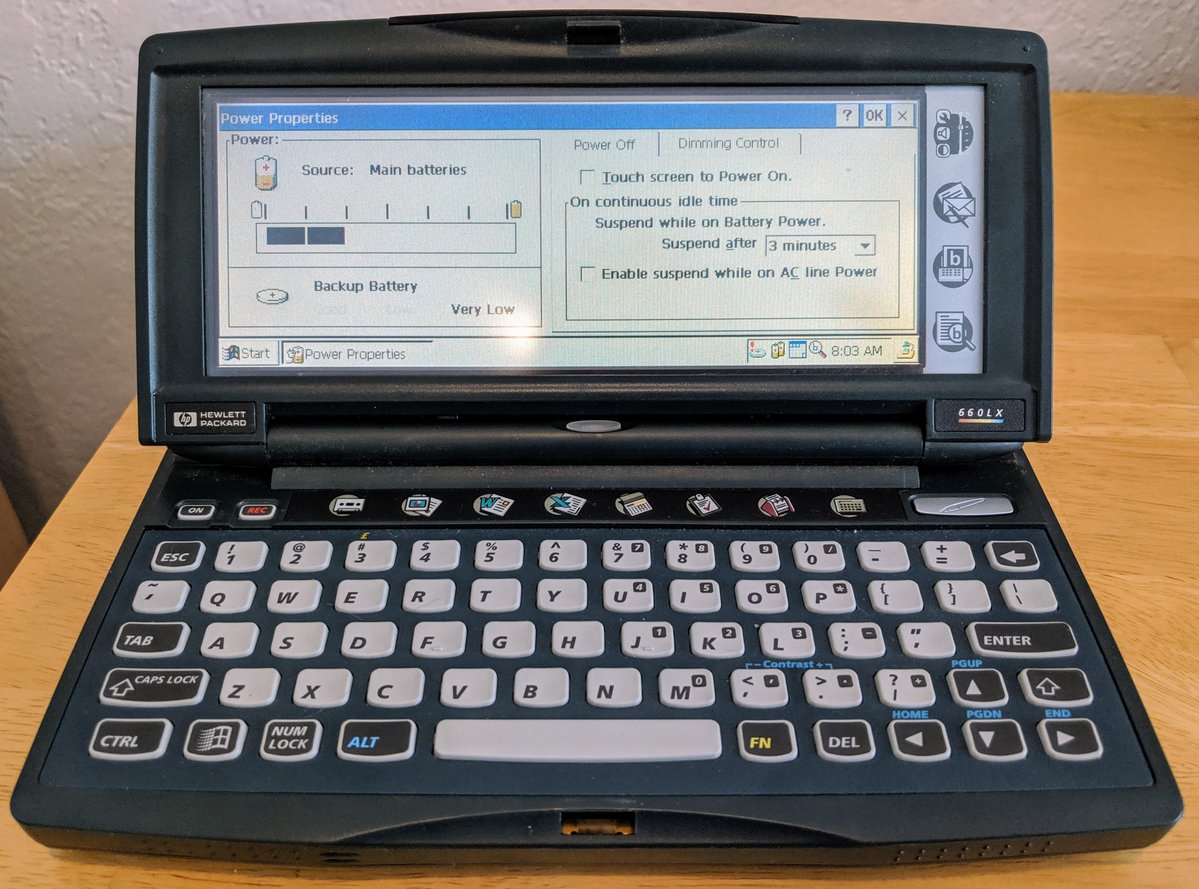 Although there was, back in 2008, a Linux port (JLiME) for this machine (running a Hitachi SH3 at 75MHz), Justin had no luck with that, and got Windows CE updated instead. Unfortunately the browser can’t do modern secure browsing. 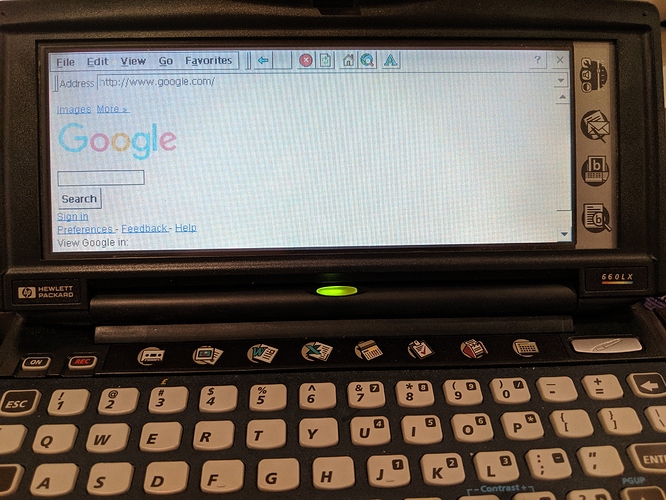 It’s quite a nice looking little machine though, from a hardware perspective. 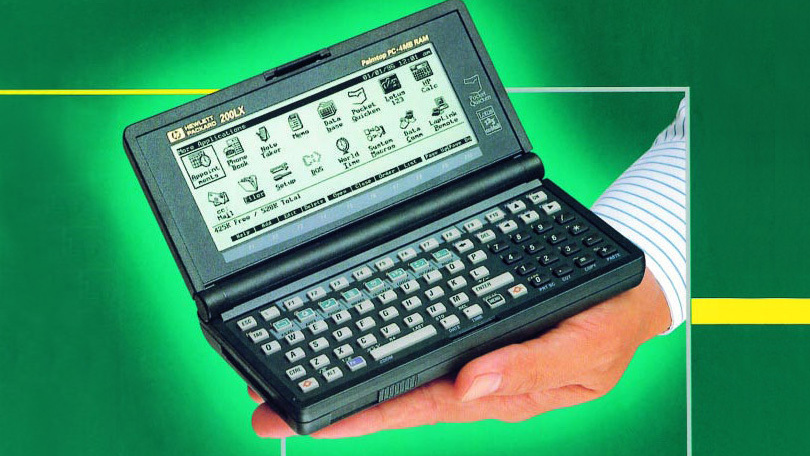 During the 1990s, Hewlett-Packard produced a line of memorable portable machines.

The funny thing with Windows CE: I recall, when Windows CE was introduced, at the news agency I was working with then, we had a great time laughing hard at Windows CE. Partly for MS joining the venerable effort of designing an OS for the purpose of controlling washing machines and then selling it to end users (as pioneered by Sun with Java), but also for the job it did on the particular purpose. – The strange thing is, from today’s perspective, there seems nothing odd or wrong about Windows CE.

(Also, MS introducing yet another flavor of a web browser seemed much like a dangerous threat back then.)

I think perhaps very good touchscreens have made quite a difference? I remember not being very much in love with the Psion 5, or maybe their Revo, which had a stylus based screen. It seemed to me I could do what I needed to using the keyboard on my Psion 3. (And at work I’d use very many keyboard shortcuts, so I’d only rarely move my hand to the mouse.)

Touch screens (or rather, stylus screens) were certainly not great then – and the same is true for Symbios systems, etc. But – as I remember it – we were especially amused by the performance of Windows CE and the job it did. (I guess, it may have been still in beta.) In retrospect, it was probably for the entire idea of cutting down an OS and what seemed to be “pretending” that there was still a OS with common usability and fitness. Today, with mobile OSes having become mainstream, Windows CE doesn’t appear to have been that terrible at all.

(Also, as indicated, we were very biased against MS, especially against their web browser business. There had been a first “happy time”, where building websites mostly meant building for Netscape Navigator, and things progressed rather rapidly with each revision. Also, this was quite a Netscape shop with sites served from Netscape Enterprise servers. [Which was, however, not the greatest thing of all, as well. However, it featured server-side JS, which I never heard of being used for any purpose in earnest.] Then, there was a rather amusing attempt with MSI IE 2, and then Internet Explorer 3 caught on, but exhibited some terrible bugs. E.g., one of them was a caching bug, which prevented then customary cover pages or front matter to what was then perceived as “chapters” of a web-site to show once and never again, until the user ran out of disk space and the disk cache was eventually purged. Resulting in the need for hastily redesigning and reprogramming every navigation frame in existence. Also, the infamous J-script implementation proved quite a nuisances and debugging IE 3 was horrible at best. Then, MS’s implementation of Java became incompatible, resulting into NT crashing on encountering pages embedding standard Java. Then, we had just started experimenting with http1.1 and streaming content [http frames], when IE 4 was introduced and the implementation of http chunks in the Windows http stack [used by IE, but no other browser] proved buggy and keep-alive had to be turned off on every server and timeouts had to be reduced to a bare minimum. We felt like spending half of our time cleaning up behind MS and very much like sticks being thrown between our legs all the time.)

Bonus content: A recollection of frames as rendered by Internet Explorer 2.0 beta 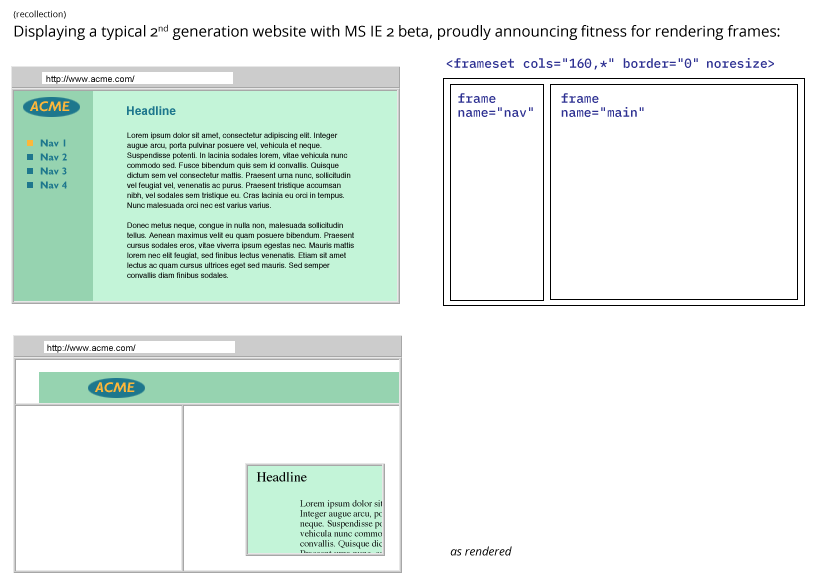