How about a book full of them… No computer required! 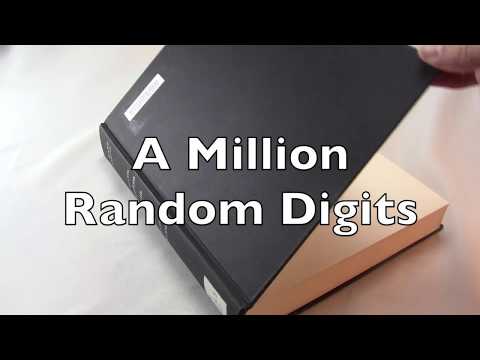 This chap; Chris Staecker does have a few interesting videos if you want to waste a few hours

Nice that they lay out how they did it - and why - in the intro. Not just a big list of random digits!

The random digits in this book were produced by rerandomization of a basic table generated by an electronic roulette wheel. Briefly, a random frequency pulse source, providing on the average about 100,000 pulses per second, was gated about once per second by a constant frequency pulse. Pulse standardization circuits passed the pulses through a 5-place binary counter. In principle the machine was a 32-place roulette wheel which made, on the average, about 3000 revolutions per trial and produced one number per second. A binary-to-decimal converter was used which converted 20 of the 32 numbers (the other twelve were discarded) and retained only the final digit of two-digit numbers; this final digit was fed into an IBM punch to produce finally a punched card table of random digits.

Production from the original machine showed statistically significant biases, and the engineers had to make several modifications and refinements of the circuits before production of apparently satisfactory numbers was achieved. The basic table of a million digits was then produced during May and June of 1947. This table was subjected to fairly exhaustive tests and it was found that it still contained small but statistically significant biases

The table was regarded as reasonably satisfactory because the deviations from expectations in the various tests were all very small—the largest being less than 2 per cent—and no further effort was made to generate better numbers with the machine. However, the table was transformed by adding pairs of digits modulo 10 in order to improve the distribution of the digits. There were 20,000 punched cards with 50 digits per card; each digit on a given card was added modulo 10 to the corresponding digit of the preceding card to yield a rerandomized digit. It is this transformed table which is published here and which is the subject of the tests described below.

Anyone who attempts to generate random numbers by deterministic means is, of course, living in a state of sin.
—John von Neumann (1951)

I’ve been doing some work over the last couple of years to recreate this workflow using modern hardware. Two things from the original I probably won’t be creating:

JvN’s quote was likely more talking about crude methods of the time such as centre-squared. RAND’s methods were not deterministic in any way.

It’s rather hard to generate a truly non-deterministic clock signal from standard components operated according to spec. Avalanche and diode noise generators typically require operating voltages well above what you’d find on a 5 V on 3.3 V logic system. You can fudge the bias voltage for a two-transistor avalanche noise generator from the positive and negative voltages of a MAX232 chip, though. So far, I’m finding that the rather uneven frequencies you get out of a Schmitt trigger oscillator are wobbly enough to feed a decimal counter to get 4-5 random digits/second.

ERNIE entered service on 2nd June, 1957 … The underlying principal of random number generation was the random frequency instability of a free-running oscillator… ERNIE was upgraded in 1973 [and is, as of 2019, a fifth iteration]

Edit: more on the first ERNIE here, with photos.

There’s an ERNIE photo gallery here, which tells us a “gas neon diode” was the source of randomness, and that it took 10 days to select 2000 random winners. The government actuary department is responsible for overseeing the correctness of the selection. 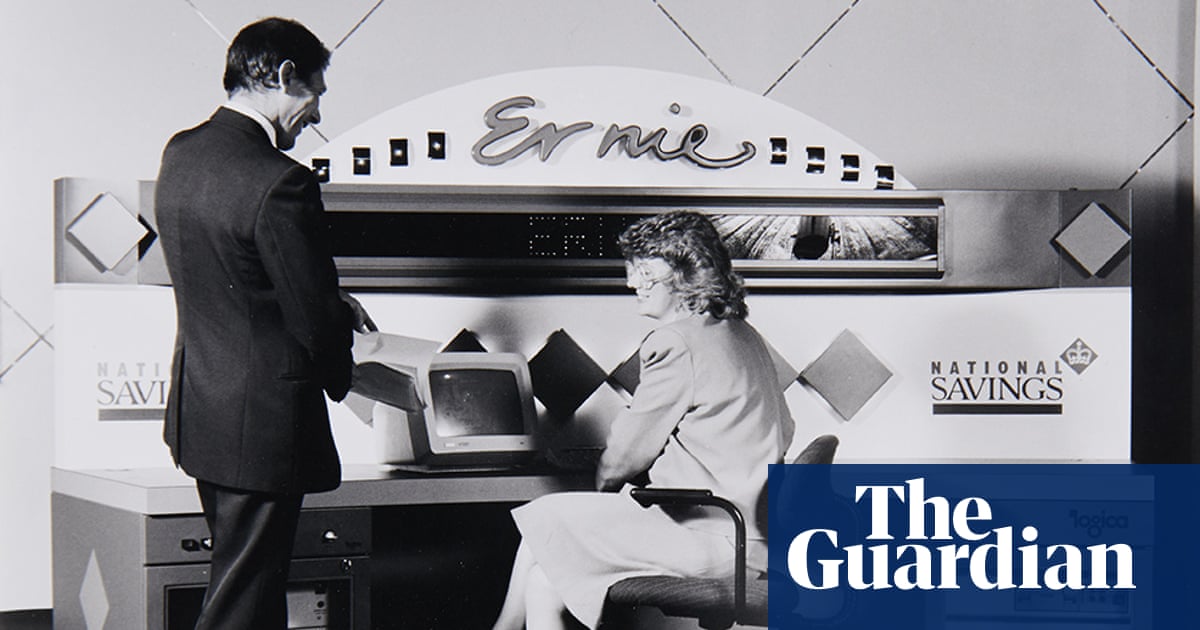 The evolution of Ernie: the National Savings & Investment machine

The original Ernie was launched in 1957 by the appropriately named post master general, Ernest Marples, to generate random numbers for NS&I’s premium bonds

JvN’s quote was likely more talking about crude methods of the time such as centre-squared. RAND’s methods were not deterministic in any way.

Indeed, not applicable to RAND or ERNIE. But, I would say, applicable to every pseudo-random approach, including centre-squared but also linear congruential, linear feedback, and all others. I suppose the term “pseudo-random” was introduced to cover the difference.

Edit: notably, von Neuman’s name is also associated with a simple way to remove or reduce bias, by taking pairs of bits from a source, and rejecting 00 and 11 while mapping 01 and 10 to the two output bits. Of course this assumes that adjacent bits are uncorrelated.

In my youth I came across random number generators which included a small radioactive source. This was used for (very) serious encrypted communication. I’m wondering why this seems to be out of fashion, when the various noise generators or entropy collectors which are always discussed all seem to have some issues or limitations. 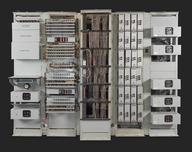 And in my youth I did make a random number generator with a friend - using those little neon bulbs with a capacitor and resistor to barely bias them on. We just had flickery lights but I guess you could have connected them to counters, etc.

Today? Just point a camera at a wall of lava-lamps… See “lavarand” and e.g. I suppose our fundamental sources of randomness are heat, turbulence, and quantum mechanics. Perhaps a reason not to use radioactivity is that you’d need a very active source if you wanted a lot of entropy, and that means more shielding and a shorter half life. I like the simplicity and safety of the neon diode - hopefully it looks good too.

I notice the RAND book was predated by a 1927 book by Tippett et all of Cambridge (UK) who published Random Sampling Numbers for use, I think, by statisticians, or experimentalists. It was widely used, and also analysed several times for goodness (example here). We read in another analysis:

Tippett formed his numbers by taking 41,600 digits at random from Census Reports and combining them by fours to give 10,400 numbers.

Presumably Tippett was clever enough not to use digits which are inherently non-uniform!

ERNIE 1 is quite interesting design-wise, a mixture of yet another rack and a designed product. (The stacks of exposed but architectonically arranged boards are also reminiscent of Eliot Noyes’ original design ideas for IBM, who thought of the internal components as a natural source of computer aesthetics and wanted to expose them behind glass.)
It might be close to what a brutalist computer design might look like. (Mind that brutalism was conceived in the UK about that time.) Also mind the switch board, which features both plug arrays and exposed electronic components.