I sat down to browse the PDP-11 Processor Handbook for the 04/34/45/55/60 this afternoon, and I’m struck again by how small and elegant the system is. Everything you need to know to write an operating system (excepting some info about disk controllers and drives, maybe) for an entire family of processors in about 300 pages of trade paperback. 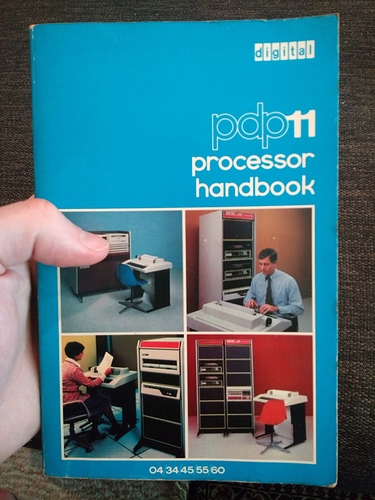 I was also surprised to find errors on two facing pages; on the left, here, the autodecrement example is for INCB, but the memory trace seems to be for INC. On the right, the index mode instruction encoding shows octal 2000 instead of 200. I have read a different copy of this book in the past and didn’t notice that, now I want to compare dates and errors! 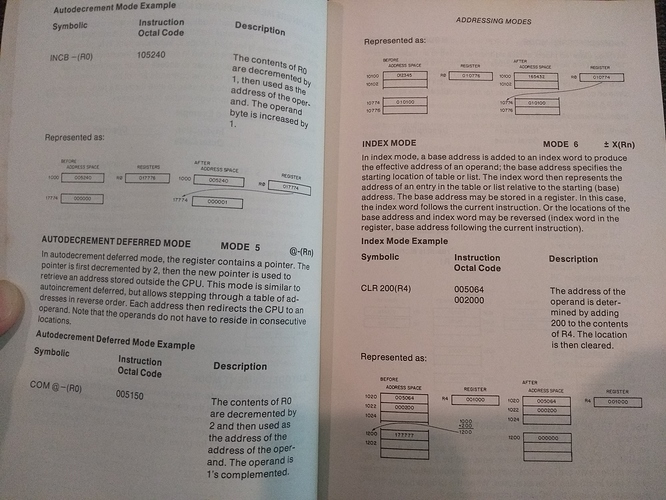 Even so, this book is relatively well-written and a joy to read. It kind of makes one want to write some bare metal midsize -11 code…

It indeed does not display either error! It uses INC in its autodecrement example and the trace matches, and the encoding for 000200 is correct in the index mode example.

Of course, you need another 10.5" for an RL hard disk or RX dual floppy disk, which would have been the common drives for that CPU. Plus a serial terminal – probably a DECWriter or a VT52 if you bought DEC, or maybe a Tek 4012 if you bought third-party, in 1978.

And it doesn’t even need three phase!

Just looking at the book covers here. Never have touched a 11. Have seen a few PDP-8’s and IBM-1130 before the PC’s came out. At one time I wanted a H-11 from heathkit but they discontinued it before I got funds for one. DEC never had a ‘personal computer’ for sale.

DEC never had a ‘personal computer’ for sale.

DEC came out with the DEC Professional in the early 80’s, it was a “PDP in a PC form factor”, essentially.

In the late 70s was the Terak computer, not by DEC, but it was an LSI-11 system.

The machines never really made it to the consumer market not just because of their cost, but just their heritage. Save for something like RT-11 (not the friendliest of systems by any stretch), most of the system software and application software was for multi-user installations and didn’t readily scale down single user computers. Competing against the likes of Wordstar and Visicalc were no mean feat at the time, especially when they didn’t run on your hardware.

I knew a guy, early to mid-80’s. He had his own VAX 11/750. Heck, our office at work only had a 11/730. He leased the machine and had it installed at his house. He was writing custom commodity analysis and trading software on it.

In the Soviet Union you could buy a PDP-11 compatible home computer.

I have an Elektronika BK 0010.01 awaiting import. I’d really like to find a DVK and figure out how to get it here. :-\ (I’m in the US, reliably transporting things from Russia is hard and often expensive.)

DEC came out with the DEC Professional in the early 80’s, it was a “PDP in a PC form factor”, essentially.

I buy all my tubes from there, hi fi still sounds best that way.Good luck with the Imports.20 years sooner might
have been better luck for PDP 11’s.Ben.