I’m working on a simple Z80 standalone computer that includes a VGA video output. To keep it simple, I overclocked 20MHz Z80 to VGA’s 25.175MHz, which is one speed grade above 20MHz. While it is not unusual to run one speed grade faster, I like to know in small sample lot how much faster can a Z80 run. So I’ve modified a simple Z80 design that’s producible at 22MHz with fast 25nS RAM so it can run much faster. In this modified design the Z80 is driving a CPLD, RAM, and IDE device in a small 75mm X 50mm 2-layer pc board. The software used to check out the board are:

The slow CF disk turns out to be the bottleneck at higher clock frequency. After replacing the slower compact flash disk with faster disk-on-module, I was able to run 6 out of 6 Z80 to 33MHz. At 35MHz, they are failing zexall test. So out of the lot of Z80, 33MHz is likely the speed limit.
Bill 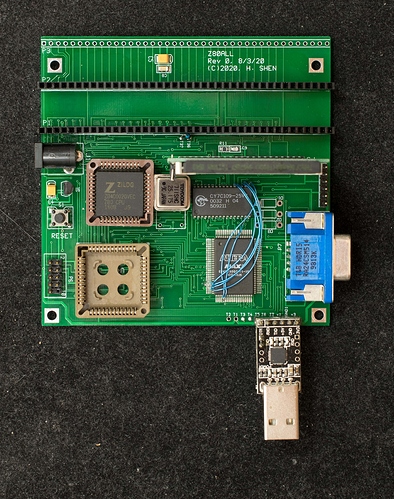