Not exactly a computer: Comptometers

The Comptometer is a mechanical calculation machine. It was invented Dorr E. Felt, and made by the Felt & Tarrant company in Chicago, USA. Felt gave a lecture about the history of mechanical calculators, which was published in 1916, and in it he briefly mentions how he came to make the first prototype of the machine in 1885. Its various models were in production from 1888 to 1961, peaking during the 1930s. (…) 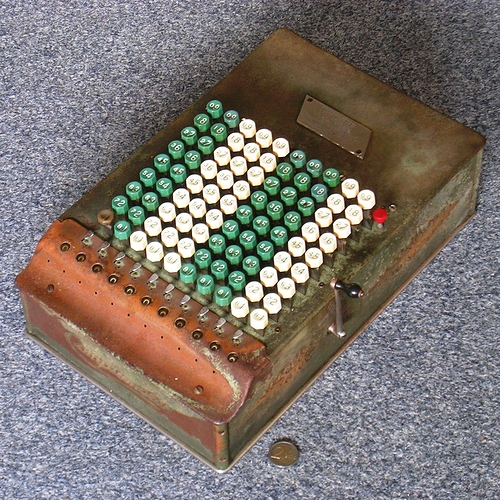 There’s even a nifty simulator (which may qualify for our simulation list): https://www.jaapsch.net/mechcalc/compsim.htm

I had a friend who was an electrical engineer, and I told him what I was going to do, and said : “In ninety days every office in the United States will be doing its calculating by machinery.”

So I went to the grocery and bought a macaroni box to make the frame of. I went to the butcher and bought skewers to make the keys of, and to the hardware store and bought staples, and to the bookstore and bought rubber bands to use for springs. I went to work to make a calculating machine, expecting to have thousands in use in ninety days. I began on Thanksgiving Day, because that was a holiday, and worked that day, and Christmas and New Year’s, but I didn’t get it done in three days. It was a long time before I got it done.

I have a nice comptometer here… It’s a British one, so the “units” go up to 11 - designed for pre decimal pounds, shillings (20 to the pound) and pence (12 to the shilling).

The principle is simple and in skilled hands can be faster than an electronic calculator - at least a modern electronics calculator. Mostly because you enter all digits in a number at once. So to enter 123, you push 1 in column 3, 2 in column 2 and 3 in column 1 (the right most one) at the same time. So one push enters 3 digits.

Adding is simple repetitive entering and multiplying by the shift and add method.

Girls (for that was who were trained to us them back in their day) could go on training courses - sometimes weeks or months to learn how to use them. They would learn tricks - so e.g. to enter a 9 - well if the other numbers are less than about 5, 9 is 4 + 5, so push 4 then 5 in the same column - this can be faster than moving your hand northwards to enter the 9…

Clear - the lever - and this does 2 things as well as clearing - one is to move the digits in the display down by about a 3rd a rotation and the 2nd is to set a latch to ring a bell on the very next key push. This provides a visual and audible indication that you’re starting with a cleared calculator.

They are very simple in their operation, but can be very efficient in the hands of a trained operator.

I’d get some photos of mine (more or less identical to that, but with the pre-decimal key columns) but it’s under a load of other stuff, sort of packed in preparation for a house move…