I was debating this topic with my daughter (age 10), and I found that there wasn’t quite a single concise picture on the “transition” of minis/personal/home computers. So, we made one!

Years ago, I was walking thru the Vatican Museums, and they have this long hall of tapestries - centuries old, and each one told a story. So, I thought “what if a tapestry on the origins of the personal computer were made? what would it look like?” I picked the systems, but my daughter did the arrangement and background. There were numerous other systems I wanted to include, since there is so much more to the story. But to anyone who thinks the PC started in 1981 with the 5150 – well, it’s not that clear cut.

I used to think the “PET” as first (because it was the first “complete system” under $1000). Now the DP2200 from 1970 is a good contender - it’s a “sleeper” because few realize it was programmable. Another “factoid” forgotten is that in 1975 IBM was under some antitrust legal issues (Sherman Act stuff) on bundling capability - the 5100 shows they were perfectly capable of making a personal computer, but they had to be legally careful on how they went about it (their charges ended up being dropped around 1982). The legal history is neat - Datapoint was wrecked since their profit was used to prop up other companies, rather than investing in R&D (edit: a direction chosen after a new owner acquired them; one of the lead founders had died in a car accident); (edited) Jack Tramiel (Chuck Peddle was still an engineer at Commodore) enacted revenge in TI and wrecked TI’s entry into PCs as payback to how TI strong-armed the calculator industry in the early 1970s; or how IMASI bought and ruined the Altair because they were selfish and didn’t want other products being sold next to theirs in the newly emerging computer stores.

“officially” the KINBAK-1 is deemed the first personal computer. And on technical grounds, that’s not wrong – it was under $1000, and could “compute stuff.” But 256-byes isn’t very limited, think only 50 were sold.

The Altair 8800 did have that S-100 bus (the earlier Micral N also had a bus – the Micral could be “expanded”/“upgraded” into a more “complete” system, just like the Altair). But I came across the price sheet of the Altair 8800 - adding the keyboard, over 4K memory, tape system, and the early BASIC, and an async IO card (serial video cards were a thing for awhile) – and you’re quickly at near $5000. At disk drives, and you’re quickly up to $7000 - and it’s not like the stuff you ordered arrived in a week or even a month, there was substantial backorder on all components (most especially memory cards).

Then come the Trinity 1977 - complete systems, closer to $1000 and built-in ROM with enough capability to start doing stuff. But, not very extensive bus systems. (yes, yes, the Apple2 did have a multislot bus - but it had some issues that resulted in some cards having to be in specific slots, so it had some limitations; the PET had IEEE-488 expansion). I’ve seen the 1977-1980 systems best described as “trainer systems” - 64KB, could load BASIC. You could get a taste of things, but they were essentially programmable calculators with CRTs.
EDIT: That is to say, for all design faults, the IBM PC ISA bus did enable that system to remain useful (via expansions) for about 10 years, something the earlier “trainer systems” couldn’t do (being 32/48/64K limited, etc).

I looked at the sales numbers - each of the Trinity (including the Apple2) are only about 50,000 units sold, maybe 100,000 tops. (the early DP2200, Wang, and HP systems were sales around 3000, or certainly under 10k; the IBM 5100/5110 combined were roughly around 30K – these are estimates, but the point is, they were each barely 1-football stadium worth of customers – worldwide).
NOTE: to clarify - the Apple II initially wasn’t that popular or successful, it wasn’t until the later Apple IIe that the appeal started to take off.

So with all that perspective - maybe the 5150 PC “was” the first PC. Except, in 1981 it still had some wrinkles to be ironed out (like the weird 160KB disk format) – which they did, but not until 1983. Both the Apple IIe (enhanced/extended) and IBM PC quickly moved well beyond 100k units. By 1983, the 5150 was over 1m sold, and the Apple IIe soon followed. So that’s another subjective line: first to reach 10k sold? 100k sold? 1m sold? That why I now also agree the Trinity systems were “kind of a first”, but were still a kind of “learner/trainer” for everyone (both the system designers and the retailers).

The best quote I’ve come across is from Project Xanadu, something like “the only reason Microsoft exist is because DEC charged $50k for Unix”. And that’s a very interesting perspective - the vision of the 1970s was the “citizen programmer”, users interacting with the system in a way that suited their needs, not pre-packaged other-peoples-design forced upon all. Except, some kind of workflow consistency was essential to mass adoption.

Anyway, I hope this “mural” can help others to at least start a conversation on how we got to the 1980s PCs.

That is a great poster! It would be interesting to have that in computing museums.

Did you confuse Chuck Peddle and Jack Tramiel in your comment about the fight with TI?

It is not possible to include all interesting machines, but the TI99/4A had a key role in the home computing market in the US with its fight to the death with the Commodore VIC20 and C64.

Since you included the BBC micro, its great rival the Sinclair ZX Spectrum might deserve a mention. In fact, the ZX81 had an effect in the US market that is often forgotten today given its poor direct sales there and the odd Timex partnership. But both Commodore and Texas Instruments spent a lot of money developing “ZX81 killers”: C16 and TI99/2.

My daughter and I have decided to release this to the public domain.

We have a variety of formats suitable for large poster sized printing. Indeed, if a museum does want to do a print, we’re trying to make it easy to do so.

Github currently has a single file limitation of 25MB, so at the github description is a link to her original KRITA file at another file share location. The KRITA format has the original layers she used, which may make it easier for others to make custom versions.

The “discussion link” includes the rationale of what was included (and some rationale on why certain things were not included).

For reference, here is the small preview: 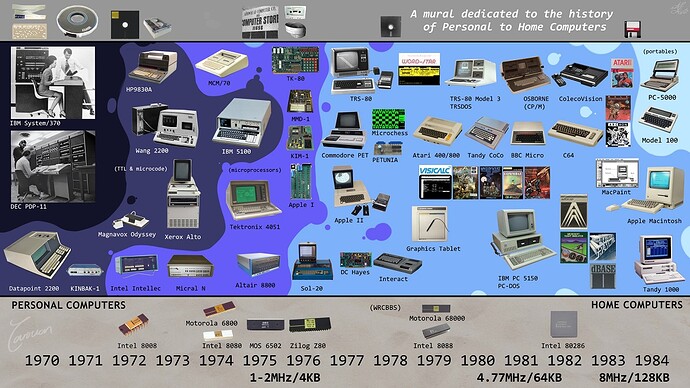 Yes Jack Tramiel is more correct. The price war enacted by the C64 was brutal to TI

It is not possible to include all interesting machines, but the TI99/4A had a key role in the home computing market in the US with its fight to the death with the Commodore VIC20 and C64.

Since you included the BBC micro, its great rival the Sinclair ZX Spectrum might deserve a mention. In fact, the ZX81 had an effect in the US market that is often forgotten today given its poor direct sales there and the odd Timex partnership. But both Commodore and Texas Instruments spent a lot of money developing “ZX81 killers”: C16 and TI99/2.

Thanks for these suggestions. I’ve mulled these over some more…

The TI-99/A could go right where the Graphic Tablet currently is - putting it nicely on its own line, as a unique series of TI-based processors (TMS9900). I’d make the Graphic Tablet a bit smaller and have the TI-99/A next to it, as close within the 1979 column as possible. [ including the Graphic Tablet was important, to emphasize the idea of added-peripherals and the concept of extending these systems via the bus to have capabilities beyond what was originally imagined – the asyc. card and modem being the first example of that capability ]

I remember using a ZX Spectrum at some point (that black case and small keyboard). And agreed, the ZX81 probably deserves an entry. The ZX Spectrum could replace the ColecoVision (the Coleco was sold in the millions initially, but didn’t last till the 1990s like the Sinclair’s). But in trying to stick with “first releases”, I’d go with the ZX80 and have it replace the TRS-80 Model 3 (largely because the Model 3 wasn’t widely sold as a home computer, it was far more practical for Radio Shack stores to offer the Color Computer rather than the bulky Model 3’s). Even though the ZX80 had some NEC-based CPU (and wasn’t particularly popular), it ultimately led to the Z80-based ZX81.

One reason I did want to include the Model 3 was because it showed the inclusion of 5.25" disk drives didn’t start with the IBM PC and DOS. That’s not to say the Model 3 pioneered the 5.25" format (that was really due to one of the 1975 Wang system updates), but the Model 3 was one of the first micros to have them “built into” the case, and not a large external box (and the idea of something “more than boot up BASIC” was needed to organize files and processes, was several years in the making before MS-DOS – DEC wanted $20k for Unix, and Kildall wanted a fair price for CP/M - but Microsoft’s little “QDOS” cost-cut all of that).

Another option is to remove the “software row” (VisiCalc etc) and place those systems around there (but I think it’s important to show how it was “software titles” that ultimately helped make microcomputers successful, as a whole new form of media arose {box software on shelves}, in both productivity and entertainment software {I wanted to have one edutainment title, but I couldn’t find any boxed titles pre-1985 - like Carmen San Diego was 1985; there are some non-boxed titles like typing tutors and such}).

In Brazil a clone of the TRS-80 Model III called CP500 was the most popular TRS-80 of all. Before the arrival of the MSX machines in 1986 it was the only real rival to the Apple II clones. There were the Sinclair clones below, but these were toys. And there were the PC clones above, but they were too expensive for the home.