MUPID, the Mehrzweck Universell Programmierbarer Intelligenter Decoder, was a Z80 machine with 128k RAM from 1982, to plug into a domestic TV and act as a BTX terminal. (Developed for the Austrian Post Office by a Hermann Maurer and a Rheinhard Posch it might after all be named after them.) 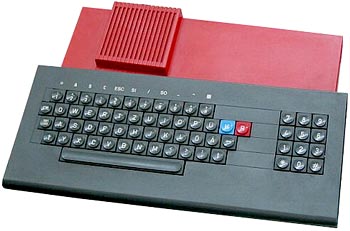 In contrast to other Btx terminals , it could also be used as an independent home computer . An external modem was connected to the television set via the Cenelec interface for the connection to the Btx control center.

Anyone seen one of these? Or another smart terminal of this sort?

via Thomas Fuchs on mastodon

Coincidentally, the date of this posts, October 26, also marks the Austrian national holiday. – I was thinking about a suitable post, but couldn’t think of any notable Austrian home computer. So, well done!

It should be mentioned that the MUPID wasn’t a great success. This could be due to the general failure of BTX (opposed to a widely adoption of Teletext which had inspired high hopes for BTX in Germany and Austria), due to its lack of mass storage, or that Austria wasn’t much of a Z80 territory (with the notable exception of the Amstrad CPC in its German Schneider branding, but this was a few years later), or due to a general orientation towards US manufactured computers and a general mistrust in domestic products (if I recall this right, the system was distributed by the national post office, which probably didn’t contribute to a flashing, innovative image of the device).

Regarding the failure of BTX, it should be emphasized how much this contributed to the early European laissez-faire attitude towards the Internet and especially the WWW. BTX had been a very well planned system, accompanied by a quite extensive roll-out phase with quite an involvement by scholars from various adjacent academic fields. Despite its potential – think of Teletext + Minitel + digital telephony (ISDN) + home computing – BTX never enjoyed much of an adoption by the industry, nor by users (which wasn’t much helped by the general lack of services). It proved to be a major failed investment, both in terms of economic capital and intellectual capital. As a result, when the WWW became a notable factor, the general attitude was much like, “we won’t expose ourselves again” – a sentence I’ve heard from several scholars. Therefore, especially in the early years of the WWW, there were no studies conducted, no forecasts made, no evaluations of the possible social or economic impact, no funding for any related projects. Instead, in the lack of any domestic scholarly production, the writings of various US evangelists acquired text book status. The rest is history.