Currently, I’m very interested in (early) database systems. Probably the most useful software (next to games, mainly on home computers). Databases on home computers also exists, but a Vic-20 as office computer (like on my recent ads) is only suitable for very small companies. A C64 is acceptable but the real thing are terminals and mainframes or similar with green or amber displays and masks on screen. Like on my recent Nixdorf post. 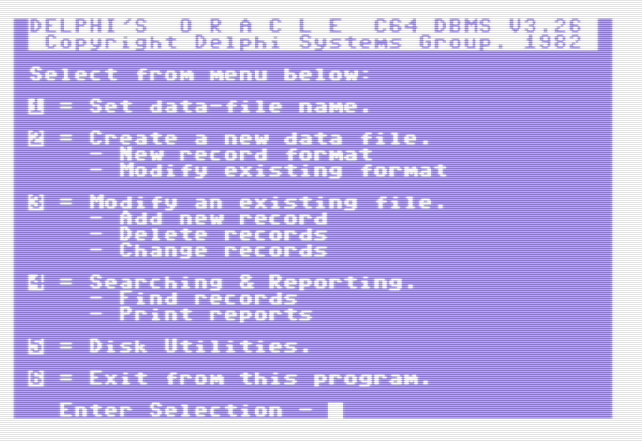 We recently talked about speed and I found this JES2 log, taken from CBT224. A mainframe, probably IBM, took 3.62 minutes in 1994 for reading 78 punch cards and printing 20,678 records (on real hardware). To me it’s sort of slow. (Tape involved. Is printing here maybe writing to tape?)

There is also a sample database and sources like on CBT923 on CBTTAPE (SQLITE for z/OS Unix) . Most is only useful for Hercules users. Although there are PDF and even some few Windows software (inside the zipped XMIT files).

I also like books (mainly physical books). Many interesting books are online, especially on bitsavers. For IBM: DB2 and IMS (Information Management System). The introduction of the latter one has many good illustrations 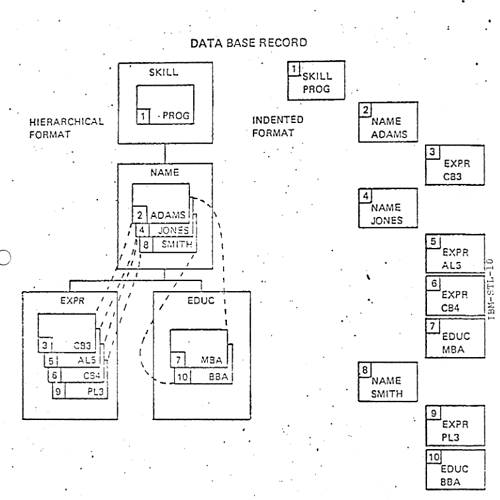 This is utter speculation on my part (so “salt shakers at the ready”), but it would seem that the mysterious 3.62 minutes can hardly be explained by the number of cards read or lines printed. Maybe an unoptimized SQL query was involved, say, without the benefit of a useful index, thus resulting in a “full table scan.” In 1994 computers were not that slow, so database I/O would be my SWAG. We’ll probably never know…

There are 5 seconds between “job started” and “database has been opened” – there may have been some slow connection involved.
The total CPU time is just 11 seconds (“TOTAL TCB CPU TIME= .11 TOTAL ELAPSED TIME= 3.6”), the rest of the 3:6 minutes must have been passed in wait cycles.
(Or, maybe, the system had been interrupted by some priority task?)

Sorry, this log is from a test run of a tape management system with “every option it is capable of”.
The software itself is on another tape (CBT 223).
There’s a 2nd log which is faster (but still quite slow) but has much fewer cards.
3 cards
79 records printed
0.16 minutes (=10 seconds)

So, printing a record is writing to tape? One can imagine that might take time, especially if it’s not streaming - extra-especially if the tape needs to keep backing up before appending the next record.

I see the output buffer is only 2k, so the 20k records are going to have to get written.

I still don’t know if printing means printing or writing to tape. But the tape is of course used (including scratching).
The log is much longer and I haven’t checked the other tape. Probably there’s a documentation.

There are at least 15 tapes involved.

I think there was a time when print jobs would be written to tape, to be printed off from tape to printer without using a computer, or more likely using a smaller cheaper one. Fast computers are too expensive to wait for printers!

I now have checked the other tape with the software.
It’s called ITMS (TMS stands for Tape Management System, “I” maybe for IBM).
It’s in fact a database and keeps track of typically 2000 tapes.
All tape activity is logged.
The documentation is short, but there are documented (long) sources in ASM.
Printing probably means to it’s database (what is probably a tape as well). One internal function is called ITMPRINT.
Reports are also printed. All printing is to SYSOUT, but not sure which device that is.
Printing 20k records to a printer for a test would not make much sense anyway.

From what little I have information I have gatherd (IBM 1960’s) had the I/O channels
manage the hard drive’s data base on disk buffering and packing records and indexes
as needed. Disk drives were really slow back then, so random access took a long time.
for a ball park I guess 1/10 of second per record.I suspect serial
access of records was used for most database functions. I/O devices barely had the size needed for bigger databases.
Ben.