From the days when Intel struggled to decide how to market the microprocessor and whether to make products around it.

Some time ago, there was an Intel 4004-based singleboard computer for sale on ebay. The name of this computer was printed on the board: “Intel 4004 μ-Computer”. I did not buy it (also b… 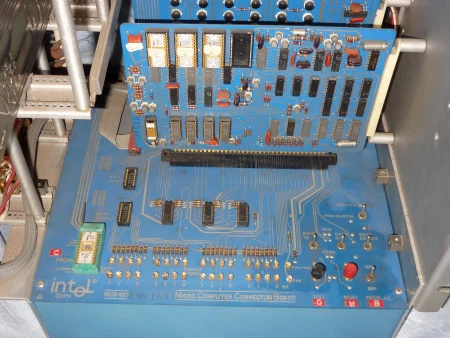 Now, if you looked at the first picture and wondered where it said “mu-Computer”, well it doesn’t, it says “SIM4-01”. This is the (slightly) later name for the board. See, the problem was that Intel did feel that it was a component manufacturer, not a producer of computers, and that it should not be perceived (especially by its computer manufacturing customers) as such. Therefore, after some management thinking, this was not the 4004 micro-computer, this was the MCS-4 simulation device (SIM4-01), and you will find it much more often under that latter name. If you are interested in the history of the 4004 mu-Computer and especially the aspect of Intel shying away from being perceived as a computer manufacturer, I can wholeheartedly recommend the excellent article of Zbigniew Stachniak on exactly this topic (see [Stachniak] in the references).

The 4004 interface board that Hoff’s group came up with fit well with the company’s business objectives, which focused firmly on memory sales: the board could help the sales of both the Eproms and the ROMs.

As I recall, there was another big fight within Intel when they decided to go all-in on microprocessors and ditch the memory business. (Inmos too struggled, the transputer business being the dog wagged by the tail of their memory business.)