"Grace Hopper left a faculty position at Vassar to join the Navy in 1943, and was assigned to work on the “Mark I Electromechanical Computing Machine.” It was 51 feet long, 8 feet high, and 8 feet deep.

“Whether or not Hopper coined the term “computer bug” is a source of some controversy. The Navy promotes the idea that it was Hopper that squashed the first computer bug; there is an actual photo of the offending insect on Hopper’s US Navy webpage:” 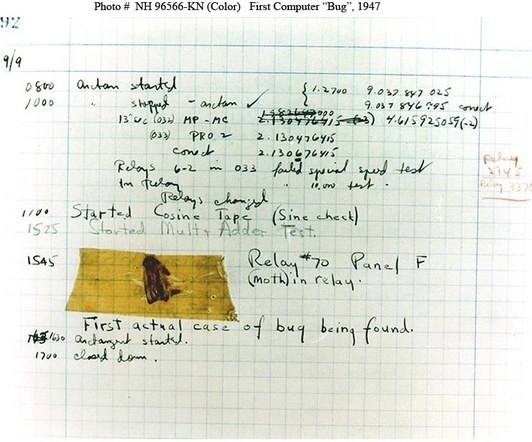 Ellen Ullman about bugs:
“Debugging: what an odd word. As if “bugging” were the job of putting in bugs, and debugging the task of removing them. But no. The job of putting in bugs is called programming. A programmer writes some code and inevitably makes the mistakes that result in the malfunctions called bugs. Then, for some period of time, normally longer than the time it takes to design and write the code in the first place, the programmer tries to remove the mistakes.”
― Ellen Ullman, The Bug

In my 30+ years as a professional software developer, I’ve worked with too many “programmers” who’ve “bugged” the software.

I saw a quote recently something like “programming without a specification is like opening a text editor and typing in bugs.” But I couldn’t find it again. While searching, one of the suggested queries was “do programmers have feelings.”

And bugs?
Bugs have feelings?

As a person who enjoys taking photos of insects (or colloquially, “bugs”), it bugs me that bugs became ‘software error’.

But I’ll probably say the same thing about how ‘spam’ got associated with ‘unsolicited email’.

Regarding origins of the word “bug”:

In 1878 it appears twice in letters by Thomas Edison. Once in a letter to Western Union President William Orton:

“You were partly correct, I did find a ‘bug’ in my apparatus, but it was not in the telephone proper. It was of the genus ‘callbellum.’ The insect appears to find conditions for its existence in all call apparatus of telephones.”

And in a letter to Theodore Puskas:

“This thing gives out and then that. ‘Bug’—as such little faults and difficulties are called—show themselves, and months of anxious watching, study, and labor are requisite before commercial success—or failure—is certainly reached.”

(Apparently, Edison began using the word “bug” in the 1870s and was soon using it frequently. And, regarding the phrase “fixing a bug”, a British reporter wrote in 1889, “Mr. Edison…had been up the two previous nights working on fixing ‘a bug’ in his phonograph.”)

However, to me neither of the two letters look like they were introducing a new term. Rather, Edison is playing with the concept for effect, hinting at this having been an established term which Edison happened to like. (Mind the prominent position, once making the opening of a letter, once as the ending – see the images below. – In the letter to W. Orton, Edison is clearly trying to make a good impression, overall rather formal, but playful, and using his best longhand writing. However, if the term “bug” was new to you and just introduced here, the impression produced would be more the one of a madman. I doubt that Edison would have risked this in what was an important connection to him. If anything, it’s more like Orton had introduced the term to Edison, who is picking it up, just like he is picking up past conversations elsewhere, e.g. where he is assuring the absence of any mathematicians’ desks. )
I’ve read somewhere that “bug” had been a well used term in British engineering communities (no source for this). 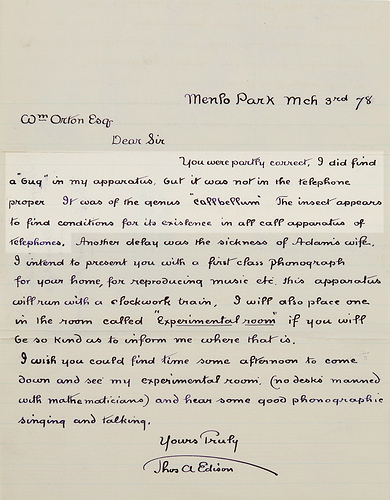 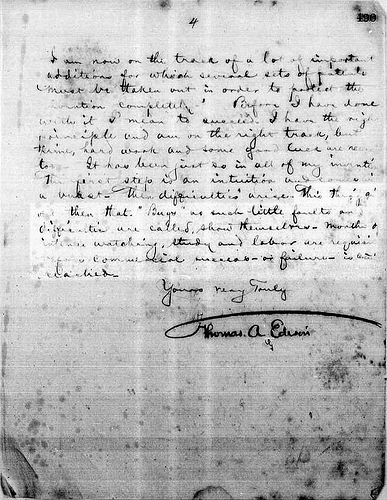 My spell checker wants to know whether we’re discussing etymology or entomology. (Don’t anthropomorphise computers, they find it irritating.)

Off topic, but I love this joke:

I saw a quote recently something like “programming without a specification is like opening a text editor and typing in bugs.”

On a related note, one of my advisors (Doug Comer, https://www.cs.purdue.edu/homes/dec/) once said to me something to the effect of “if you write a loop, and you don’t know its invariant, your loop is wrong”. That has always stuck with me as truly excellent advice.

My spell checker wants to know whether we’re discussing etymology or entomology. (Don’t anthropomorphise computers, they find it irritating.)

This was one of my first thoughts on the topic: a Google search for “bug etymology” would be rather hopeless.