“Programming is the art of algorithm design and the craft of debugging errant code.”
Ellen Ullman:
(From Twitter:)

"Programming is the art of algorithm design and the craft of debugging errant code." - Ellen Ullman

Ellen Ullman is an American computer programmer and author. She has written novels as well as articles for various publications, including Harper's Magazine, Wired, The New York Times and Salon. She owned a consulting firm and worked as technology commentator for NPR's All Things Considered. Her essays and novels analyze the human side of the world of computer programming. Her breakthrough book was non-fiction: Close to the Machine: Technophilia and its Discontents. Ullman's adoptive father'...

Women Who Inspire Us
Software:
http://www.girlgeeks.org/innergeek/inspiringwomen/ullman.shtml

Bugged out
“The Bug” author Ellen Ullman talks about the Gothic terrors that lurk between the rational lines of computer code:

"The Bug" author Ellen Ullman talks about the Gothic terrors that lurk between the rational lines of computer code. 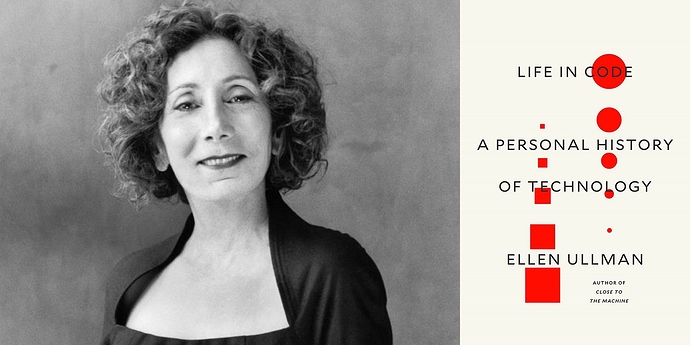 I like the idea of Gothic for stories of life with computers - we build intricate systems and they horrify us. The new prometheus.

The Salon piece was an interesting read. “She does full justice to the highs and lows of the programming life – as both an unnatural punishment for the human organism and an invigorating challenge to the human brain.”

"The messiness cannot go into the program; it piles up around the programmer." - Ellen Ullman
Maurici_Carbo September 17, 2019, 3:26pm #4

35 quotes from Ellen Ullman: 'The corollary of constant change is ignorance. This is not often talked about: we computer experts barely know what we're doing. We're good at fussing and figuring out. We function well in a sea of unknowns. Our...