Nearby @cjs showed a photo of an “FM-7” manual, in Japanese, and that intrigued me. It turns out the FM-7 is a 6809 based machine with expansion capability, including a Z80 plugin expansion.

In fact there seem to be a pair of 6809, one to run the graphics and the other for the application. And the Z80 plugin allows CP/M programs to run, using the main 64k RAM. See old-computers on the FM-7:

The FM-7 was conceived as a cut-down version of the FM-8, eliminating the bubble cassette feature, and thereby achieving greater compactness and significantly lower price. But it also offered features not found on the FM-8, like a real sound synthesizer LSI providing 3 voices and 8 octaves. This made it the ideal hobby Japanese computer at the time.

See this wiki too:

The FM-7 (short for Fujitsu Micro-7) is a home computer created by Fujitsu, first released in 1982 and only sold in Japan. This model competed primarily with the NEC PC-8801 and Sharp X1 series of computers in the early 1980s. It was succeeded by the...

Yeah, the original FM-7, released in 1982, was a fantastic computer: the brilliant 6809 CPU, a full 64K of RAM, decent keyboard and graphics, and reasonable chiptune sound (an FM synthesis card was also available, though it seems rare). And yeah, Fujitsu wasn’t particularly cost conscious: they added a second 6809 with its own RAM for graphics and keyboard I/O. It wasn’t even as cheap as an Apple II+, much less a Commodore 64. But as well as the usual MS-BASIC with DOS commands grafted on to it, it could run full multi-user, multi-tasking OSs like OS-9.

It, with the NEC PC-8001 and the Sharp X1 series, were referred to as the パソコン御三家 (pasokon gosanke), more or less the early '80s equivalent of the 1977 trinity in the U.S. (and perhaps Europe). And they were huge; while the Pet, Apple II and TRS-80 all existed over here, they were very niche computers; Japan had its own scene. While I have a TRS-80 Model I, a C64 and an Apple IIc, these took quite some time to find and were not as cheap as my Japanese 8-bitters. (I have what seems to have become a moderately-sized collection of the latter; I should take one out every week or two and do a little post on it.)

I’ve not had a chance to poke very extensively at the FM-7 series units I own, but what little I’ve done I’ve greatly enjoyed, and I’m looking forward to writing some 6809 code once I get some of my 6502 projects done.

The Japanese Wikipeida page on the FM-7 is, unsurprisingly, about ten times as detailed as anything available in English, but Google Translate doesn’t do too bad a job on it.

Oh, and the FM-7 was quite as packed full of chips as you might imagine from the description above. A while back I showed a bit of an FM-NEW7 motherboard in this post, but here’s the whole thing: 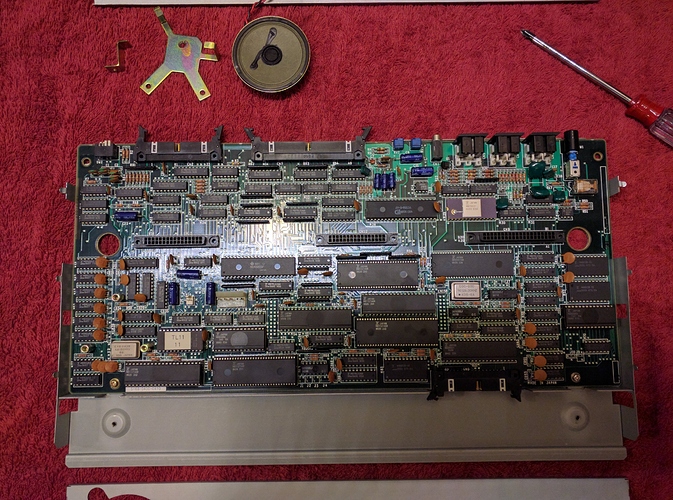 The FM-NEW7 is functionally the same as the FM-7 but uses some custom LSI to reduce the chip count (and, presumably, cost) by about 30-40%. Here’s the original, full chip count version: 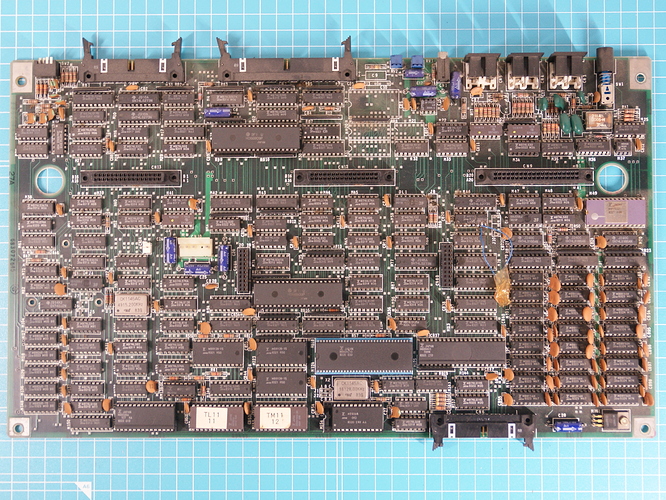 (That’s from this blog post about a disassembly, which has many more pictures.)

This I call a well packed board… Amazing how they managed to keep that “avenue” around the connectors clean.

PS: What was it about this video feed-through with the graphics overlaid? I mean, it’s nice to have, but this wasn’t sufficient reason for any of the western manufacturers to add this feature to any of their products. In Japan, on the other hand, this appears to have been close to a market requirement.

video feed-through with the graphics overlaid

Sounds like wanting to have the device used for TV production? The Beeb was specced to be broadcastable, but needs minor mods for a genlock. The Amiga was genlockable, famously, but I don’t know quite what you need to add to use it.

Actually, if you can overlay graphics with a video feed, you can build games that use a VCR for a background…

Sounds like wanting to have the device used for TV production?

As I understand it, these computers, like the Sharp X1, etc, didn’t feature genlock, it was ‘merely’ feed through with the computer output as an alpha overlay. Probably of use for adding titles to home videos (provided you had at least a video player and a recorder), but not for a more serious video production. Also, these were dedicated consumer products. (E.g., in the Sharp line-up, if it was about productivity, there was the MZ series.) To me, it appeared to be more about consuming two video sources, TV and the computer (e.g., games), at the same time on a single screen. Or was sophisticated home video production that broadly spread and popular? (I really do know nothing about how this was used, which is why I was asking in the first place.

The idea about backgrounds from a VCR sounds reasonable, much like the video disk arcade games, but I haven’t heard of an example for this yet. But then, domestic Japanese video games are, like much of Japan, quite a mystery to the uninitiated… (Maybe it was really about video disks to be coupled by some control line, but not much became of this? I believe, Techmoan has a YouTube video on a more or less experimental Japanese video disk system and a promotional presentation, which featured this kind of setup. However, I think this was only after those computers were introduced.)

Looks like a later machine, at least, was used for video production:

The FM-7/77 line continued to be produced and enhanced through the late 1980s, with the last model, the FM77AV40SX, introduced in November 1988. By that time, the FM-77’s graphics ability had made it a platform for video digitization as well as being able to superimpose graphics on television signals, which made it popular for creating titles in video production.

What was it about this video feed-through with the graphics overlaid? I mean, it’s nice to have, but this wasn’t sufficient reason for any of the western manufacturers to add this feature to any of their products.

Except that they did. “Amiga.”

In Japan, on the other hand, this appears to have been close to a market requirement.

Not really, at least not in the mid-80s, where I think this may have been a feature unique to Fujitsu. It first appeared, as far as I know, as an option for the FM77AV, released in 1985. (It became a standard component only with the end-of-the-line FM77AV40SX in 1988.) The PC-8001 and PC-8801 never had such a facility, as far as I can tell. (The closest thing I can find would be the PC-8801-17 “Video Art Board,” but that appears to have simply increased the number of colours available with standard graphics.1 2)

As I understand it, these computers, like the Sharp X1, etc, didn’t feature genlock, it was ‘merely’ feed through with the computer output as an alpha overlay.

Well, I’m not expert on this, but my impression is that genlock or something similar is required for frame synchronization, which in turn is required for effects like placing computer graphics on top of a television image. I do seem to recall seeing somewhere that video titling was a common application.

Mind that the Sharp X1 is a completely other generation than the Amiga (Z80 A, released 1982). Right out of the box, it provided image overlay (which could probably done in analog as well), but also video text display in tandem with a special monitor (X1 TV). Genlock was available, but only with an add-on board for video capture.
Compare https://www.old-computers.com/museum/computer.asp?c=313

(Personal note: I once was much impressed by the Sharp X1 and its design, when I learned about it, and would have loved to have one, to accompany my somewhat orphaned my MZ-80.)

As I understand it, the FM-7 was about the same specs regarding video processing – and as it also appeared in the same year as the X1, the parallels in this regard are somewhat interesting. Or, if this feature appeared on the FM-7 only with later models, it may have been copied from the X1, where it must have been perceived as a somewhat significant advantage. (The old-computers entry on the X1 mentions that the multimedia capabilities were hardly noticed by consumers. So what was it all about?)

Mind that the Sharp X1 is a completely other generation than the Amiga (Z80 A, released 1982).

Keep in mind that these are all a long series of machines, from ones with little more than basic (albeit good for the time) graphics and cassette I/O in 1982 to machines with more than half a megabyte of RAM, 3.5" 800K floppies and video processing in 1988. Unlike the western computers such as the Apple or C64, which might produce a half dozen models in a line over the course of more than a decade, the Japanese manufacturers produced a dozen or more models in less than eight years. (I count eighteen or so in six years on the Sharp X1 Wikipedia page.)

The FM-7 (1982) itself never had video processing; that came with an option board for the FM77AV (1985). I see now that the X1 series got video processing with the X1G and X1turboZ in 1986. So I guess it was just NEC that missed out on that. But that didn’t keep NEC from holding by far the largest share of the home market from the early '80s to the early '90s.