There was for a long time a Pegasus on display in London’s Science Museum, and it used to be demonstrated regularly by volunteers, until there was a small contained fire, and a subsequent discovery of asbestos (IIRC).

Volunteer Chris Burton reflects on helping maintain and run Pegasus, one of the oldest computers in the world.

The hands-on tour around the major components and building blocks is rather surprising.

(I just imagined what a similar tour would be nowadays: “This is the iPhone under a microscope. This is the baseband processor, which is ultimately running the telephone, and even we do not know what it exactly does. This is the A11 processor. It is 30 years old home computer technology and has been refined to a point at which it rivals the off-springs of a 1969 terminal running at 15 times its power consumption. It is running the operating system, but you are not allowed to interact with it other than by the means a specific app provides. This is the huge flash storage matrix, and, again, you are not allowed to access it. It will be filled with applications coming from our AppStore and media coming from our content programs. Your own data, like photos taken with our bright dual-lense camera, are best kept at our remote servers, which we like to call the cloud, but with a vowel in front. …”

It’s one good thing about retrocomputing, I think, that many machines we might have are visible and understandable. If I bring a Beeb or a Compukit into a show-and-tell, I can identify processor, memory, and peripherals, and give some idea as to which bit does what. I can show how the circuit board allows for various RAM capacities and various ROMs. I could in principle change a ROM to show how it changes the personality of the machine.

Besides, the film made me wonder what audiences it was targeting. For 1955, it presupposes quite some knowledge about computer components, but it is also showing these components in a rather unusual matter-of-fact way and in detail, what they do look like (even inside) and how they contribute to the abilities of the machine. It’s clearly not intended for a general public, probably not for the management from potential customers, not for the own staff, – it’s quite an enigma.

It’s one good thing about retrocomputing, I think, that many machines we might have are visible and understandable.

Yes! This is precisely why I keep mechanical calculators in my office to show students. You can see the registers turn.

I had a PDP-11/34A CPU in my office last semester, and I showed it to several students. One of them looked at it, his eyes got huge, and he said “wait, you can build a CPU?” I suggested that he take a peek at Ben Eater’s 8-bit breadboard computer, if the thought that kind of CPU looked interesting. He sent me an email the next day, saying he was going to build one over summer break.

To bring it full circle, he brought it to my office for some debugging today: 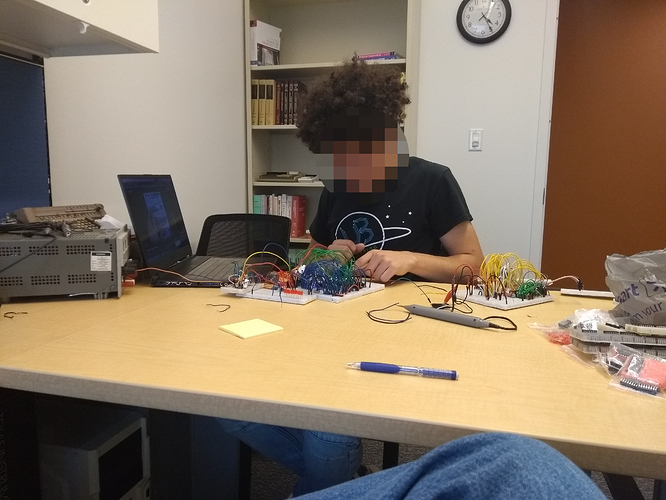 (As a bonus, you can see an HP 97, a TI 2550, a mechanical calculator, some nice vintage programming books, and a Power Mac G5 in this photo!)

Great idea to get building! So much better than watching it on YouTube, or reading about it.

BTW, for anyone who likes CPUs, take a look at the anycpu forums.

(I do hope you’ll favour us with a shelfie from your office @elb … I see a few titles I recognise.)