Electronika - putting PDP-11 on your desk and in your hand

With the cloned LSI-11 chip, the К1801ВМ1 and family, the Soviet brand Electonica produced an all-in-keyboard home computer in 1984:

The Electronika BK is a series of 16-bit PDP-11-compatible Soviet home computers developed under the Electronika brand by NPO Scientific Center, the leading Soviet microcomputer design team at the time. It was also the predecessor of the more powerful UKNC and DVK micros. First released in 1984 (developed in 1983), they are based on the К1801ВМ1 (Soviet LSI-11-compatible CPU) and were the only "official" Soviet home computer design in mass production. They sold for about 600–650 rubles. This was...


See also this technical info site which says it was quite expensive at the price and also very slow:
http://oldcomputermuseum.com/elektronika_mk85.html

In normal mode the calculator worked very, very slowly. For example, the calculation of the sine of 3 required whole 3.5 seconds. It was possible to put the calculator in “accelerated mode” by pressing the “+” key. Then the same calculation took “only” 0.5 seconds, but you could see the batteries literally “decay” in front of your eyes, and very soon you had to replace them. 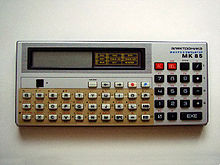 Someone is having fun with these LSI-11 clones over here:
https://hackaday.io/project/67369/logs?sort=oldest

…and someone else is rebuilding these chips in HDL: 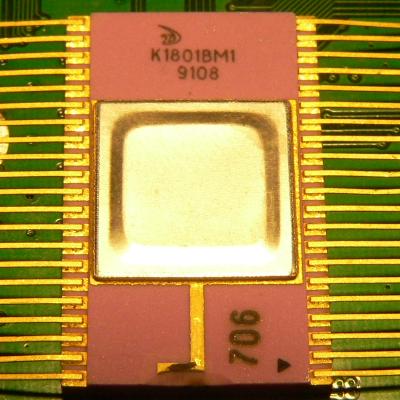 Also mind its bigger brother, the Elektronica MK-90! (Thanks to the big screen, you can play Tetris on this one, well before the Game Boy.) – I really do want one of these.
http://www.rskey.org/mk90

Sidenote: Apparently (I’ve just read this and do not know any specifics) the BASIC implementation on the Elektronica PDP-11 handhelds used BCD arithmetics only and weren’t the fastest for math.

Jamel Tayeb had some beautiful images and even videos on his G+ page, but sadly these didn’t survive the transition to his blog. The texts are still to be found:
https://jameltayeb.com/?s=ЭЛЕКТРОНИКА

Piotr Piatek’s site has some amazingly detailed information on these machines:

The MK-90 feels like an unfinished prototype (both in hardware) with a demo version of software onboard (just an old PDP-11 BASIC from 1970s with a few addition). The MK-85 closely imitates the Casio FX-700P calculator behaviour (both external appereance and the software functionality) so it is a much better device for everyday use.

Having no first hand knowledege of either of these computer, I’ve to admit that I do share some faszination for the MK-90 (more as a concept than the real machine, which I don’t know). The MK-85, in theory, seemed always a bit ironic to me, using a PDP-11 to emulate a Casio pocket computer.
That said, it seems fair and reasonable that the Casio approach was probably the better fit for the form factor.

For the MK-85 they simply picked the CPU which was easily available at acceptable prices (it the USSR).

The MK-85 is way faster than the Casio (with some work you can enter machine code here - see Piotr Piatek’s pages, for example) . The problem is in the BASIC implementation. Still, the BASIC in the MK-90 is even worse…

Still, the BASIC in the MK-90 is even worse…

As I do unterstand it (I don’t rember whare I did pick this up) the BASIC of the MK-90 does BCD math only. Is this correct? Using a backslash for the statement separator (as in DEC BASIC) might be another one. – Are there any other issues of note?

Another issue is that the MK-90 BASIC requires full syntax (like: 10 LET A = 3 ; you cannot omit the LET) which is annoying because the MK-90 keyboard is far from comfortable. I also didn’t find any BASIC command how to save data to the “disk” (this is stupid as there are two 10 kB storage modulles) and even here is nothing like POKE command.