Datapoint 2200: Father of the Personal Computer

That terminal reminded me of the Datapoint 2200. This “terminal” was actually a computer in disguise. The processor was a TTL equivalent of a serial version of the 8008. Intel developed the 8008 under contract to Datapoint, but failed to meet the deadline. The bit-serial TTL version was faster, anyway.
I personally think this “terminal,” which could be and was used as a computer, could lay claim to being the first “personal” computer, although too expensive for most individuals.

There’s some interesting history, and differing accounts, of this pivotal transaction. Here’s Ken Shirriff with one of his highly detailed write-ups:

The first 8-bit microprocessor, the TMX 1795 had the same architecture as the 8008 but was built months before the 8008. Never sold commerci...

Datapoint met with Intel in December 1969, and what happened next depends on whether you listen to Intel or Datapoint.
Nowadays, we think of MOS chips as high-performance and building a CPU out of TTL chips seems slow and backwards. However, in 1970, TTL logic was much faster than MOS. Even operating one bit at a time as a serial computer, the Datapoint 2200 performed considerably faster than the 8008 chip.
A Texas Instruments salesman learned that Intel was building a processor for Datapoint and asked if Texas Instruments could build them one too. Datapoint gave TI the specifications and told them to go ahead.

Some interesting facts: The Datapoint 2200 introduced the common 80 columns format. After their first success with a drop-in replacement for the ASR 33 TeleType (featuring same dimensions and cable connections), Datapoint (then the Control Terminal Corporation) originally planned a similar coup with the 2200 as a drop-in replacement for key punches, hence the 80 columns at 12 lines screen, replicating the punchcard (in the footprint of the IBM Selectric). The screen dimensions stuck, even as the specifations outgrew the initial ideas. (Reportedly, the machine was loved for its low profile. Another selling point of the Datapoint terminals was a keyboard with rollover, suitable for typing.)

Famously, the Intel 8008 is a Datapoint 2200 processor on-a-chip as commissioned by Datapoint to 3 different fabs (Intel, Fairchild and TI). Since the chip didn’t deliver the performance, the contract was canceled with rights remaining at Intel. The rest is history and we’re all running our computations on the direct descendants of this 1970 terminal. Most interestingly, Datapoint managed to stay ahead of microprocessors with their homegrown multiboard processors until the late 1980s or so.

The original design drawing featured a blinkenlights console like row of toggle switches below the screen (presumably advertising the computational capabilities), which was soon dropped: 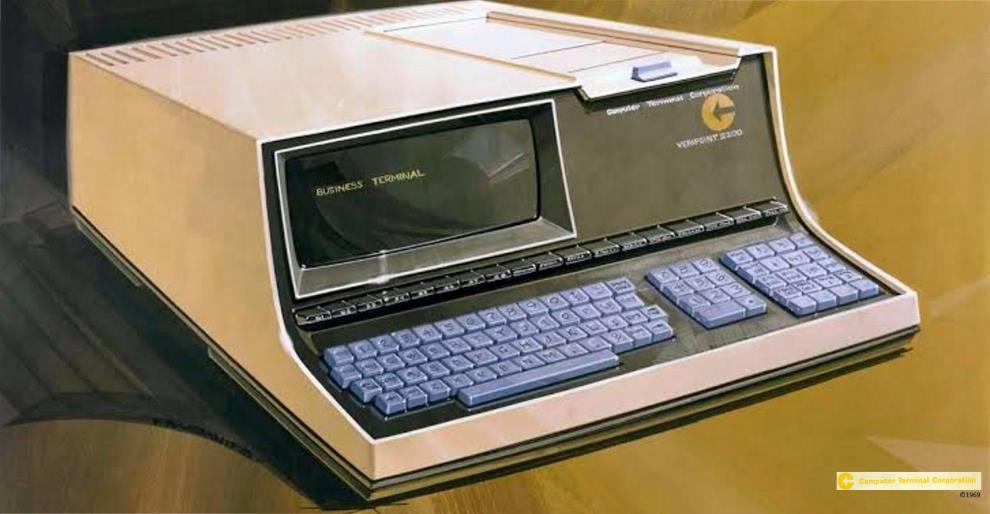 And here’s a video showing the DP 2200 terminal and its internals (sadly, the aspect ratio is distorted when watching this on YouTube, while the embedded version is fine):