A recent Facebook post by The Centre for Computing History featured the DAI Personal Computer. Here’s some info on it from Wikipedia:

The DAI personal computer is a rare, early home computer from the Belgian company Data Applications International . The DAI came to market in 1980. It provided many pioneering features such as high resolution color graphics, a maths co-processor, and a pre-compiling BASIC interpreter. However, it never became a commercial success.
[…]
The DAI was based on a very early 8-bit microprocessor, the Intel 8080 A, a CPU that was more advanced than the prior 8008. It contained on a single printed circuit board all the needed circuitry, some 120 individual ICs. The futuristic-looking white enclosure also held a high quality keyboard, which was uncommon for the time. As a computer display, any TV could be used. The DAI could display text and high resolution color pictures and contained a memory controller that enabled it to use up to 48 kB of DRAM. This memory was divided in three 16 kB regions (memory banks) that could contain either 4K or 16K memory chips. By using memory map switching, a total of 72kB of memory was addressable. The DAI also had five programmable interval 64µ - 16ms interval timers that could generate interrupts. The built-in interrupt handler chip could also handle two external interrupt inputs and the interrupts of two serial RS232 UARTS. The DAI featured a DAI/Indata DCE parallel I/O bus for parallel high speed I/O. The DAI also had 3 sound generators and 1 noise generator, and was capable of generating stereo sound. 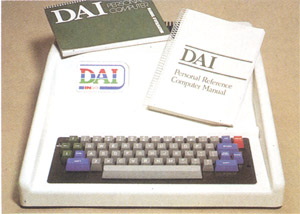 I see you could run Basic 8x faster by fitting floating point hardware (AMD 9511) - and it seems the machine could genlock too.