Fun with a Raspberry Pi, connected to a Midi Keyboard, and controlling SID chips.

Our design engineer Simon has wanted to make his own electronic musical instrument with Raspberry Pi for some time. Finally, meet Synth6581.

The Synth6581 device doesn’t look much like an electronic musical instrument, but just like circuit boards stacked on top of a Raspberry Pi 4. You have to plug a musical keyboard into a USB port and a pair of speakers into the audio jack on the bottom board to make it work.
[…]
By borrowing a few chips from broken Commodore 64s, including one or two lying around Raspberry Pi Towers, I made those 1980s ping noises into a polyphonic synthesiser controlled in Python on Raspberry Pi. The registers in the SID chips are simply being ‘poked’ by Raspberry Pi instead of Commodore 64. I also reverse-engineered the music from old games and made the sound effects and instruments work across the keyboard.

It’s the Synth Tower of Babel!

(Also known as the “SID ziggurat”.) 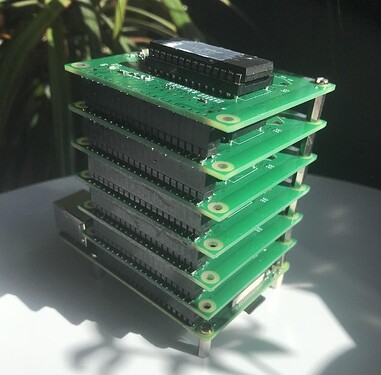