Attached: 1 image Okay, retrocomputing nerds, it's your time to shine. Can you identify any of the equipment in this picture? Probably taken circa 79-80 in northern NJ. #retrocomputing 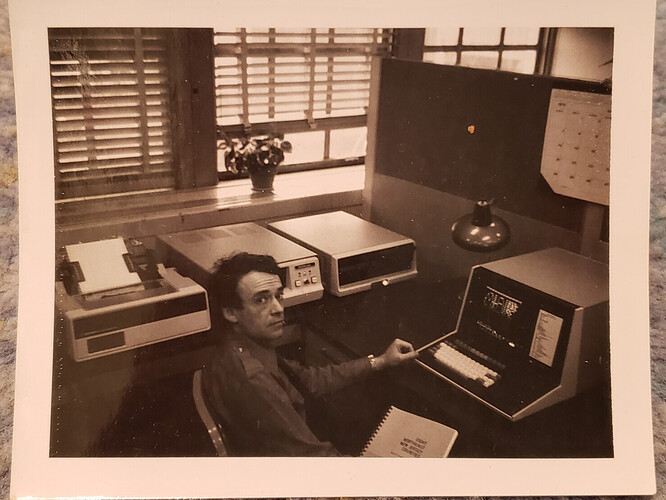 (A commenter suggests VT78 but the keyboard doesn’t match - in fact there seems to me to be no numeric keypad, which might be a big clue.)

Do we think the box next to the printer might be a disk or tape unit? I has a perhaps identifiable arrangement of pushbuttons on the front. It has ventilation slots, unlike the box to the right. (Which therefore probably isn’t a minicomputer - perhaps a modem or serial concentrator??)

I suspect that yes, it is a dual disk or tape unit, based on the set of buttons and indicators. The unit in the corner is obviously a dual 8" floppy drive; the styling of the cabinet bezel looks a little bit DECcish to me, but more in the sense of “wouldn’t it be great if this looked like a PDP-11 CPU” than the actual PDP-11 drives, and I’m not aware of any DEC dual 8" floppy in a cabinet like that. The closest would be the Heathkit H11 drives, but they don’t have that style of bezel.

The terminal (and maybe CPU?) unit is probably the thing to identify; it looks pretty unique. The stylings are more Tek than DEC (Compare the Tek 4012/4014 or 4051/4052) to my eye, but it’s clearly neither one; for one, as you mention, it has no keypad (and the Tek computers would have a tape or disk drive in that space to the right of the display).

Good thinking. Subsequent commentary notes a stylistic similarity with aCodex product, and that a Codex advert shows the printer and floppy drive as seen here. But I haven’t managed to turn up any terminal from Codex other than the cdx-68 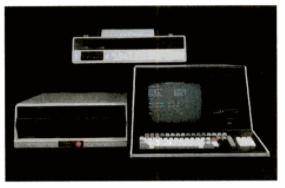 (Codex were acquired by Motorola, possibly their pre-acquisition products were under the radar…)

I scoured image search for Honeywell terminals which I remembered having similar bezel shapes but all of them have the numeric keypad. Maddening.

This just about has to be it, right? I’ll note that the keypad was an optional add-on for a lot of DEC terminals (in particular, the DECwriters); maybe it was for Codex, too?

Interesting mention of the 6800 there, because we’re now told:

from the person in the picture:
“This is an MC6800 development system. I purchased it for Edwards & Kelcey to develop applications on traffic control and route guidance … I automated Garden State Parkway toll booth prototypes among other apps.”

So, maybe a 6800 dev system running in a housing later used for a terminal. Or possibly a cross-dev system targetting the 6800, and the terminal really is a terminal.

Edit: d’oh! I’ve just noticed that cdx-68 is not just an intelligent terminal, but “a modular hardware design permits the CDX-68 to range in configuration from passive display terminals to stand-alone systems… An extensive array of software includes ANSI 74 COBOL, BASIC, FORTRAN, MPL, a macroassembler and the CODOS Disk Operating System.” Coupled with the name, I think we can speculate that the CDX-68 is a 6800-based terminal and also capable of being a development system.