anabrid is a German company that is currently developing an analogue computer. I recently stumbled over their website. I guess it is more for marketing reasons why they announce a simple computer of that kind. It understand it is still in pre-order phase. But maybe it is interesting for one or the other of you…? : - )

Thanks for sharing, that sent me right down a ton of rabbit holes…

Wouldn’t it be marvelous if there were an Arduino inside?

it would be very interesting, but I think the lag in A-D and D-A conversions would be noticeable… (Not hard to do though, but I feel I have enough on my plate right now…)

Many years ago I built an analog computer - there was a design in (I think) Practical Electronics magazine in the UK - The only thing I ever had it do was emulate a lunar lander… Today all those lunar lander programs are just digital stimulations of the analog world. Along with just about everything else we do…

I do wonder what they were really used for “back in the day” before we started to digitise everything - or were they really used for anything? Aeroplane simulation is an oft-quoted use though.

I’ve seen a mechanical tide calculator made with wheels and cogs - not exactly “programmable” though. Does a clock count? And there are orreys, the most notable probably being the Antikythera mechanism - but like others not programmable in a modern sense. A tide-predicting machine was a special-purpose mechanical analog computer of the late 19th and early 20th centuries, constructed and set up to predict the ebb and flow of sea tides and the irregular variations in their heights – which change in mixtures of rhythms, that never (in the aggregate) repeat themselves exactly. Its purpose was to shorten the laborious and error-prone computations of tide-prediction. Such machines usually provided predictions valid from hour to hour and day to day fo Th...

The getting started doc for The Analog Thing is nice, with some background, motivation, and examples. There’s a Lunar Lander setup! But, I think it doesn’t model the (all-important) mass of the fuel - can anyone confirm, and see how to fix it? 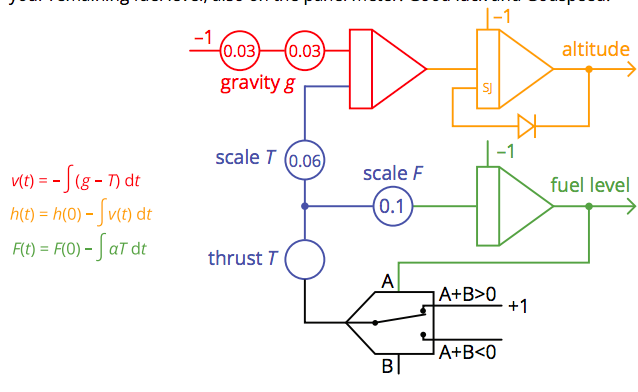 [quote from Drogon]
Many years ago I built an analog computer - there was a design in (I think) Practical Electronics magazine in the UK - The only thing I ever had it do was emulate a lunar lander… Today all those lunar lander programs are just digital stimulations of the analog world. Along with just about everything else we do…[/quote]
Is this the computer that you built? 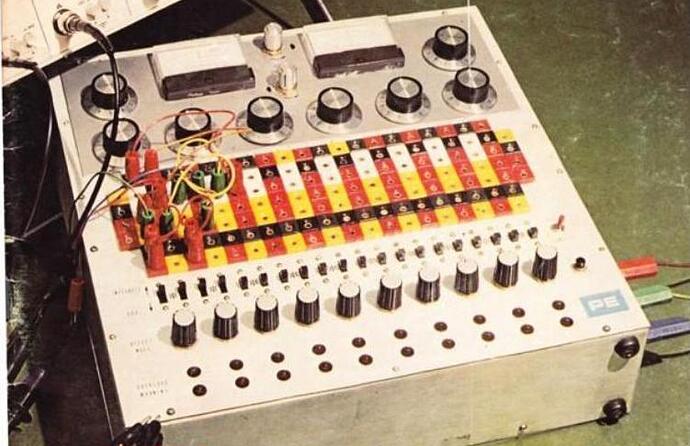 This looks like one of the best analog computer articles that I have ever seen. While I have not read the entire article, the explanations given are great for this, and I look forward to reading the whole thing.

Did you build yours from a kit, or did you make your own boards and build it from scratch?

I’m a bit disappointed that the PDF does not include the fourth article, but I downloaded the entire library from World Radio History (PRACTICAL ELECTRONICS: UK Electronics hobby and construction magazine) and will read up on it later.

Is this the computer that you built?

Ahh… Memories! However that’s not the one. While I do remember that one, seeing it now, I was 15 when that was published and I’m sure it was a much simpler design. It’s also possible my memory is wrong but all I remember was a much smaller plug-board and only one meter and linear pots. I wonder now if it was a dedicated lunar lander game I made and not a general purpose one…

So maybe it wasn’t PE after all, but one of the may other magazines. I’m sure it was on stripboard too as the only PCBs I remember buying then were the very “posh” ones from Elektor…

I’m going to have to make one now though.

I will suppose that the +1 at the bottom right (connected to the “A+B>0” input) comes from a button that the user can turn on (+1) or off (0). In that case this is indeed a good implementation of Lunar Lander but without taking into account the changing mass, as you said.

The simplification is in the v(t) equation which is actually:

where k is a scale factor to convert fuel level to mass.

We would need to replace the constant 0.06 scale for T with a different constant divided by m(t) and that is pretty awkward to do on an analog computer. How bad is the simplification that was made? If we suppose that the scale factor of 0,06 is when the tank is empty and that a full tank has half the dry mass of the lander, then the scale factor for the full tank would be:

At the start of the simulation the engine will do a slightly better job than it should making the game a little easier to play. As the tank gets closer to empty the simulation gets more realistic. I would leave it like that.

Nice analysis! Looks like the Apollo Lunar Lander was two-thirds propellant, by mass, but as you note, tuning the approximation for the final situation isn’t too bad.

Given how thin the LEM walls were, I can’t say a 3:1 full/empty ratio is surprising. So it is twice the number I used, meaning that if the 0.06 scale is for empty then the scale for full would be 0.02 (you get a lot less “bang” for the same engine output).

Initiator and main developer of THAT – The Analog Thing – is Bernd Ulman aka vaxman. Bernd has a huge collection of vintage analog computers at home (http://analogmuseum.org/) and is working with his company anabrid GmbH on combining analog and digital computers for modern workloads.

One of the main design goals for THAT was an affordable analog computer for learning/teaching purpose.

Bernd is also regular speaker on vintage computing events in Germany. Some talks – also about THAT and on his analog computer collection – are recorded and available here: media.ccc.de - Search for "Bernd ulman" Most talks are in German, though.

Oh, and Bernd also wrote several (modern) books on analog computing. Plus one on the AN/FSQ-7 computer, but that’s another story. Most of his books are in English.