Some remarkable photos of the 68030 prototype in this shared folder from CaptainTivo, a commenter on Ken Shirriff’s blog. 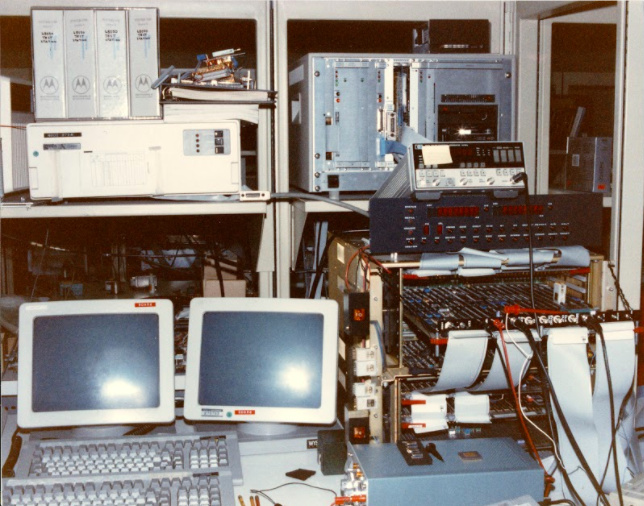 I was in the Motorola 68000 design group from 1985 to 1996. The first project I worked on was the 68030, which was essentially the 68020 with an integrated MMU and virtual memory capability. We did have a full hardware breadboard of the 68020. The 68030 breadboard was 18 24"x24" wirewrap breadboards, each with a 23x14 array of 20 pin DIP sockets! The chips were mostly PALs and RAM/ROM, no bitslice. This was before software logic simulation was a real thing.

Normally I would not have been allowed to take pictures of this, or even bring a camera into the building, but I gave a talk on the 68030 at Stanford in 1986 and I got permission …
I did not work on the emulator (that was the Tiejen brothers), I did design on the TLBs.

The cards were about 24" on a side, with 20 pin wirewrap DIP sockets. Mostly PALs, RAMs and ROMs. Although the 68020 and 68030 have relatively complex instruction set, a lot it was implemented in microcode, so the actual logic is quite as hairy as you might think.

Thanks for a tip-off from ttlworks on 6502.org

Thanks heavens, from the title I thought this was some hobbyist project.