When programmable calculators are insufficiently inspiring, bring in a space-rescue or lunar-lander story to provide motivation: 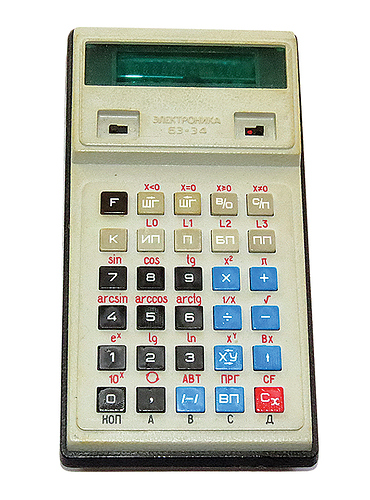 B3-34-programmable600×809 393 KB
Photo: Sergei Frolov/Soviet Digital Electronics Museum (" At a time when few Soviet households had personal computers, programmable calculators like the Elektronika B3-34 took on many roles.")

The Kon-Tiki serial was an instant hit, and the magazine soon became one of the most prominent forums for younger users of programmable calculators. The futuristic narrative of each chapter was combined with puzzles on the physical laws of space travel and tricks for programming the B3-34. But what kept readers reading was the dramatic plot and the novel’s focus on overcoming human and technological limits.

In September 1985, ninth graders all across the USSR began studying a new subject: Basics of Informatics and Computing Technology. The rollout of the compulsory course, which aimed to make programming a universal skill, was to be accompanied by new textbooks in 15 national languages, training for some 100,000 teachers, and a million computers for the 60,000 or so middle schools across the Soviet republics.

In August 1985, the Soviet science magazine Tekhnika Molodezhi began publishing a serialized novel about a pair of explorers trying to fly a lunar lander from the moon to Earth. Each installment included tasks to be worked out on a programmable calculator.

The rollout of the compulsory course, which aimed to make programming a universal skill

I find it quite interesting that the Soviets were making much the same push as we here in the US at about the same time. I suppose they had about as much success as we did.

I quite the current idea here (in the UK) which is to teach “computational thinking” - not programming. I don’t know how well it’s working in practice. What stands out to me about the USSR plan is the training of 100k teachers - it should be obvious that well-trained teachers and a well-designed curriculum should be a win.

See also the nearby thread where Kasparov sets up computer clubs as a response to what he sees on his travels.

It so happens that France too was in on the act, promoting a culture informatique. And they too had an ambitious plan:

Machine translation (how modern we are):

The Computing Plan for All (IPT) was a program of the French government that was supposed to introduce the 11 million students of the country to the computer tool and support the national industry. It followed several programs to introduce computer science in secondary education since 1971. The IPT plan was presented to the press on Friday, January 25, 1985, by Laurent Fabius, Prime Minister of the time. As of the beginning of September, it aimed to set up more than 120,000 machines in 50,000 schools and to provide training for 110,000 teachers by the same deadline. Its cost was estimated at 1.8 billion francs, of which 1.5 billion francs for equipment.

Edit: details found via this 400-page dissertation about the respective initiatives in US, USSR, France.