I posted a couple months ago about this OC8820 I found in my father-in-law’s crawl space. I went back and picked it up last weekend and have started to check it out. I started by disconnecting the power supply and checking that voltages looked normal, and they were. So I plugged it in and did and powered it up and not much happened accept for a beep. I stuck a couple floppy’s in the drives, not formatted for this machine just to see if the drives would start up. This time it attempted to read each drive and switched back and forth between the two. So it seems the computer is running and trying to do something. The monitor didn’t show any signs of life though. Adjusting the brightness did nothing, so looks like I have some work to do there.

Then after a few minutes, I heard a sizzle and a nice plume of smoke came out of the power supply. I disassembled the supply, an Astec AA11730, and saw that one of the film capacitors had popped.

So I’m going to have to get the power supply working again and then tackle the monitor. I also need to order on of those floppy emulator devices so I can try loading some software. Hopefully the drives won’t be too much trouble to get working. Here are a few pics. 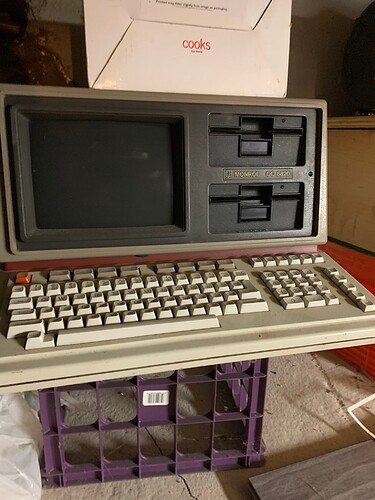 Here a pic of the power supply showing the bad cap. 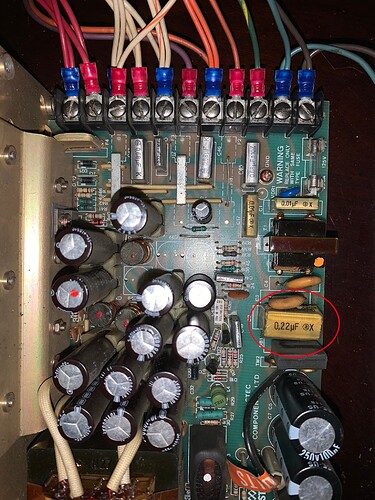 This is the main board which includes the floppy drive controller. 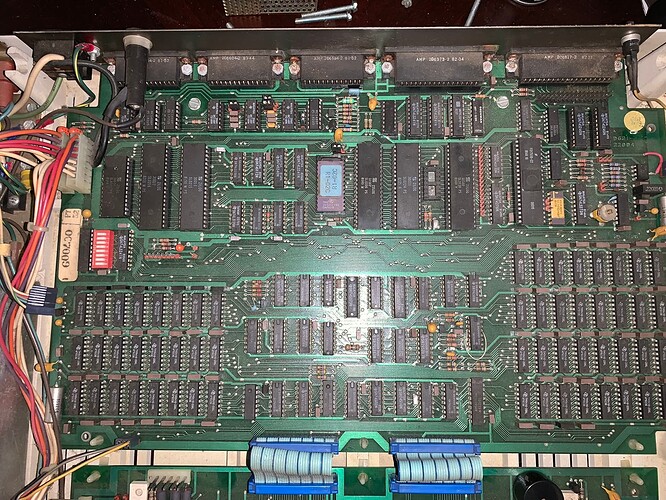 And this is the huge video board. 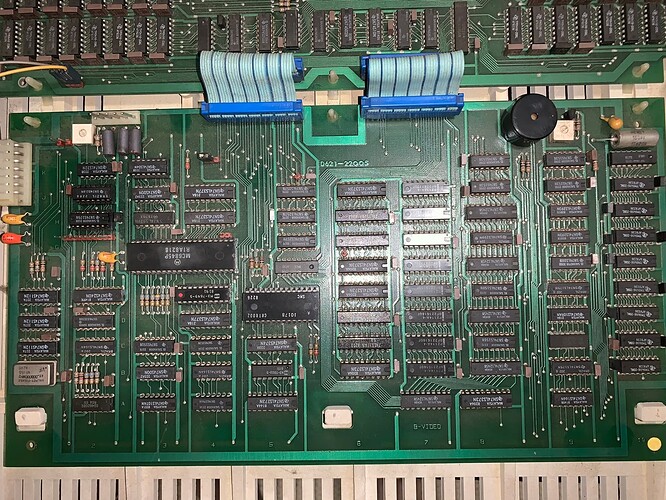 The machine had this tag on the side. Looks like it was used at the Glenview Naval Air Station. Cool! 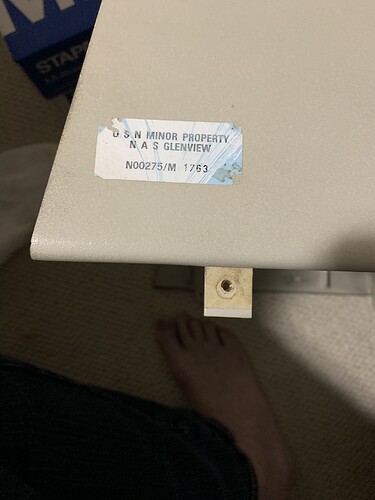 That failed cap looks like a RIFA - in the case of Acorn computers, these are on the mains side and there for interference suppression, so you can in that case use the PSU without fixing them… once you’ve aired the room a bit.

Your right, but I think I’ll just wait till the part comes in and get the supply put back together and hooked up. In the mean time I’ll clean up the inside of the machine and check out the drives.

I’m still working on the repairs of my machine too, if you need help to test something let me know. My power supply and the video are working fine but I need to replace the memory chips and probably some logic ones too.

Looks like there are two more RIFA caps on that board. I’d replace those too while you’re at it.

I got the PS put back together and started it back up, minus the drives. Voltages all look good but still not getting any video. I check the signals from the video board and I’m getting a clean Vsync, but no Hsync or Video signal. When I have more time to mess with it I’ll start probing the board to trace the problem. The fact that I’m getting Vsync means the MC6845P is at least partially functioning, so maybe it’s one of the chips between it and the output to the monitor.

I checked out the drives and they are loaded with dirt. Might be because the cooling fan blows directly into the drives. Geez.

Im also onto repairing a Monroe OC-8820.
Sorry for my bad English but anyway. 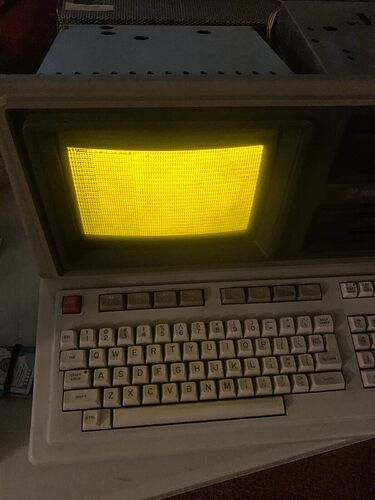 The computer was quite damage when it was shipped to me in Sweden. 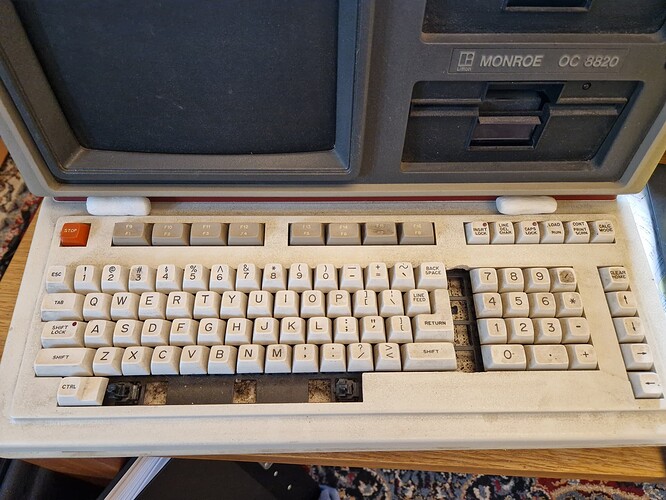 After test both the upper ram 16k and the videoram 4k, both turn out good, and probing around the most possible problem would be the crt8002, so i order a new one and it turned out to be bad.

All ram chip was in a good temperature and all data lines seems to work ok, so more or less i guess it was a bad ram chip not working at all.

So onto biggy packing. 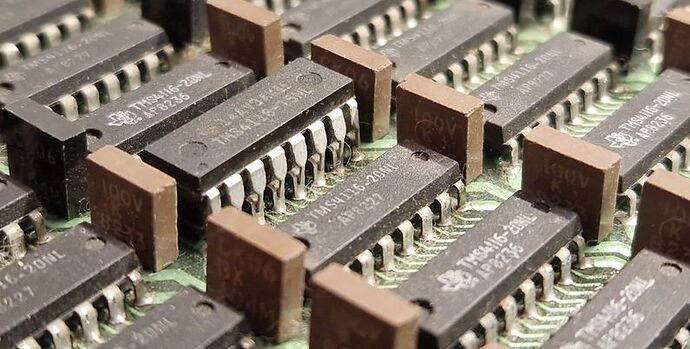 and after just testing 13 4116 i found one bad chip and then it was time to clean up and lubricate the drives.

Both tested in read and write with greaseweazle with good and similar result on both drives.

and as a magic

The power supply has been fixed but the ebay seller did start it before selling it, and I guess he got some good rifa smell in his house…

I have seen in other threads where that aleperez has asked about the design with using adders as memory bank select. The 74LS283, and yes they by design gets very very hot but are still good, but the origin of monroe comes from DIAB in sweden that mainly designed it. They had design a, or more actully, swedish computer before called ABC80 this computer also uses a 74ls283 for memory mapping. Schematic here https://www.abc80.net/old/ver1/luxor/abc80schema/abc80schema_2.gif look at the lower right side for 74s283. From what I have heard was that Monroe visited sweden and did see ABC80 and wanted something simular but better. both ABC80 and other computer have the origin from databoard 4680 as well as monroe have. If you look into the design on Monroe there is many common things with the Swedish computers from DIAB.

I will later this year get hold of the schematics for the Monroe computers and next spring even more software and I will put it online.

I have another machine that runs OS8MT as well

Have a good one

when there is a bad ram 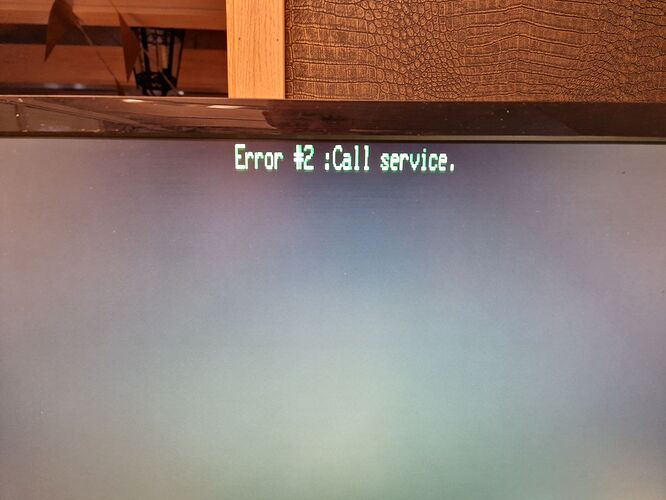 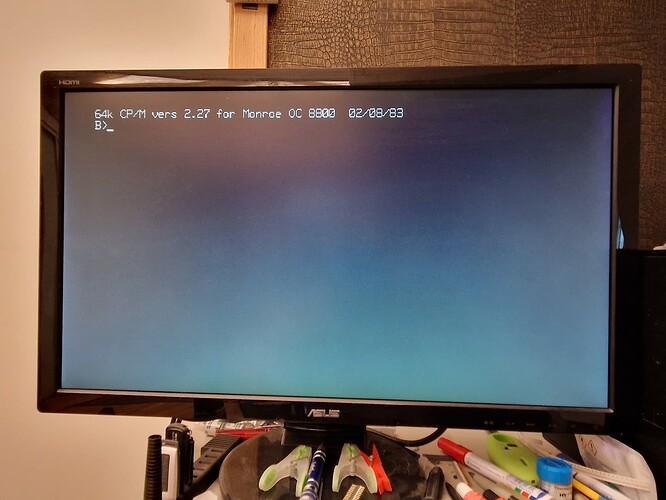 TEP392 please check the CRT8002, I would guess that the problem is there

Outstanding work! Thanks for posting and thanks for the info on the DIAB machines. I’ve been keeping an eye on Ebay for any Monroe documentation or software, but all I ever see is calculators. Please do post anything you find. I suggest you submit any docs and software you find to Archive.org.

And thanks for the suggestion for my video issue.
Perry

I will uploaded it in some form, the problem with the software etc is that its located around 2000km from my home. So its planned to get access to next spring. It will be picked up by a friend of me that runs a private computer museum (abc80.net and his files for swedish computer are to be found here Index of /archive/luxor). There is also one OC8820 and one OC8880 so we will have info at that time.

BTW OS8 was heavily inspired by OS/32 for interdata. The basic for ABC80 and i guess the Monroe basic and OS8 also was compiled on the same machine interdata 7/32. I have one of the core memories for this machine

I have uploaded some documents that i did get yesterday evening. More to come.

Please check my git ABC80/monroe - Gogs in the doc folder

Thanks for that, but it’s a huge file! It’d be great if you’d upload it to the Internet Archive, then we’d have an easy paginated view (and free OCR, if that’s not there already)

When there is more time. Right now its just scanning a placed for my own usage

Fair enough! Would you be OK with me uploading it?

Sure np at all!, I still scans more

Uploaded one more to the git repo

Nice work, thanks for the help