What was the trinary computer?

I remember reading something about a russian computer that worked in trinary but knos nothing beyond the wiki article. Does any other infoexiat?

What use if sny would trinary have?

Here are a couple of pointers:

Your computer uses ones and zeros to represent data. There’s no real reason for the basic unit of information in a computer to be only a one or zero, though. It’s a historical choice th…

http://ternary.3neko.ru/setun.html
" Setun’ operated on numbers composed of 18 ternary digits, or trits , giving the machine a numerical range of 387,420,489. A binary computer would need 29 bits to reach this capacity." 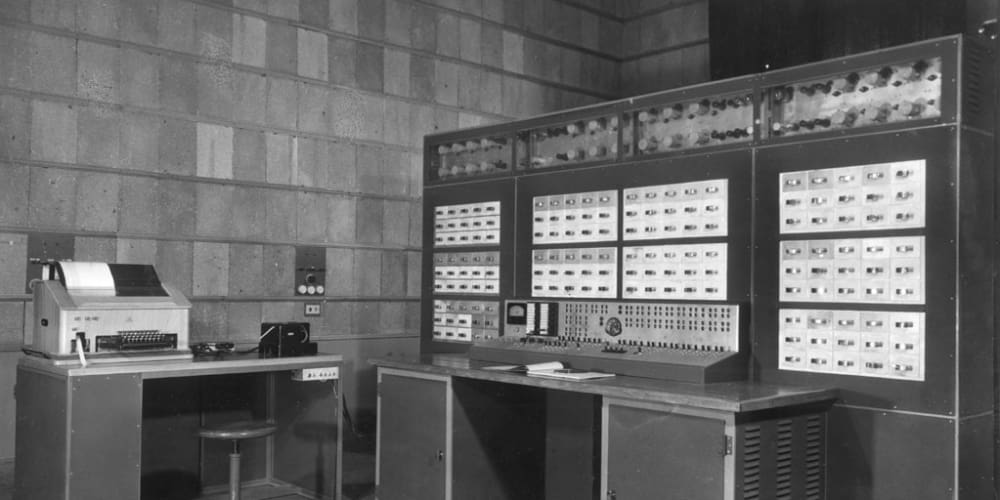 A look at the balanced ternary notation and it's use in Setun, a Soviet computer.

Trinary, or ternary, has some advantage, in some sense I don’t fully understand, of needing a little less effort to do arithmetic. See here where we see this quote:

There’s also a tempting engineering advantage: in electronics, one could use positive, zero, and negative voltages (or currents) to signal the three possible values. (Just possibly it might be possible to do the same magnetically: north, south, unmagnetised.)

Trinary, or ternary, has some advantage, in some sense I don’t fully understand, of needing a little less effort to do arithmetic.

It’s not less effort to do arithmetic (it’s actually more when you get down to real hardware designs). They’re talking about radix economy, which is, very roughly, measured by the number of different digits you need to handle (two in binary, three in trinary, ten in decimal) multipled by by the length of numbers of the range you need to store (e.g., 42 can be stored in two digits in decimal, but takes four digits in base 3, 1120, and 6 digits in base 2, 101010).

This is a “theoretical” number, as should be clear from the fact that e (2.718…) is the most efficient base on average; obviously we can’t make devices that work in that base. Which system will be more efficient in practice depends greatly on the details of your particular implementation (though it won’t be e!). Things affecting this include the range of numbers you choose to represent, the particular application, and the kinds of devices you have available and their costs.

The Computer hardware efficiencies and subsequent section of the page I linked above give two examples.

There’s also a tempting engineering advantage: in electronics, one could use positive, zero, and negative voltages (or currents) to signal the three possible values. (Just possibly it might be possible to do the same magnetically: north, south, unmagnetised.)

There is actually no such thing as a an absolute positive voltage; voltages are always and only relative to other voltages. When we say “this point is at +5 V,” there is always an implicit “relative to this other point in the circuit” added to that, where the other point is usually some arbitrary point we’ve designated as “Vss” or “GND” or whatever.

So your system could be equally well described as using zero, positive and more positive voltages for values merely by declaring the lowest voltage values, relative to the other two, as the “zero,” rather than the middle one.

This clearly changes nothing about the cost or reliability of the circuit (since it’s exactly the same circuit!), and perhaps helps make it clear why the “engineering advantage” of such a system is the same kind of “advantage” as moving to ten levels of voltage, and has the same kinds of disadvantages.

Archive.org has just a torrent-link to the report for the High-Speed Computing Devices Task Group (1950). Has anyone a more conventional file-link (PDF)?

The .djvu file in that list is the original scan; you can download that directly. All major Linux distros will have tools for reading and manipulating these; just search for “djvu” in your package manager. For Windows users, I just checked on my test Windows machine and it came up in a program called SumatraPDF.

I don’t know why the bot hasn’t done its usual PDF conversion, OCR and whatever it does for display in the on-line reader. It would probably be worth contacting archive.org to ask about that.

use .djvu some pdf readers can read that.( Sumatra PDF)
OCR never works.

Thank you all. I chose DjVuLibre for Mac, which does the conversion to PDF without any hiccups. (I find the .djvu format and/or app a bit clunky as compared to the Preview app, which comes with the system.)

Regarding Setun, an interesting aspect of this was that it was based on ferrite cores and not on the usual active switch technology, like tubes or transistors.

For use of magnetic cores for processing (as opposed to core memory), compare this classic, two-parts US Army instruction film (mind that this is about “conventional”, binary processing only):

My friend Manuel Viet made a video about these: https://www.youtube.com/watch?v=a2nrCrNDAHk
Check his channel

At least one person has this as an active project: https://hackaday.io/project/28579-homebrew-ternary-computer

At least one person has this as an active project