What is this circle with vertical line and cross symbol?

Does anyone know what this circle with a vertical line and cross through it means? I found it in Figure 3-1-3 Sound Signal Flow on page 3-1-4 of the official Super Nintendo development manual. 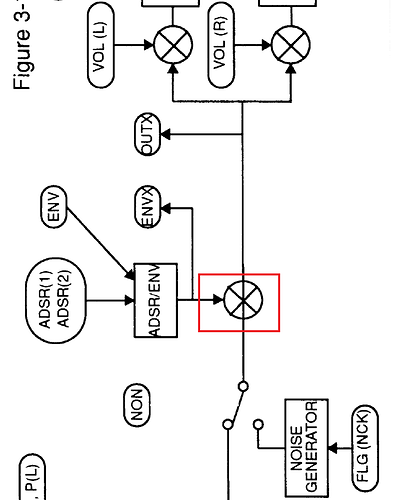 There are several other circles with crosses in them - each with two inputs and one output - which I assume are amplifiers, but this one is different.

I think it’s a mixer, or in DSP terms, a multiplier. Pages for logged out editors learn more In electronics, a mixer, or frequency mixer, is an electrical circuit that creates new frequencies from two signals applied to it. In its most common application, two signals are applied to a mixer, and it produces new signals at the sum and difference of the original frequencies. Other frequency components may also be produced in a practical frequency mixer. Mixers are widely used to shift signals from one frequency range to another, a process ...

Sometimes it’s used as a variable amplifier, sometimes as a kind of modulator, as I dimly understand it - depending on whether the two inputs have similar frequencies, or one is slowly varying compared to the other.

Ah, I see now that the symbol you’re interested in is drawn differently from the two mixers. I think the answer is going to be that this is again, strictly, a mixer, but is used as an amplifier - the envelope would be varying slowly compared to an audio signal - and so they’ve drawn it differently. (It might be a standard use of a symbol.) You could think of it as an amplifier with variable gain control.

Having a closer look at the diagram, it uses the mixer symbol as pointed out by @EdS for the volume control (actually more a regulator), but it may be just the component they are using for this (which should be possible, with just one input connected). With the line passing through it appears to be shaping the sound envelope (ADSR: attack, decay, sustain, release).

I suppose, there is a VFO (Variable Frequency Oscillator) to the left/bottom and the incoming signal is either from this VFO or the noise generator (at varying frequency, but at a constant amplitude). The amplitude of the signal is then shaped to a given ADSR envelope and the resulting signal is passed to OUTX (headphones or cassette?) and the left and right volume controls.