What is an Operating System? A historical investigation (1954–1964)

What is an Operating System? A historical investigation (1954–1964)

Today, we could hardly imagine using a computer without an operating system , it shapes and frames how we access the computer and its peripherals and supports our interaction with it throughout. But when the first computers were developed after World...

(Interesting, but I’m struggling with a very US-centric text…)

Ah, relegated to a footnote:

GEORGE was the name given to a series of operating systems released by International Computers and Tabulators (ICT) in the 1960s, for the ICT 1900 series of computers. These included GEORGE 1, GEORGE 2, GEORGE 3, and GEORGE 4. Initially the 1900 series machines, like the Ferranti-Packard 6000 on which they were based, ran a simple operating system known as executive which allowed the system operator to load and run programs from a Teletype Model 33 ASR based system console. In December 1964 IC...

And Strachey gets a say in the body text:

Strachey lamented that the computer was used inefficiently, considering the high speeds of the processor, and of the input and the output. Therefore, he proposed “the concept of timesharing between operators […] to allow […] manual programme checking at a special console”, and also to do maintenance. To handle the complex co-ordination, Strachey described some hardware devices such as interlocks and interrupts, and a “Director […] master programme designed to cater automatically for the conflicting demands of a number of stations of different types within a predetermined basic plan”

(Interesting, but I’m struggling with a very US-centric text…)

Ah, relegated to a footnote:

I’ve always felt that the first operating system was Turing’s programming manual for the Manchester computer (completed 1950). Not initial orders, but a social order, including access restrictions based on tasks and users, a bureaucratic ring model.

This paper looks worth a look too:
P. Brinch Hansen, The evolution of operating systems (PDF)
(There are a few choice quotes here)

History of the OS
Two distinct phases of history
Phase 1: Computers are expensive

Both of the above from (or from near) the site of the free book
Operating Systems: Three Easy Pieces (not a PDF)

Oddly enough I saw a post about TSS/8 recently, with a great title:
Time-sharing in 12KW: Running TSS/8 On Real PDP-8 Hardware 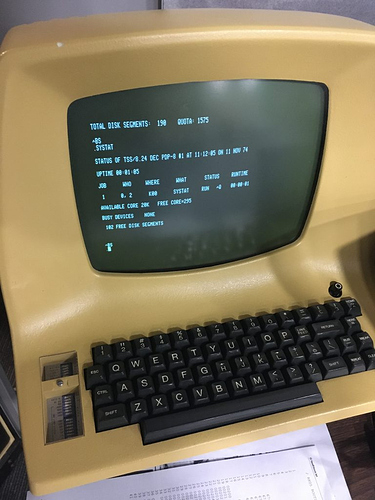