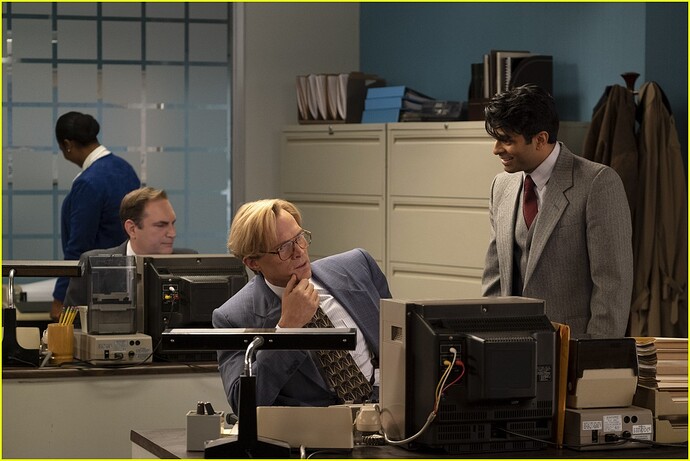 WandaVision had a bunch of these set up as 1980s office computers, in the configuration most common here in the USA (Commodore 64 breadbox, Commodore 1702 monitor, and Commodore 1541 floppy drive). The C64 and 1702 was hooked up with working video cables, but the 1541s were only hooked up to power. It seems they used the C64’s normal power on screen, and maybe some typed in PETSCII for some stuff, but otherwise various graphics were CGI’d over it.

Not sure about the identity of the printer in the background.

The 1702 in the foreground has a stock Commodore 128 video cable attached to it; it’s functional even if the floppy drive isn’t hooked up. The 1702 in the background has what appears to be a random A/V cable hooked up, but …

Hmm … even if the background 1702 is indeed hooked up to a random A/V triple cable, it could still be fully functional. IIRC, my C64 came with a black video cable that only had two RCA outputs (composite and audio), so it hooked up to the FRONT of the 1702. But the guys putting together the set would realize the background 1702’s would look out of place with nothing plugged in the rear inputs. Basically …

Note that here in the USA, as with elsewhere, C64s were rarely used as office computers.