Hi. I have this un-opened and sealed computer. I wonder if any one could give me any info. I cant find it anywhere on the internet. I dont want to break the seal on the box as I am sure it will hold more value.
Thanks i 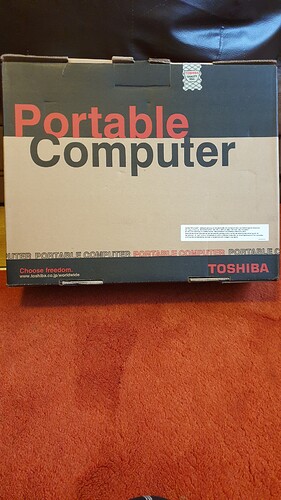 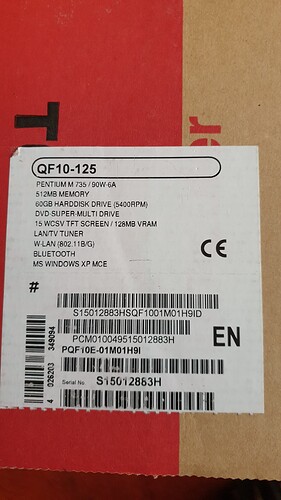 A quick search for the model number turned up this site, which I’ve never really used before:

Wikipedia also has a page for the product range:

The Qosmio series (dynabook Qosmio in Japan) was Toshiba's consumer-marketed line of high performance desktop replacement laptops. The laptop was first released on July 25, 2004 as the E15-AV101 with a 1.7 GHz Intel Pentium M CPU, 512 megabytes of DDR SDRAM, and a 15-inch XGA 1,024 by 768 screen. Toshiba's most powerful laptop has undergone many revisions, with focus shifting from high-end multimedia functionality to heavy gaming. The current line, the X70 series, was released in 2013, featuring ...

It seems they were also on sale in the UK:
https://www.laptopsdirect.co.uk/toshiba-qosmio-f10-125-pqf10e-01m01h9i/version.asp

And here’s a page with specs and photos:
http://ixbtlabs.com/articles2/portopc/toshiba-qosmio-f10.html

LAN/TV-Tuner (as stated on the label) sounds interesting, quite a media machine…

Thanks for the replies. I have ansolutely no knowledge of this stuff so I really appreciate it.
So how do I know what age this one is? I am looking to sell it. Would you have any info as to where would be a good site for this (UK).
Thanks

The Pentium M 735 was introduced in mid 2004, and superseded by the Core M (Solo) in January 2006. Any time between those dates would be a fair guess, unless there’s an obvious production date elsewhere on the box. Look for something like 04nn, 05nn or 06nn (or possibly swapped: nn04), where nn is the week of the year, 01-52.

Unless you can connect with a serious XP enthusiast (they exist, but I’m not sure why) with an unboxing problem, it may not be worth much. The Pentium Ms were neither fast nor particularly power efficient. It has a lithium battery and capacitors that are old enough to vote. The hard drive is of the DeathStar (aka Hitachi DeskStar) era. The TV tuner will be analogue, and hence will be listening for long-forgotten signals. It will have a real parallel port, though, and I know several CNC machine shops that depend on ancient XP machines to keep their tools running.

The Pentium M 735 was introduced in mid 2004, and superseded by the Core M (Solo) in January 2006. Any time between those dates would be a fair guess

The manual (compare the link) agrees with this, stating a copyright of Sep. 2004. Wikipedia claims, “The laptop was first released on July 25, 2004” – and this aligns well, given that the manual is a European markets edition (so probably a bit later). Also according to Wikipedia, the F10 was superseded by the F45 series in Feb. 2007. So “somewhen inbetween mid 2004 and (late) 2006” should be spot on.

The serial number on the label is S15012883H
There’s even a Toshiba serial number lookup on the web, but it seems to be too old for this (older than 15 years).