I found this device on ebay (the seller don’t know what it is).
I think this is a word processing system. Red, VFD display, 1 line. Probably 70s.

Some keys are also unusual. ETX is probably end of text. CLR is clear.
The arrows with the line on top might be SHIFT? I found only this Unicode ⭱ (U+2B71), but I think this is a newer, other, regular arrow. Very weird is the key with 3 vertical lines and one short diagonal line in the middle. There are German umlauts, but QWERTY instead of QWERTZ.
So what are these characters and are they on Unicode? I haven’t found them but there are too many characters.
And what is that interface? And what manufacturer? Should be Japanese.

Is there an online OCR for a single handwritten character painted on screen? I remember that there were some, at least for kanji characters. But I can’t find them anymore.
Another interesting word processor is this (Olivetti DE 523, some more also at this museum) Olivetti Model DE 523 word processor, comprising integrated unit with screen, 2 cassette tape drives and keyboard in single casing. Keyboard has 24 special function keys devoted to word processing. Made by Olivetti in Italy about 1975. This unit had...

There’s https://shapecatcher.com/ but it doesn’t give me a match for the three-lines-with-diagonal symbol. It’s odd (to me) that there are two keys with that symbol, quite close.

You’ll notice there’s a letter ß, called Eszett, which is also in the German alphabet - I’m sure it’s for a Germanic market, but for some reason is (as you note) QWERTY. This might make it relatively early, predating some standardisation.

It’s also strange, that there’s no logo, not even a sticker on the rear. But I bet underneath (no photo of that).
I don’t think that it’s that old (older than 70s) because of the display.
And there are many (old) standards, especially in Germany.
The keyboard looks of good quality and the keys are similar like the ones from Siemens (except the color). But should be made in Japan.
I doubt that it’s the only one with these special characters.
I have to check on deskthority.

This is something I expect to see being repaired/refurbished on Jerry Walker’s YouTube channel. If you haven’t checked it out yet, you really should. He’s a very intelligent and interesting chap, and his videos are always informative.

P.S. I’m pretty sure those displays are LED dot matrix, not VFD.

That keyboard looks useful, unlike todays keyboards with 1001 windows and function keys and not a accented or special character to be found.
Ben.
PS: Still using a IBM AT keyboard,
it works well, why change.

I have checked many vintage keyboard on the deskthority wiki and forum but haven’t found any with this key. On a Nixdorf CT 11 there’s one with striked two bars (bottom left) next to delete. Maybe this or the one I’m searching for means delete word or just delete character (as CLR might mean clear all) 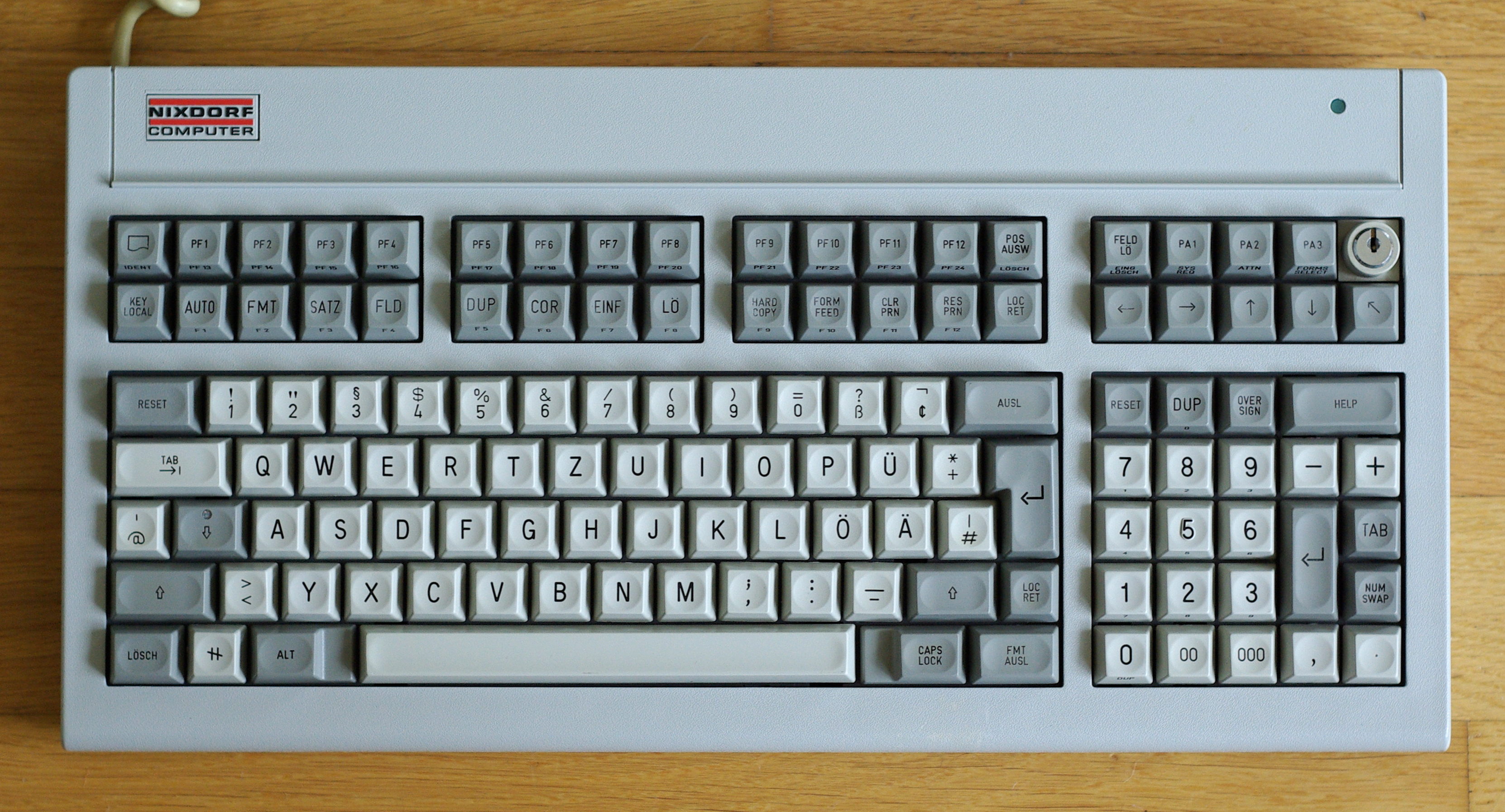 I also found keys with KILL and KILL WORD (on Kroy 190 but that is a labelling device).
Another key is SKIP, FLD ERASE (Decision Data 8010).
Another key is a curved arrow (left to right) on electronic typewriter AEG Olympia Carrera (top right)

Searching for word processors, I found some interesting devices
Panalina (This is just a design maybe for a video game, 1955 alien style), Viatron and Scrib (latter one a very early laptop with cassette has 3 bars, but they are just " and , 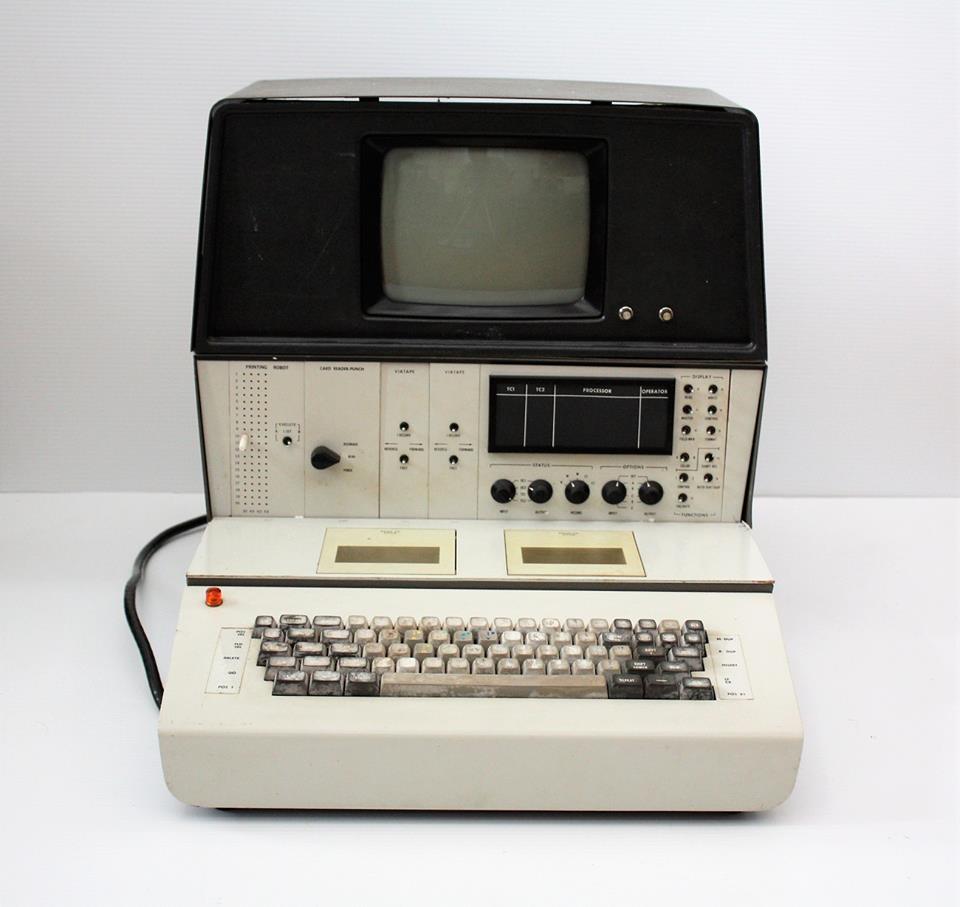 One idea is some kind of comms meta control, such as a BREAK condition, as the device looks like it’s for typing a line of text and then sending it. Or perhaps ATTENTION, except I can’t see any way that symbol could mean that…

BREAK seems plausible, but it is strange that there are two keys with that symbol… although it could be that one key (or both) have been taken from another keyboard.

However, I don’t know why there should be two of these keys. (Is this actually for overprint, as in start and end overprint sequence?)
In its pictorial form, this could be a BREAK (or ESCAPE), as well, as pointed out by @EdS and @rwiker already. It could be also for sending a shift mark for changing character sets (as opposed to the shift key, which is more a “PICT” key in teletype terms).
Finally, three slanted dashes is also DELETE (“␥”, U+2425,“SYMBOL FOR DELETE FORM TWO”) and this may be a derivative form of this.

I think, it’s safe to assume that the arrow keys with the bar on top are shift keys and the one with the arrow between bars is probably a shift-lock.

Otherwise, yes, these are common German special characters: “Ä Ö Ü ß”.
The Umlauts are in standard positions, but the “ß” (“Eszett” or “scharfes s”) is normally found in the top row. Generally, non-alphanumeric characters are here found more often in their respective US position than in their common German positions (e.g., minus/hyphen, dashes, etc), also it’s QWERTY as opposed to German QWERTZ – an interesting and peculiar mix.

Edit: The segment mark is 0x6F in EBCDIC and normally transcribed to “?”, 0x3F, in ASCII.
(I think, IBM mostly used “?” as a representation for this, but the segment mark sign is found in some punch card related documentation.)
In BCDIC, it’s punch code 0-7-8 and in IBM 026H (Report and Programming), as well.

Very interesting! Completely agree on the shift and shift lock.

Ken Shirriff has a worked example for a successful proposal to add a character to Unicode, in this case the U+2BD2 GROUP MARK.

Thanks very much!
Someone might think EBCDIC is EBCDIC but there are variants. Has this something to do with code pages? As there are many different EBCDIC code pages. (All I’ve checked has a “?”, at least we know it’s a German layout). Unicode has some many characters but not this one? Maybe it’s another German code standard?
I have found this interesting site with different punch card codes. Different models and manufacturers had different codes. And different meanings on different hardware.
Like a slashed b and V V (the slashed V can’t be copied there and turned an unstroked one )
(8-7) square root (on IBM 7040) , tape mark on IBM 1401

https://homepage.divms.uiowa.edu/~jones/cards/codes.html
I still haven’t found that symbol online.
And there’s also the question about that device, purpose, manufacturer.
And what about the curved arrow from the Olympia? 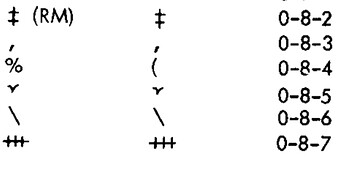 See the last line (this is IBM 026H, Report left, Programming on the right), mind that these are hand-drawn characters. Clearly, the imprint on the key is stylized, but still, it’s not entirely the same.

Other ideas:
To me, the arrangement at the top outer right near the CLR and ETX key suggests that this has something to do either with deleting something (this is also where would look for a backspace or erase key) or with mode switching. Read as an icon (a dashed vertical line terminated on both sides by vertical lines), the sign on these keys would suit both cases to some degree.

Could it be the case that the keys can be placed in any orientation on the key stems, and one of the two keys has been rotated 90 degrees (or 270)? The keycaps seem to be flat, and if the key stems are MX-like, it should be possible to rotate them.

Here’s another example (in a chart with other special symbols, which may come handy), from the IBM 1410 Principles of Operation, p.7 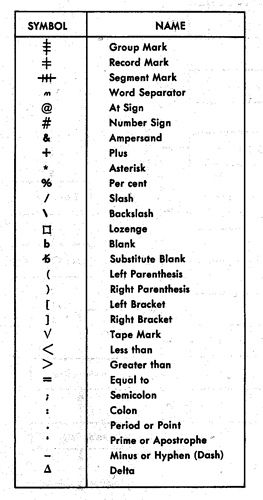 Very weird is the key with 3 vertical lines and one short diagonal line in the middle.

I haven’t found an image of it online, but this reminds me very much of a symbol used for the ignition switch on some tractors and similar equipment, at least in the US. I cannot imagine why that would be on a terminal, though, and in particular why it would be there twice.

I think, it’s safe to assume that the arrow keys with the bar on top are shift keys and the one with the arrow between bars is probably a shift-lock.

I agree strongly with this, particularly as the arrow between bars is immediately beside what appears to be an LED indicator.

We should note that the diagonal crossing line only crosses the middle vertical line - I don’t think even @NoLand’s investigations have found anything like that.

It reminded me a little of the choke symbol - when petrol engines had manual chokes, which give a richer mixture for starting a cold engine. It’s meant as a diagram of a butterfly valve, I think: 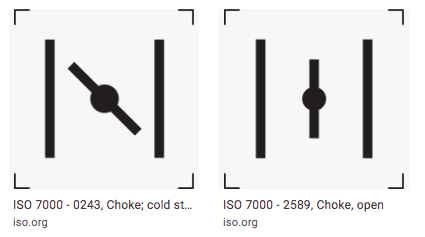 and in particular why it would be there twice.

Another, rather speculative guess: what, if this symbolizes cutting a line, which would be the control key? (It doesn’t add up with anything like cutting line two of three, though.) Surely, you’d want a control key and I can’t see any on this keyboard.
We may even speculate that the second one would normally go to the extreme left position on the 3rd row, which is here taken by the “ß” key (where is shift-lock nowadays). This would be a common position for CTRL on earlier keyboards, on the left and right of row 3. It would also explain why “ß” is located so peculiarly outside the normal block of alpha-numeric keys.

(Backspace, which seems to be at SHIFT+“ß”, would have normally been where the upper of the two “Is-it-CTRL-or-not”-keys is located in this layout. This makes some sense to me: they had to find a key for “ß” and relocated the left CTRL key. It would have made even more sense, though, if they had just dropped the second key and kept backspace where it’s normally found. However, as a German keyboard user, you’re used to minor nuisances like this.*)

Edit: As I’m now rather convinced of this, sorry for side-tracking regarding the segment mark.

*) Fun trivia: guess where the UNIX home directory is on a German Mac keyboard – yes, it’s Option+n and it’s a dead key, so you have to press SPACE after this. And the square brackets are on Shift+Option+5 and 6 respectively and not marked on the keyboard, etc, etc. There’s a cost for having umlauts, ß and § (the latter being used to mark legal paragraphs)…

Just to make a point, what would we think of these keys in this rearrangement?

That’s what it was, not the ignition! I knew I saw it somewhere on my tractors.

I found the curved arrow. There’s also one pointing left.
I continued checking the vintage keyboards on the deskthoritity wiki and found it on a Siemens Nixdorf keyboard (there’s just one). It’s for SINIX

The manual (English+German) says SHIFT to position of next/preceding word SML, SMR. S is shift, L/R is left/right, not sure what M is, probably movement. Page 93 for English

There are also 4 other delete keys, one DEL and one with an X (Backspace) and Delete character and delete word (as I found on other keyboards). DEL has different meanings and is mainly for termination of a program
There are also several character tables of dead keys ISO 8859-1 etc, but I haven’t found the striked lines.

It’s possible that they replaced the key caps and they are aligned at 90/180 degrees, but it’s unlikely that they misaligned both keys. Maybe one key is a replacement for another key, they didn’t have.
Deletion is likely or TAB.