Unix Tell All Book From Kernighan Hits The Shelves

A must get. UNIX: A History and a Memoir by Brian W Kernighan is out (Amazon link). Article about it at Hackaday:

While Kernighan is no stranger to book authorship — he’s written several classics including “the white book” for C and Unix — he has a new book out that is part historical record and part memoir about the birth of Unix.

Usually, when a famous person writes a retrospective like this, it is full of salacious details, but we don’t expect much of that here. The book talks about Bell Labs and Multics, of course. There’s serious coverage of the first, sixth, and seventh editions with biographies of people integral to those releases.

The final part of the book deals with the explosive growth and commercialization of the operating system along with its many descendants. Yes, Linux is in there, of course, as is BSD and others. In broad strokes, this probably doesn’t add a lot to what we all know about the history of Unix, but the personal details and just hearing it from a primary source is worth the price of admission.
[…]
We do wonder how many other Kindle Direct paperback books were typeset using groff. We are betting not many.

Great! I see there are a couple of discussions on HN, including links to a couple of related video interviews:

And Kernighan appears in this too (“one of two that Bell Labs made in 1982 about UNIX’s significance, impact and usability”):

there’s a Unix history narrative which begins at Bell Labs goes to Berkeley and then out to the world; this is already extremely limited, in that it ignores Wollongong (where the first Unix port was done, to the Interdata/32, and where important work on TCP/IP networking was done) and what AT&T did with Unix after they closed the sources and what the Research Unix people were up to after Seventh Edition, but I think the biggest loss is that it completely sells Multics short: Unix began when Bell Labs left the Multics project, so Multics, in this narrative, is frozen in time as this unfinished thing that Our Heroes are already bailing out of, and that’s what gets handed down, as if Multics never progressed an inch beyond 1969. Heck, you can even see this as Myth #1 on the multicians.org site

For what it’s worth, this is one of the topics Kernighan’s book covers. He goes over the breakup in pretty good detail and does talk about the further evolution of Multics.

See also the second of the two videos by AT&T:

Yay, the book has arrived in time for some holiday reading.

I flipped through the book and saw this photo of his Bell Labs badge and I had a laugh. 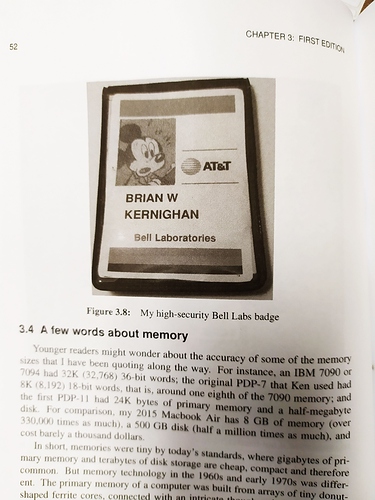 Got A plain text version or epub of the book anywhere?
I can’t buy a version for my kindle.

I can’t buy a version for my kindle.

The Amazon link (see the first post) now lists a Kindle version as available to me (in Singapore).

Do you mean the Kindle version isn’t being offered to you in your region? Or you rather not get a Kindle ebook version?

As far as I know, a ebook version of it in other formats (ePUB) isn’t being sold.

I have a Kindle Paper White ( 6.5 inch screen).
For that book format, it is not a supported device.

We do wonder how many other Kindle Direct paperback books were typeset using groff. We are betting not many.

Maybe so. But alas the ‘Kindle’ version doesn’t work with actual Kindles. I’m having to read it in the Kindle app on my iPad, which is annoying.

For that book format, it is not a supported device.

He probably wrote the thing with troff, vs some format that could be readily flowed on to multiple screen sizes, fonts, and resolutions.