I’m trying to find a list of computers produced by Monroe company without any success. I have found an entry for it on old computers site http://www.old-computers.com/museum/computer.asp?c=1078&st=1
but no more that it. 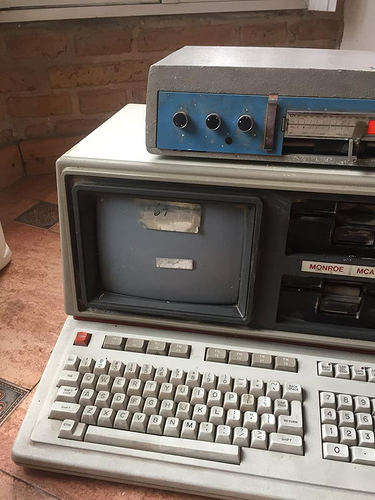 I have found that a person near to my town it’s selling a Monroe MC200 but I couldn’t find any information about it.
I would like to know which kind of machine is and if it’s defective which chances I have to repair it.

Regards, and thanks in advance! 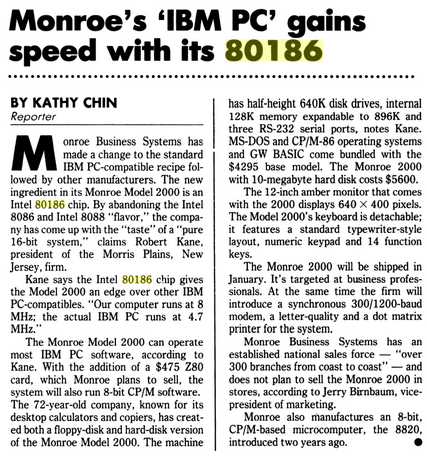 “Monroe Model 200 Electronic Billing System is a new billing machine with the simplicity of a typewriter and the accuracy and speed of a computer. ln a classroom environment the 200 serves as the basis for learning proper invoicing procedures.”

It’s really intriguing, I could agree with it be the Model 200, but it seems to be more complex, it’s held two floppy drives and it seems that it has a modem at the top. The owner believe that it’s a kind of teletype, but I don’t think that it could be this either.

I have found An InfoWorld note mentions two units with Z80 processors and CP/M support.

I have found another picture from a Museum here in Argentina: 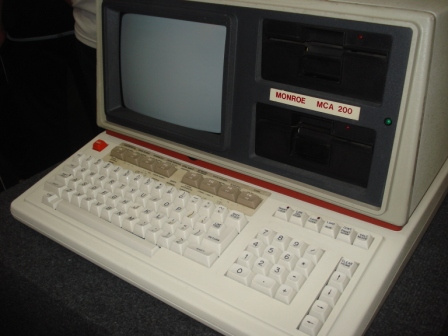 I have asked them if they have any information about the machine. I’m suspecting that this model could have been re-labeled to be commercialized here, or maybe they have assembled here under license of Monroe.

Does anyone have this kind of microcomputer? It’s easy to find software to run on it? I would like to listen your stories group

I’m a novice on the retrocomputing, I have resurrected several machines and I have adopted them with love, but I have several limitations on the costs and the available space. I would like to have it running and using it, but without available software could be an impossible mission, and it’s something that needs a lot of space and isn’t cheap (with the costs that I’m managing now).

This seems to be really interesting machine (which is new to me, so I’m of no help). It’s remarkable how many manufacturers did their own OS, even (or, rather, especially) multiuser/multitasking ones.

Mind that there’s one quite recent comment (from 2018) at old-computers providing a contact address of a commenter, who seems to be savvy and apparently has the manuals. May be worth a try…

Other: An interesting time fold found in the comments at old-computers

The following year Monroe came out with an 80186 processor machine with “Open Office” by Software Products International”. Open Office did everything MS Office did, but better. Office 2000 was about the same. I sold the fool out of that one too.

(Mind that this isn’t related to what we know as “Open Office”, which originated from the German “Star Office” suite.)

I agree if I have the luck to acquire one, I will try to share their details with the group :).
I’m afraid that I will have problems to find software for it, but in the worst case, I would need to recompile CP/M from scratch to run it on the machine. Without pictures or any other information is a box really mysterious.

There is a benchtest of the Monroe 8820 in Personal Computer World Magazine from April 1982. I have a copy of that magazine so I just scanned and uploaded the review to Archive.org. You can access the PDF here

Welcome to the forum, and thanks very much for the article!

It feels to me like the MCA 200 must be a variant product of the 8820 - probably the same hardware inside, but perhaps produced as an appliance - maybe a remote terminal. In the photo from the museum, it looks like maybe there are blanking plates, and no floppies fitted. Most likely that means the machine has an interesting ROM which runs some standalone software, or communications software. Do those function keys have interesting labels? That could tell us something.

In the photo from the museum, it looks like maybe there are blanking plates, and no floppies fitted.

If you’re referring to the photo from Argentinian museum, I can discern some regular floppy drives there. (Rather faintly so, due to exposure, but there are definitely drives.)
Here’s an up-scaled aspect with brightness added as well. 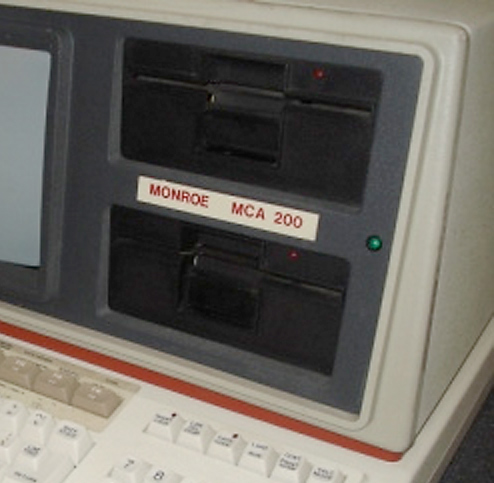 If the photo were available in higher resolution, the function key overlay might tell some about the machine’s original application and purpose.

Hi everyone! The museum people have answered my question:

Monroe has assembled these machines in San Luis and La Rioja (both provinces of Argentina). Monroe has changed the model name to MCA 200 but in fact, it’s an OC-8820.

Sadly, we don’t have any information about where they have been used, or if they have any additional difference in their software. I have read that these machines couldn’t work without their proprietary OS “MOS”, seems that the SO has been lost, I couldn’t be able to get any reference to it. The only information that I have found it’s that MOS is a derivative of CP/M, nothing else.

"It used its own multitask operating system developed by Litton Industries called OS8MT, but a CP/M OS could be acquired separately along with a specific Monroe BASIC interpreter, Dbase II database, Wordstar word processing, and a SuperCalc spreadsheet. Even under CP/M, You could run a Spreadsheet report and still run Wordstar. "

It looks like there were 2 operating systems… If the insides were simple enough, maybe Fusix will run on it

(Already mentioned earlier)
Regarding software, if you have a look at http://www.old-computers.com/museum/computer.asp?c=1078&st=1, there’s a gentleman by the name of Francesco Nidito, who (as of 2018) was trying to run his 8820, suggesting that he would have at least some software for it (hopefully an OS). By then, he was looking for manuals and may have been successful in the meantime. As he provided an e-mail address, which is also stated on his public website, it’s possible to contact him. (The fact that he maintains multiple open source projects may suggest the he’s accessible.) – Maybe he could provide some directions, if not copies of the OS disks?

I have already sent him an email, I hope to have a bit of luck with him. Meanwhile, I’m trying to contact the seller of the machine, he has told me that he couldn’t found the power cable and some “boxes” that were stored with the machine. This has been some days ago.

I’m crossing the fingers waiting for a response from both. Any update I will let know to the group

“Some boxes that were stored with the machine” sounds pretty interesting. Hopefully, these were not disposed but do show up eventually. With a bit of luck, these “some boxes” may contain everything you want. – I’m crossing fingers…

Finally, I have been able to get the machine! It seems that it works, but it’s really dirty. It needs a lot of cleaning and care but sounds promising 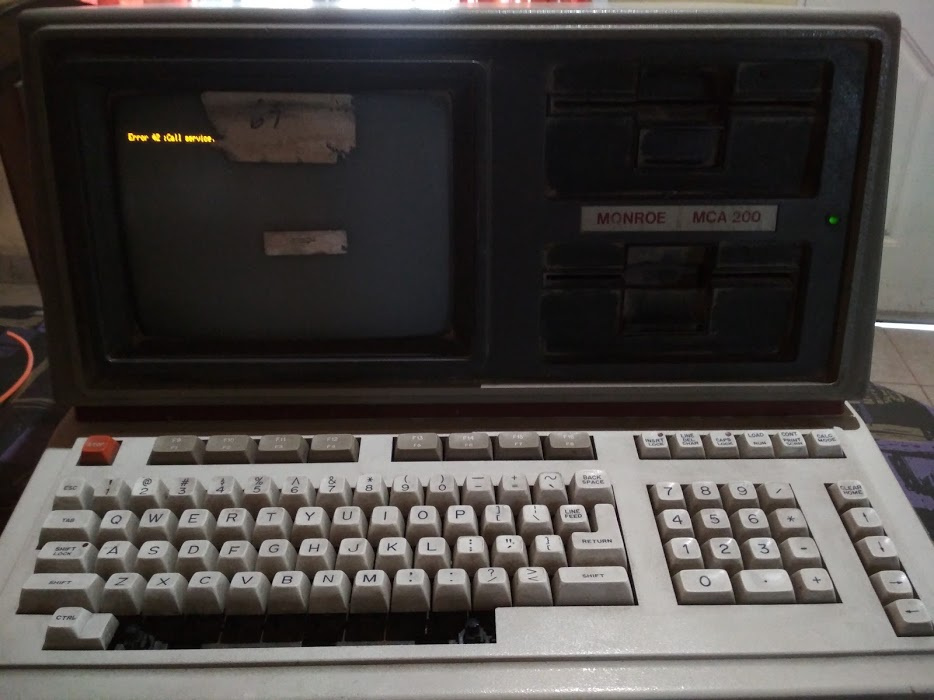 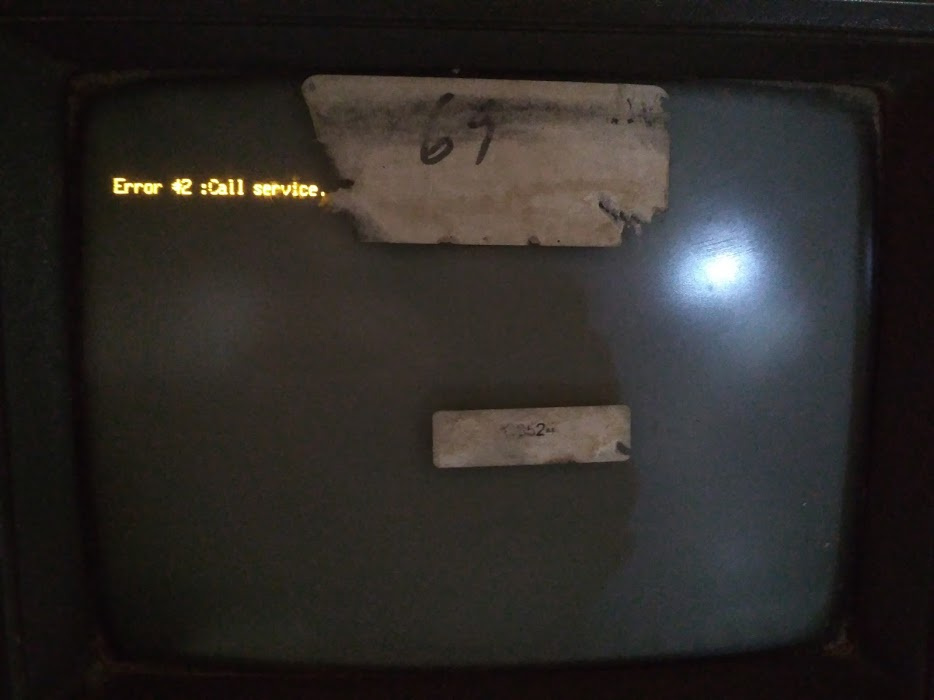 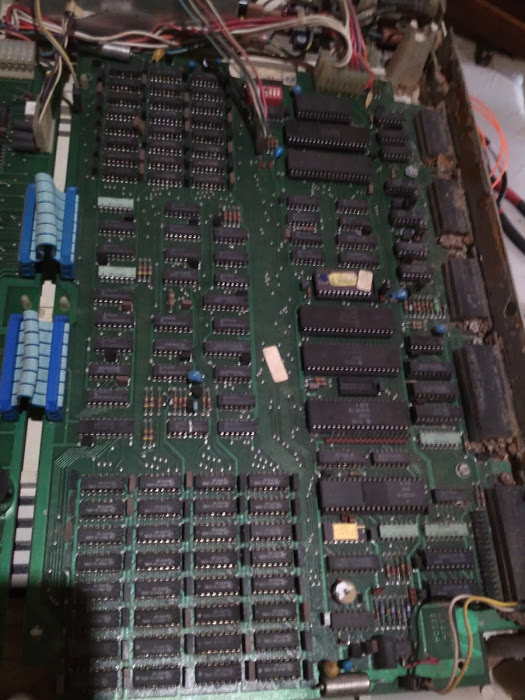 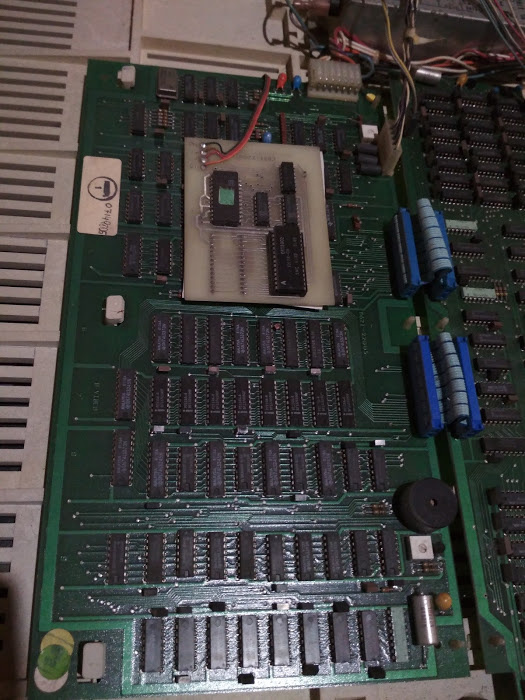 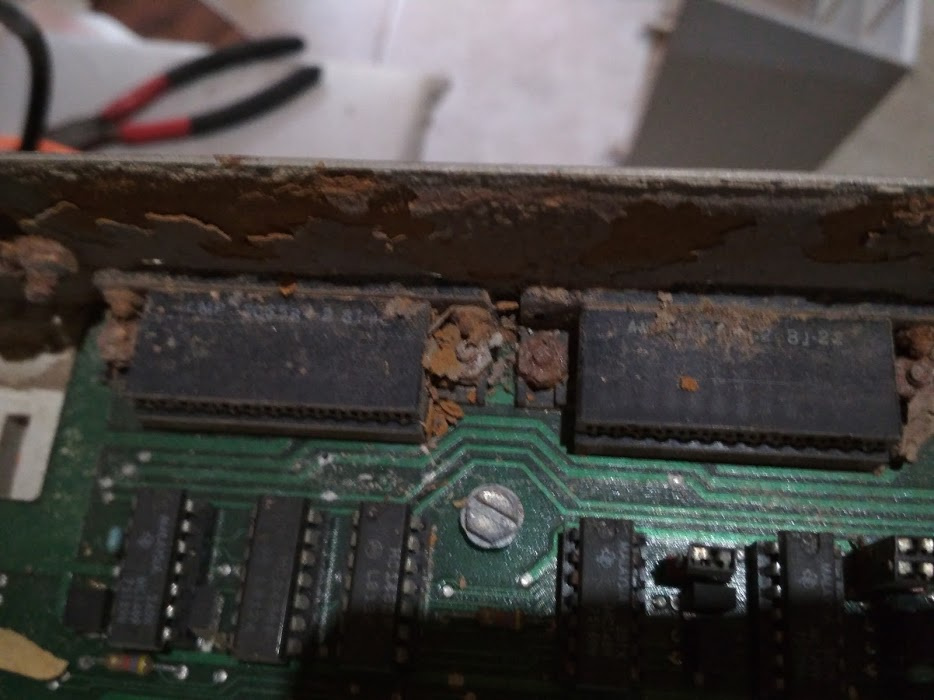 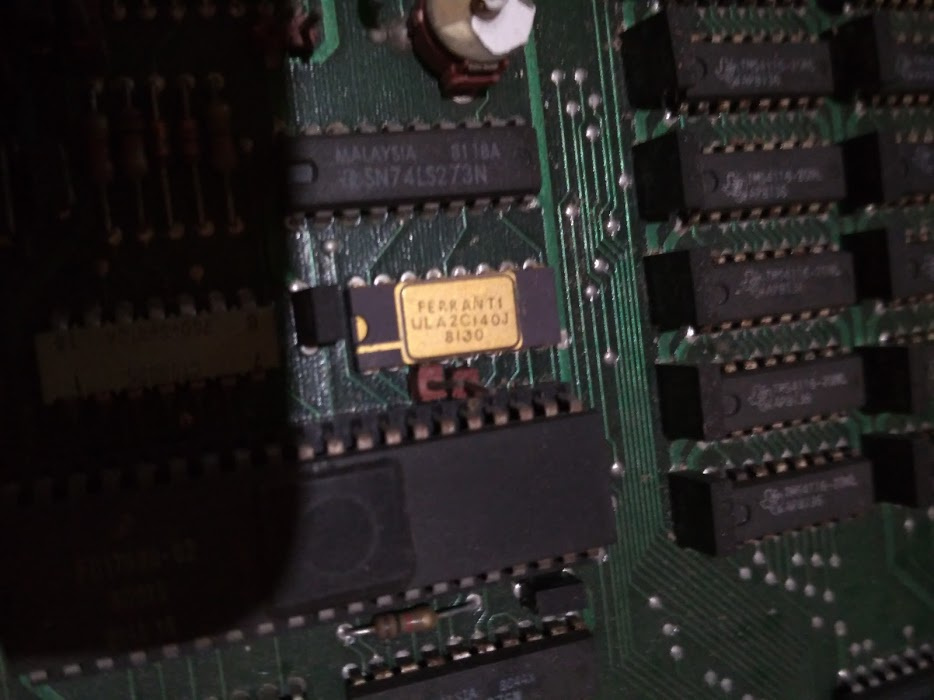 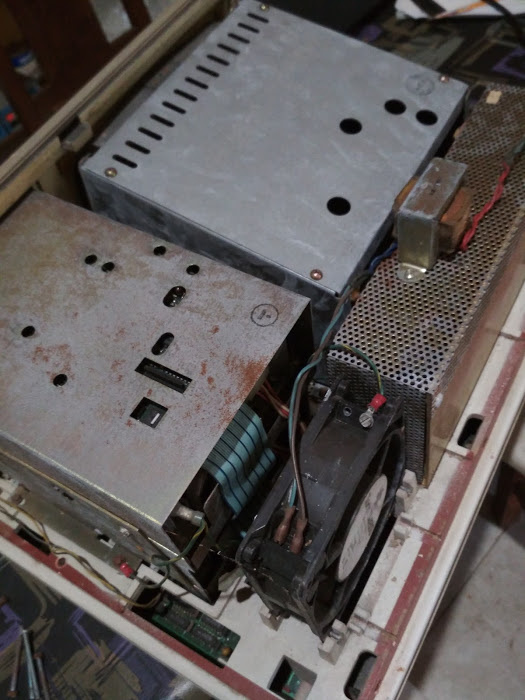 I have confirmed that it’s a Monroe OC-8820 with two floppy disk units, and has been manufactured here.
I will create a new topic when I start their repairs and cleaning. Thanks for your comments and patience!
Any information, tip or comment are welcome!

This is a pretty machine! The image with all the rust on the ICs however may be a nice opener for next year’s Retro Computer Halloween (not that this is a thing).

The position of the fan is somewhat interesting. I guess, the floppy drives may need a good cleaning.

I thought I would go ahead and post a shot of the OC8820 I found in my father-in-laws crawl space. Thanks for the links posted in the introductions thread. I’ll start a new topic when I get it home and start working on it.
Regards, Perry

I’m happy to see that he kept it off the floor. Storing old computers on porous concrete - which allows water vapor to seep through - has killed many an old system.

I remember him talking about finding an “old terminal” about 10 years ago, but never what it was. I’m hoping his crawl wasn’t too damp and I don’t find much corrosion inside.