Not really a computer (I think) but still interesting. I tried looking up some background information on this but couldn’t find relevant links.

Radio Shack’s first smartphone, test-marketed for two weeks in late 1982 in Fort Worth and Boston, has been unfairly forgotten by history. 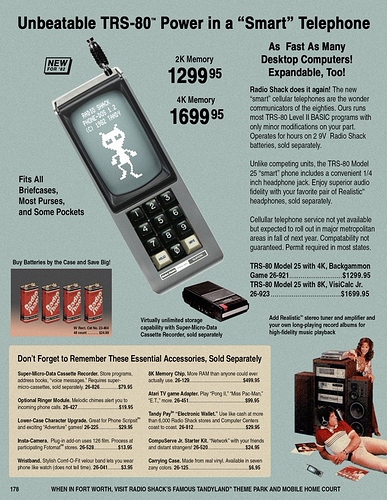 It turns out to be a spoof… which is a pity because the Model 100 was groundbreaking, and portable, and connectable:

The TRS-80 Model 100 is a portable computer introduced in 1983. It is one of the first notebook-style computers, featuring a keyboard and liquid crystal display, in a battery-powered package roughly the size and shape of a notepad or large book. It was made by Kyocera, and originally sold in Japan as the Kyotronic 85. Although a slow seller for Kyocera, the rights to the machine were purchased by Tandy Corporation. The computer was sold through Radio Shack stores in the United States and Cana...

The display, though, is Leo Christopherson’s famous Dancing Demon demo as seen here:

and as seen modified in George Phillips’ blog, which has much of TRS-80 interest:
Doubled Dancing Demon

Really? A spoof? Ah, that explains the lack of real references to it.

Yeah, for whatever reasons it was never Tandy/Radio Shack’s style to try and make portable or smaller versions of their classic TRS-80 line. Maybe it was just too difficult anyway, looking at how huge the Model III and Model IV backplanes were.

Instead, the Coco and various portables would be acquired from others, without any consideration of compatibility of any sort.

That said, just look at the SX-64. Cramming a fully functional Commodore 64 into a “portable” form factor didn’t exactly result in a practical device. A portable classic TRS-80 would be an even more difficult fit.

Yeah, I was almost taken in by this until I looked at the screen and asked myself, “is that a CRT?!”

That said, just look at the SX-64. Cramming a fully functional Commodore 64 into a “portable” form factor didn’t exactly result in a practical device.

I never got the chance to use one for more than a few minutes here and there, but it seemed eminently practical to me, no different from an Osborne, Kaypro or Compaq portable. (Certainly the Kaypro II was eminently practical; I used one as my primary machine—used mainly for word processing—for a few years in the late '80s and early '90s.)

I see no reason that the classic TRS-80 could not have been reworked into a similar “luggable” form factor: The TRS-80 Model I from 1977 is quite small already. Of course, that’s missing the disk controller and has less RAM, but I just pulled out a TRS-80 Model III motherboard (1980) I have kicking around, with disk controller and sockets for 48 KB of RAM, and it’s only 33 × 23 cm. I’ve little doubt that by 1982 they could have replaced much of the 7400-series logic with something more compact, but even if not, that board itself would fit into a (perhaps slightly taller) Kaypro-style case with a 9" monitor and a couple of full-height 5.25" diskette drives above it.

Instead, the Coco and various portables would be acquired from others, without any consideration of compatibility of any sort.

The CoCo was a Radio Shack internal design, in partnership with Motorola. That explains the switch to the 6809 and the MC6847 video controller. The original design was actually for a a cheap Videotex terminal, but swapping out the modem and adding a few other things produced a decent home computer, and Radio Shack did need something with colour at the time.

I don’t see the lack of backward compatibility as a bad thing, actually; one advantage was that the 6809 opened up the computer to much more sophisticated software than was available on the Z80-based TRS-80s, such as the multitasking, multi-user OS-9 operating system.

Yeah, I was almost taken in by this until I looked at the screen and asked myself, “is that a CRT?!”

It’s a very nice spoof. The antenna is all wrong as well, and CRT or no, the proportions were all wrong to run any legacy program. (Plus there simply being a 10 Key pad).

I did enjoy the “Virtually limitless storage” option, however.

The CoCo was a Radio Shack internal design, in partnership with Motorola.

Wasn’t this more or less the MC6809E/MC6847 reference design, which is why the Dragon is nearly compatible?
But I really don’t know how much Tandy/Radio Shack was involved in the process of the reference design and/or how much say they had as a driving party regarding specifications. At least there was, of course, the prehistory with the Green Thumb project and the AgVision/VideoTex terminals…