Help me identify a prop: 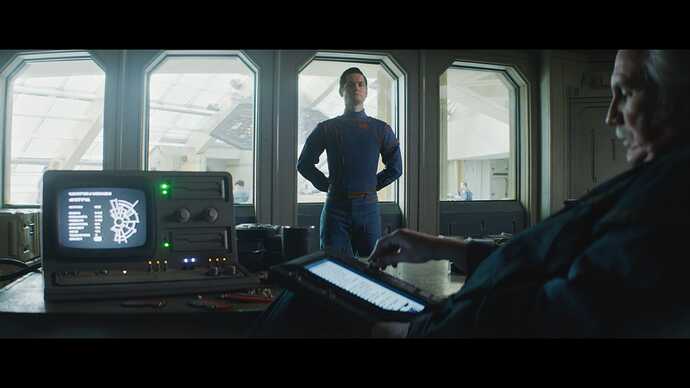 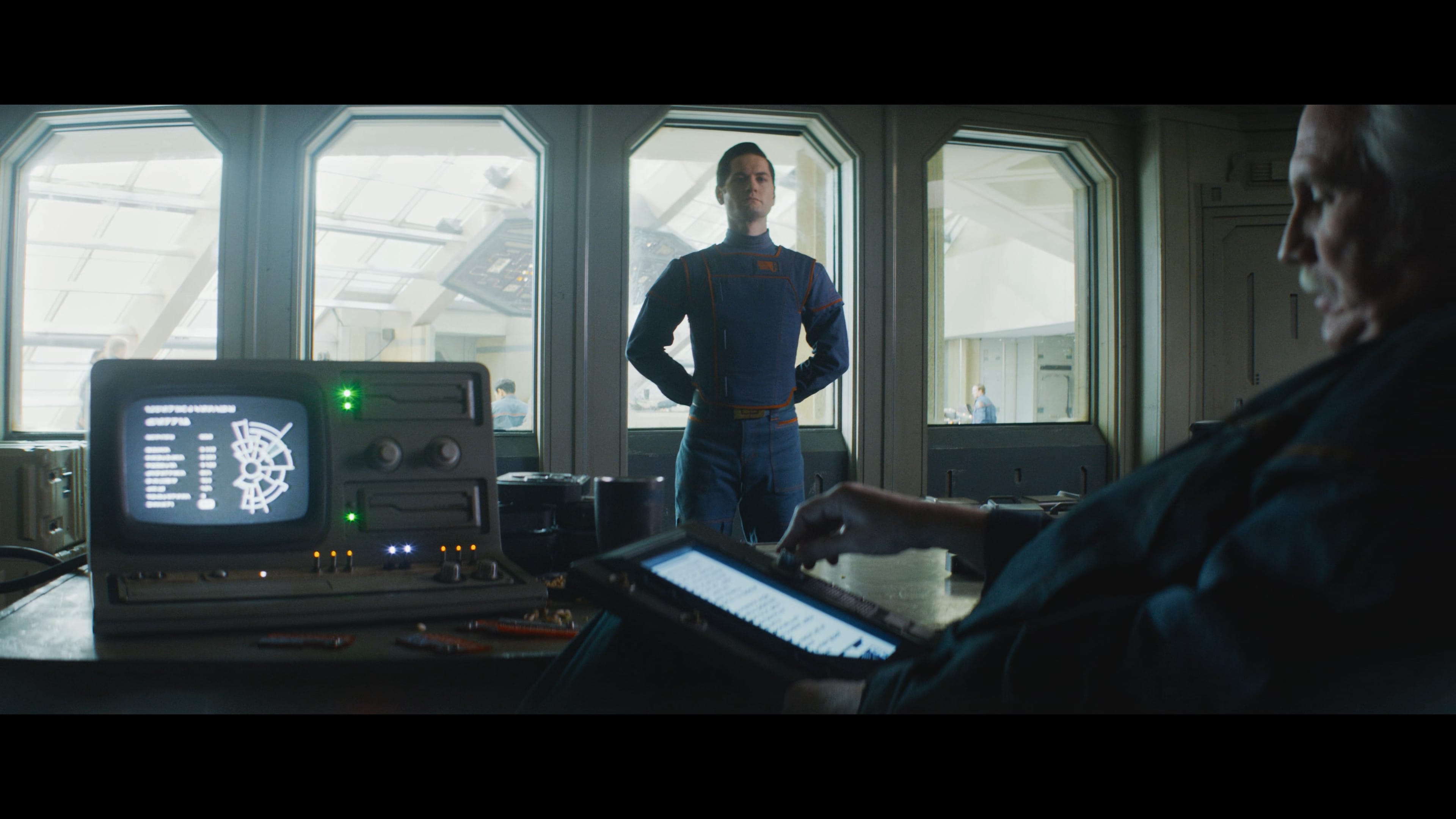 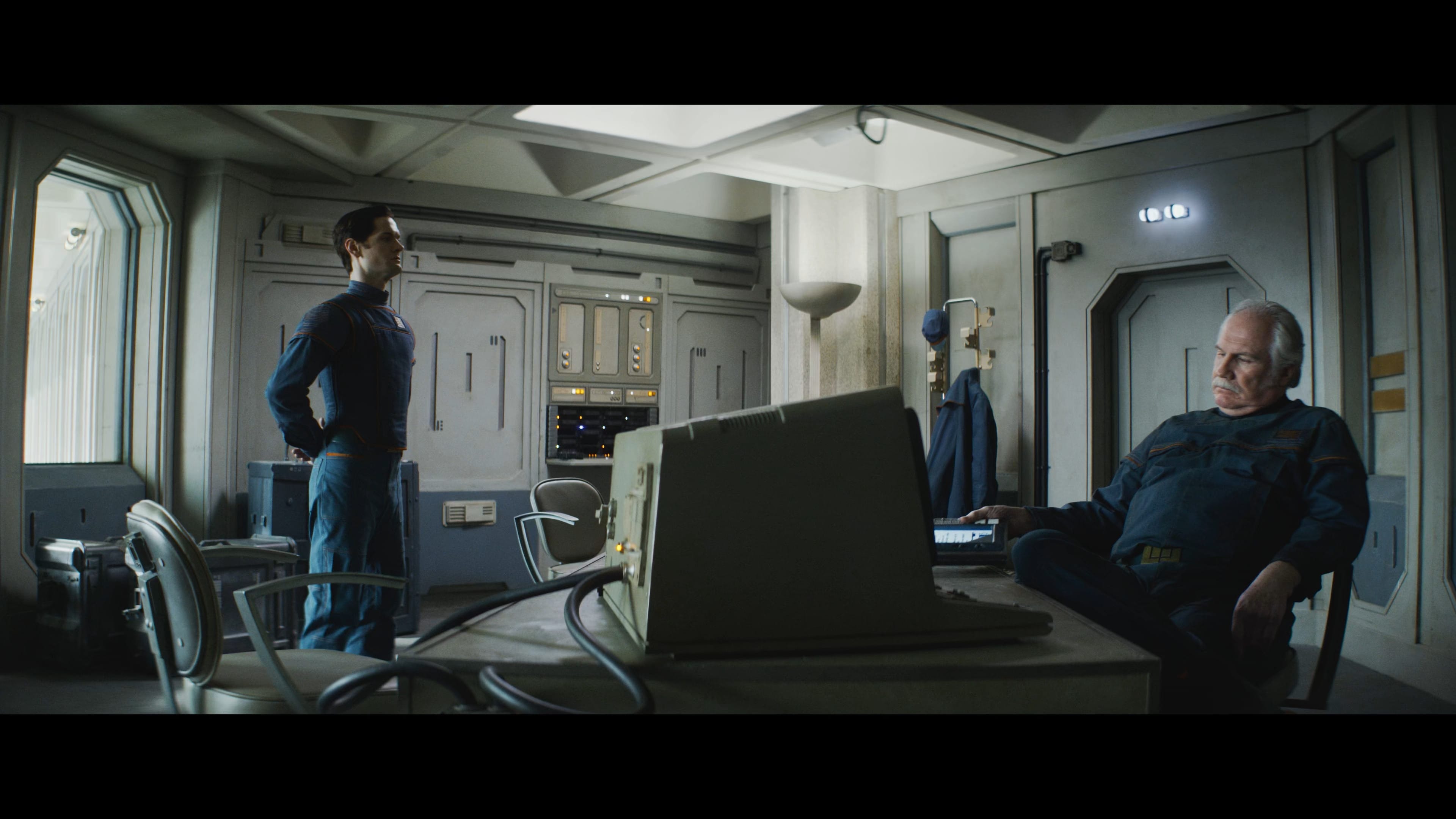 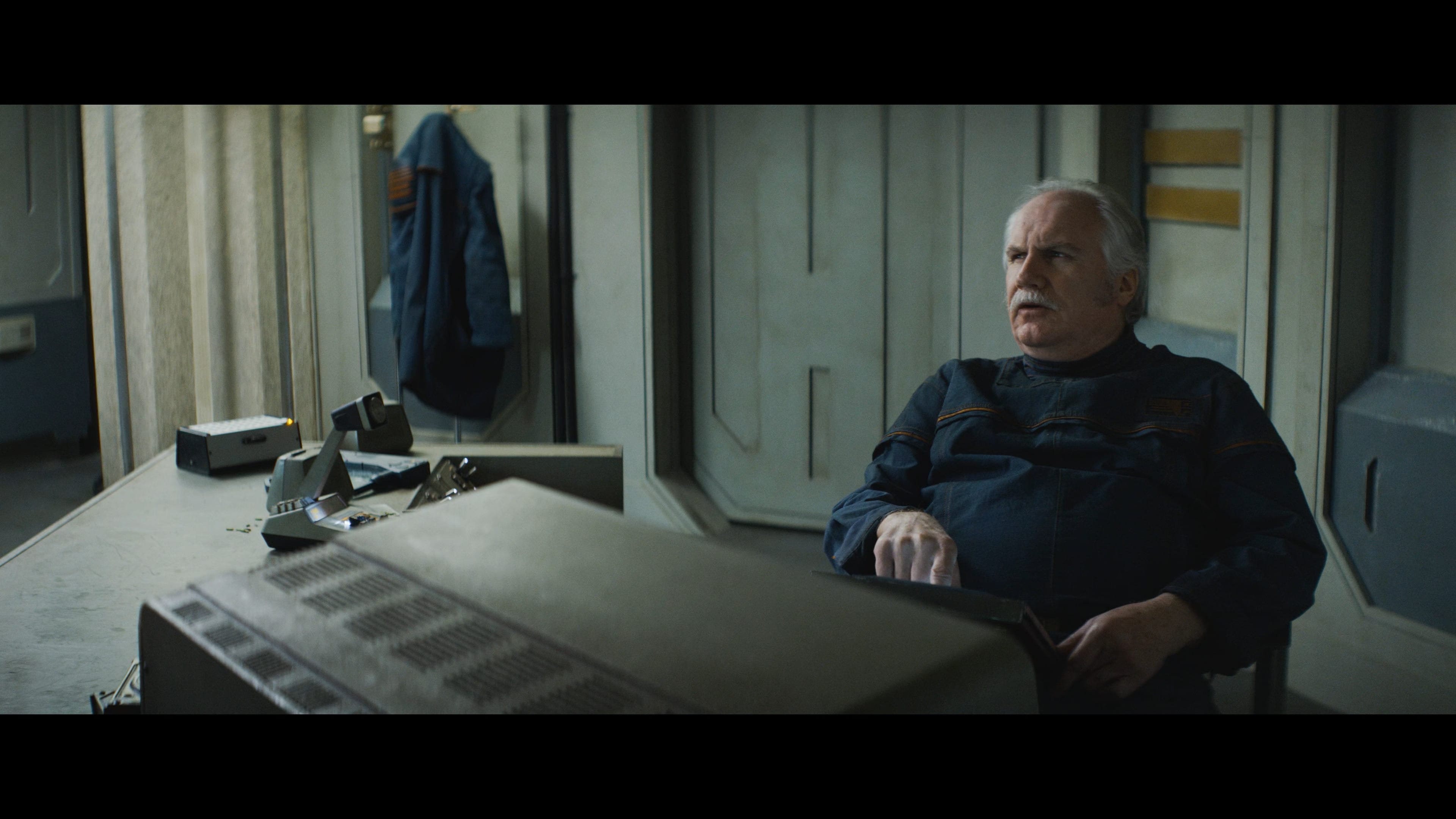 My first impression is that it’s a TRS-80 Model IV, or maybe a spray painted TRS-80 Model III. However, I think that Andor is filmed in the UK, and I don’t know how much the TRS-80 sold over there.

Anyone familiar with how popular (or not) TRS-80s were in UK?

For comparison, here’s a photo of a TRS-80 Model IV with the top vent grilles visible: 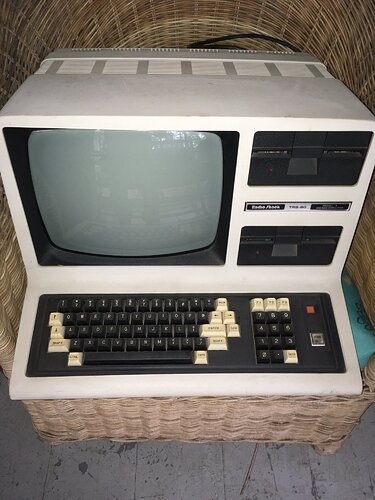 Based on the layout and spacing of top vents alone, I’d say you’re correct in your assumption.

It’s got that quite visible horizontal seam running across the front and side as well, reminiscent of a Model IV. If it’s not a modified one, it’s certainly a homage.

There’s a good chance it was lent by the CCH in Cambridge, which means it might be this one:

The stores in the UK were called Tandy, and certainly carried the other (smaller, cheaper) TRS-80 models. They had a free catalogue which was good browsing! The 1980 catalogue has the Model I and Model II as well as the handheld - haven’t yet found an appropriate later one.

Definitely not that one! That’s a 4P, which has a different case. Also, the computer or terminal used for this prop was wrecked to turn it into the prop. Although it might be possible to undo the modifications.

The same case was used for TRS-80 Model III as well as the somewhat obscure Tandy DT-1, and maybe some other stuff I’m not familiar with.

AFAIK, none of the various TRS-80 clones cloned the case, but I’m not very familiar with this stuff.

Definitely not that one! That’s a 4P, which has a different case.

TRS80 was Tandy Corporations desktop microcomputer model line, sold through Tandys Radio Shack stores in the late 1970s and early 1980s The successor to the Model III was the Model 4 April 1983,......

Anyway, I’m still curious how popular (or not) the TRS-80 Model I/III/IV were in the UK, or really anywhere around the world. They were very common here in the USA.

Having a few of them in a British Museum doesn’t tell me much, because British Museums are kinda known for having stuff from elsewhere in the world. Somehow.

But anyways… I imagine, like … well, suppose there’s some Star Wars show being filmed in Los Angeles, and all of the people on the set are either too American or too young to recognize a BBC Micro. And the prop department slaps a BBC Micro on the desk, and no one else realizes this is going to make a bunch of viewers in the UK go, “Hey that’s not from a galaxy far far away!” Or something like that.

I think they must have been moderately popular here - in fact, when I went to college in 1980, there was one micro there, and that was a TRS-80.

One reason they’d be popular is the all-in-one design and price. And, surely, the software, whatever that might have been. But perhaps popular with professionals and small businesses rather than hobbyists? (And at least one school… or two.)

Once the VIC-20 came along, I would think that would take all the gaming and teenager interest. Which is to say, I think of the TRS-80 as a serious computer.

A comment on the UK market in 1983 has the CoCo peaking at 11th place:

Other oldies include Tandy’s TRS-80 Color Computer, which sported the same spec as the Dragon but a much higher price. Its sales peaked in the summer than dropped off, before rising again just before Christmas. But with an across-the-chart average of fifteenth place, it was never a major seller, though not a bad one either.

Here’s a single datapoint, a serial number of a UK model:

It’s a UK model, manufacture in Forth Worth, Texas according to the same label. Paul Becker says: My Model III was a 4K L1 basic ($699), serial number 618.

From which we might estimate 1200 Model III sold for the UK. Estimates from serial numbers might even be the best way - Tandy sold direct, so unless they reported their numbers, we won’t know.

In 1978 I was 15 or 16, at school (In Scotland) and as I’d shown an “enthusiastic” interest in computers I was asked to help the school (and the rest of the region - Edinburgh and surrounds) to pick a computer - we tested the Apple II, Commodore PET and TRS-80.

I don’t recall the actual TRS-80 model but it was quickly eliminated due to it being a bit slower than the other 2 and low-resolution monochrome graphics.

The PET was attractive from an all-in-one point of view, but slow cassette storage, bad keyboard and no real graphics soon eliminated it.

Actually, the Apple II won hands-down because discs, low and high resolution colour graphics, nice keyboard and sound (crude, but better than nothing!) So for the next 4+ years Scotland led the way in school computing… Or at least I’d like to think so!

In 1978 there would have only been the first TRS-80, which would be called the TRS-80 Model I after the (not compatible) TRS-80 Model II came out. Neither the Model I nor Model II had the all-in-one design of the iconic Model III.

Here in the USA, the Model III was popular in schools but there was a problem for home computer sales - the TRS-80 Color Computer. The CoCo was a lot less expensive, had color graphics, and could be hooked up to a TV. Someone might go in to a Radio Shack looking to buy a TRS-80 since that’s what their kid was using in school, but would end up buying a CoCo because it was less expensive and came in a box that didn’t require two people to carry.

Here in the USA, the Model III was popular in schools

I didn’t know this. I was much under the impression that this was entirely Apple ][ and PET domain. Was this concurrently, or did – for example – the Model III replace PETs?

I don’t know. I can really only speak directly from my personal experience - I’ve never seen a PET computer. Ever. Not in schools, not anywhere else.

There were lots of Apple ]['s and TRS-80’s in schools … I also remember at least one university computer lab with IBM PCs. Never any Commodore computers.

I don’t remember seeing Apple ][s in retail stores, but they were evidently well known enough because I knew quite a few people who had them as home computers. For a while they were easily the most advanced and capable home computers out there.

Commodore VIC-20 and later C64 would have a good presence in retail stores, and TRS-80 brand was of course all over Radio Shack (which was a huge nationwide franchise, including big presence in malls). But where I lived … never PET or CBM. None at all. I think maybe PET/CBM was more popular in Canada than the USA, but I don’t know.

This is interesting, since there seems to be quite a number of US Americans, who seem to remember the PET from school. (The USA are big, though, and I don’t expect school districts or individual schools to have been homogenous in any way.) I guess, the heyday of the PET in education must have been rather early, since Commodore eventually tried to compete with a PET-style packaged C64 (Commodore 4064 or PET 64, AKA Educator), made especially for schools, but this was (reportedly) not a success story and they had lost ground already. (I always thought this to be quite curious machine, but I’ve never seen one in person.) – However, this would have been the perfect time for the TRS-80 Modell III to show off as a competitor.

The USA are big, though, and I don’t expect school districts or individual schools to have been homogenous in any way.

They certainly aren’t; it’s also important to note that at that time (although this has been declining since the Interstate Highway system started major expansion in the sixties and seventies, it is still the case today) almost all control of education rests at the State and local levels in the US. Decisions like technology platform are mostly on a district-by-district basis. My school district growing up was all Apple II equipment, as was the largest neighboring district with which we shared some resources. More sophisticated classes were using early all-in-one Macintosh machines, and by later on, color Macintosh LCs. The local community college (a branch campus of a neighboring University), on the other hand, used IBM PC compatibles for almost everything. (This makes sense, as it was rather late in the game for Apple II, and the greater computing needs of higher education probably drove them out, if indeed they had ever used Apple II. We did have a robot arm with a //e controller card at the community college, so there was some Apple presence.)

I have heard of school districts using PET or TRS_80 computers (and in particular the Model III or the CoCo line), but from my personal perspective I would consider that unusual. I think the time window probably matters here, too, as you mention; I believe the Apple hegemony was greater by the early 80s than it was in the late 70s.

The Mandalorian was filmed in the Los Angeles area, so I’d be surprised if the interior shots of Andor were filmed in the UK. (But it’s not impossible). They use a very cool technology called The Volume,” a 300 degree LED video wall and ceiling (*). They use it for “set extension.” Instead of a green screen, they use a real-time video game engine to create an immersive filming environment that the actors and camera interact with. You can catch glimpses of it in several Disney+ “making of”documentaries.

(*) the first version of The Volume was 75 feet in diameter, the second was much bigger.

Yeah, but I think they’re not using that studio at all for Andor. As far as I’ve read, Andor is filmed in London and on location.

So, for example, they used the McLaren Technology Center to shoot a spaceport scene, which I guess would have been less expensive than pure CGI. (It had partial CGI, of course, for the starships and stuff.)

Thanks for setting the record straight, Isaac. Perhaps the UK production explains the show’s above average supporting cast and the retro approach to props.