This Guy is Building a Fairlight CMI

I stumbled onto this video a few weeks ago. This guy through a few very cool happenings found out he had some “extra” Fairlight CMI (Computer Musical Instrument) cards, so he embarked on finding all of the hardware he didn’t have, to build a CMI from spare parts. This is a pretty cool series of videos, and the project isn’t done yet.

As I am sure many of you know, the CMI was first introduced in 1979, and certainly falls under the umbrella of vintage computing.

This video notwithstanding, the idea of building a CMI through other means does interest me. Surely it could be done with micro-controllers or FPGAs. Now that is a project I would really like to see someone do. I would love to have an actual piece of hardware as a CMI, instead of an iPad app or plugin, which exist.

But for now this project will have to do.

Some technical detail here and even more so here.

From 1979 to 1985 several versions of the Fairlight were produced, with the Series III being the last of them. Each new series added updates to the Fairlight as technology developed through the early eighties. The Fairlight 1 and 2 had only 16 kByte of Memory per voice, and only eight voices but expanded to several megabytes and double the polyphony by the Fairlight III.

The sampler is the heart of the Fairlight. It’s a 16-bit resolution digital sampler with variable sample-rates up to 100kHz! Original Fairlight models used two standard 8 bit 6800 processors, updated to the more powerful 16 bit 68000 chips in later versions (the IIx had updated 6809 processors, which is what designated it a IIx over a II, and raised the sampling resolution to 32kHz, from the I & II’s 24kHz). In the Fairlight III, sample memory (RAM) comes in 28MB chunks per 16 voices of polyphony - wow!

Two processor cards are available: one with dual Motorola 6800 processors (used in the CMI Series I and II), and a 6800/6809 version (for the IIx). The two processors run interleaved on a 1 MHz common bus, resulting in a 2 MHz bus. In the standard configuration, P1 is an I/O processor (handling keyboard, screen, printer, and time-of-day updating) while P2 executes user programs and disk access. The machine can be thought of as a single-processor computer attached to a sophisticated terminal.

Shocking to think that a Raspberry Pi might be able to do the same. (Or even a Pico, for the earlier model.)

There is - or was - a Fairlight CMI in the Science Museum in London. Here are some photos from a 2013 visit, which has a couple of snaps of the CMI: 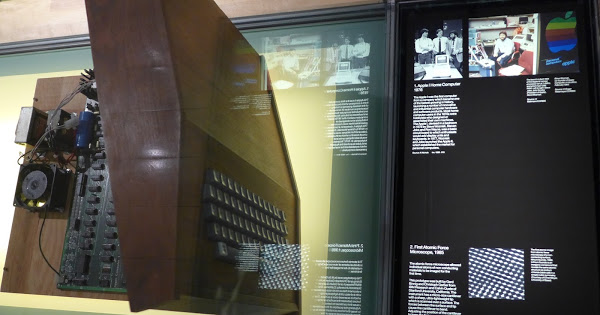 Truly a classic holy grail instrument. So many records from the 80s have CMI sounds on them. A friend of mine about 25 mins up the road owns one. Not sure what series his is.

I was glad to see the community has been modding these, replacing the 8 inch floppies with SD drives and such.