I wonder if we could collect some beautiful covers of interesting old books about computers? 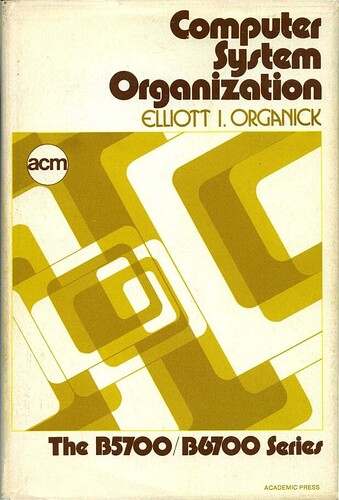 And the book (140 pages) is available at the Internet Archive:
Computer System Organization (The B5700/B6700 series) by Elliott I. Organick

(Back in the day of Google+, I recall we had a community called Computer History Book Club, with two sections: old books about computers, and books about old computers. But that wasn’t about beautiful covers!)

Here are two of my all-time favorites, which I also happen to own:

The first one isn’t exactly a book, but a self-laudatory IBM brochure from 1976, “produced by the editors and staff of Think, the IBM employee magazine, in collaboration with Will Hopkins as art director”. The cover design, however, in which we are especially interested here, is by Herb Lubalin. What makes this outstanding is this transition from Space/Atomic Age to Computer Age, which is captured perfectly by the minimalist design. This goes perfectly with the title, “It Was to Have Been the Nuclear Age. It Became … the Computer Age.”. 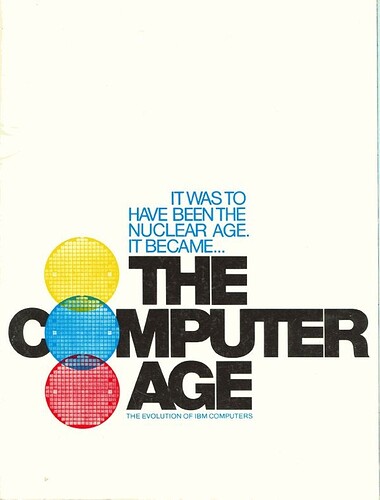 The second one is a third party manual to one of my all-time favorite computers, I will never own, “The IBM 5100 Portable Computer. A Comprehensive Guide for Users and Programmers” by Harry Katzan, Jr (1977). On first sight, it doesn’t offer any outstanding features, besides the go-to Vasarely-style Op Art, which became quite common. It really is the level of sophistication, the shades of 1970’s beige, the custom typography, a slight metallic shine of the bronze tones, which renders this a prime example of this era. 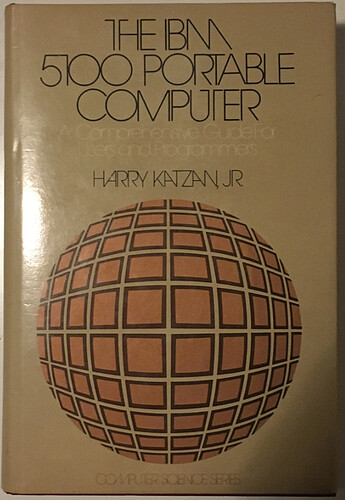 (Image source: lazy iPhone photo, sorry for the shadow on the lower right.)

Not a book cover, more a footnote to the above:

IBM had a bit of a thing with this space age / atomic age / computer age cross-over. Here’s a lapel pin, I guess, by IBM France. While this looks much older in its more conservative interpretation of the theme, we may actually tell by the logo that this is post-1972 (probably even from the 1980s): 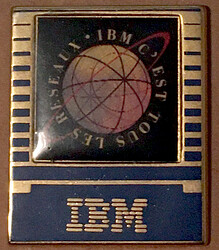 Wow, my copy looks nothing like that - it’s the mostly red/white educational version that Prentice Hall put out. Now I haz the sadz.