"There is a pdp11 emulator for ITS"

Here’s a photo of a VT220 logged into ITS, with the pdp11 emulator running PDP-11 Logo. 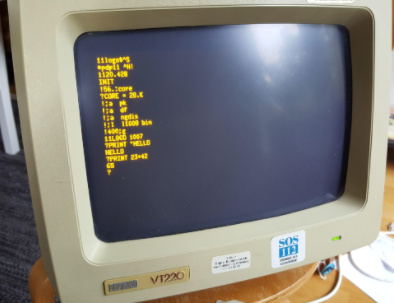 … I’d like to mention there is a pdp11 emulator for ITS. MIT had many PDP-11 machines offloading the main PDP-10 computers, and also standalone PDP-11 e.g. in the Logo group.

Bigger photo at the link. I’m supposing the ITS in question is running on a SIMH emulation - there isn’t yet a PiDP-10 although it is in the works.

(Wikipedia notes: “[The Incompatible Timesharing System] was written in assembly language, originally for the PDP-6 computer, but the majority of ITS development and use was on the later PDP-10”

Lars has also collected some photos relating to ITS.

@oscarv blogged about the upcoming PiDP-10 (which looks splendid) and comments about Lars’ ITS offering:

…more importantly, Lars has put tons of historical software on his ITS distribution. C, Lisp, Logo, the original emacs, all the old games - including the graphics masterpiece that is PDP-10 spacewar. Heck, the PDP-10 even runs PDP-8 and PDP-11 simulators.

But the ITS restoration effort did not stop at scraping off software and code from musty magnetic tapes around the world. Lars added the full hardware setup that grew up in MIT. Connected to the KA10 is a PDP-6 (so you can play spacewar without burdening Serious Users), a PDP-11 with the cool Knight TV terminals (so you can play spacewar burdening the Serious Users), an IMP networking interface, various graphical displays (a 340 on the PDP-10, a 340 on the PDP-6, a GT-40, and of course the Knight TVs. Plus a few Teletypes for maximum discomfort). It all runs out of Lars’ Github box - you find yourself the master of tonnes and tonnes of 1970s hardware. Phwoar.

Maybe of interest: @oscarv has set up a project page for the PiDP-10 on Hackaday, recently.

32 bits is not enough, but 64 bits is just silly. The PDP-10 was DEC's fabulous exactly-right 36-bit mainframe (or superultramini, because - definitions). This was the machine that Gates & Allen used to write Basic for the 6502, before they had...