Just seen this posted to alt.sys.pdp8

The PDP-8/E was introduced 1970 August 25.-28. at the Western Electronic Show And Convention Los
Angeles (WESCON).

To celebrate this I made a short clip:

If you like to read some words from Remo Vogelsang, the leader of the PDP-8/E development team, you
maybe have a look here (in German language)
pdp8/e wird 50!

Have fun and keep the old iron running!

Folks, you have to watch this thing. Just highlighting it. 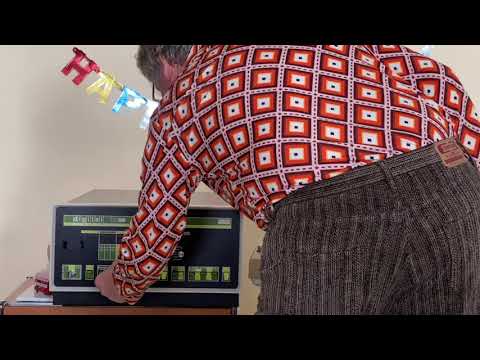 Nice long piece on the creation of the machine nearby:

Thanks for the video!

There was something magic about teletypes which isn’t there with display terminals - that chaka-chaka-chaka sound followed by the print head returning to the left, new line, and with a sudden stop - it was sitting there, expecting you to enter something. “Now it’s your turn!”. That feeling wasn’t there the moment I moved to a VDU (not that I would really go back, but…)

The Teletype was certainly more special in its way than later printing terminal with everyday dot matrix print head. Just didn’t have to worry about the dot matrix one shaking themselves apart.

One of the first programs I wrote for the teletype was a banner program that punched out text in large letters on the paper tape punch attached to the Teletype. I still remember working out the “bit maps” using ASCII values to punch out the whitespace around the letters. I used graph paper to map out the characters, and then worked out the ascii value for the holes to be punched.

All written in basic.

Did you have the high speed reader?