"The Near Impossibility of Making a Microchip"

Some materials about chip-making developments, particularly about the birth of the Perkin Elmer Projection Scanning Aligner…

From 1999, this 8 page article (PDF) as linked from The Chip History Center here.

According to the article, even a 2 inch wafer needs the equivalent of 300 megapixel resolution.

Early marketing materials emphasized the enormous improvement in mask life. “Contact printing was godawful,” Bossung says. “The emulsion [on the masks] would lift off. . . . After ten uses, the masks were useless.” Buckley agrees: “Places like TI were buying masks, literally by the truckload, using them six to ten times, then putting them in the landfill.” By contrast, the Micralign offered mask lifetimes of at least 100,000 exposures.

Ultimately, the Micralign scanner made the personal computer possible by allowing the necessary microprocessors to be manufactured cheaply enough for a reasonably priced unit. In June 1978 Intel introduced the 8086 chip. A year later came its sister chip, the 8088, which was used in the first IBM PC. These chips were about one-fifth of an inch square and contained some 29,000 transistors each. With contact printing, only 20 percent of these chips were salable. With the Micralign, the yield shot up to 60 percent.

Here we have the aligner that literally made the modern IC industry. Prior to its introduction contact and proximity aligners were the only available units. Yield was notoriously low, at 10 or 20%, often nearer zero. Intel reputedly worked with Perkin-Elmer to secretly arrive at its design. Word began to leak out that Intel had this marvelous new aligner which yielded in the 70% range.

And a half hour talk at “The Projection Aligner: Its development at Perkin Elmer in the 1970’s”

Also Perkin-Elmer’s brochure on the web here has a nice overview of the technical challenge and motivation. 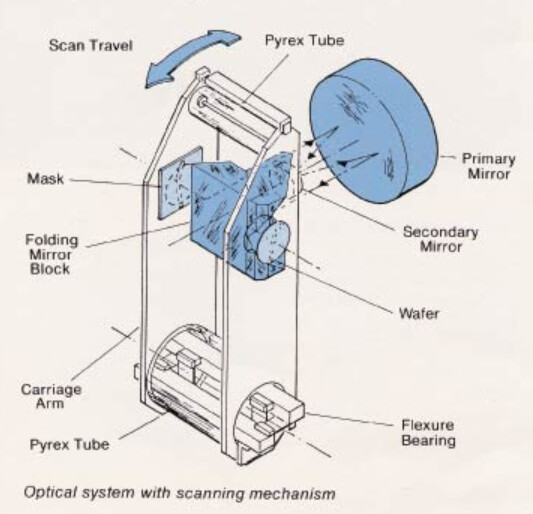 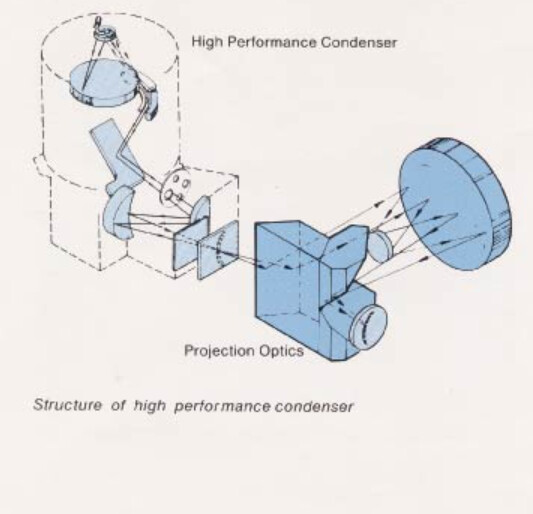 Nearby, an intermediate technology, the proximity aligner:

The Canon PLA 501F/FA was one of these old line masters, not the first, by any means, but one of the best and certainly the most long-lasting.

Proximity aligners were a bridge tool between the original contact aligners and projection aligners. Yield from contact aligners was extremely low, mainly because the mask was just a stencil laying over the photoresist. It would smear and scratch the resist when in contact and then pull off some of the resist upon being removed. Proximity aligners would position the mask about 5 microns above the resist—i.e. in proximity. This was quite a feat in its day, requiring alignment through six degrees of freedom while holding mask flatness even tighter.

All worship the INTEL chips it seems. What was 5 years earlier, when the the 6800 and the 6502 came out. $300 for the 6800 and $30 for 6502, all because the better chip yelds on the 6502.
4K and 16K Drams were the main income, for intel, mostek,Ti, and others. It is intersting to see
information like this as most of this is a trade secret. Was this one of the reasons 16K dram dropped
from $20 to $2 a chip? (ball park prices as you could not find 16k drams until about 1980 for sale for to the hobbiest). Better masks, also ment less down time, so production volume could increase.
Ben.

Lots of info in the linked PDF as to how aligners changed the economics of chip production. See also discussion in the previous thread
“History of the Microprocessor and the Personal Computer” (a couple of articles) which mentions the link to the 6502’s low price.

Nearby on the The Chip History Center chip is discussion on the introduction of the stepper, which was the next leap forward and which was needed for the successful economic production of the 64k DRAM generation. Short interview here with Bill Tobey:

Bill Tobey on Bringing the Wafer Stepper to Market

Bill Tobey interview on his conceptualizing the wafer stepper in the late 1970s | The Chip History Center | The Virtual Musseum of Semiconductors.

Here’s the in depth piece

The Electronic news article is just such an item. companies around the world were struggling to make 64k bit DRAMs with a new technology called a stepper.