The MicroWriter - chorded keyboard, 1802 inside

Maybe you wonder: What’s a MicroWriter? … and what is it made of?

Image from wikipedia by Steve Baker: 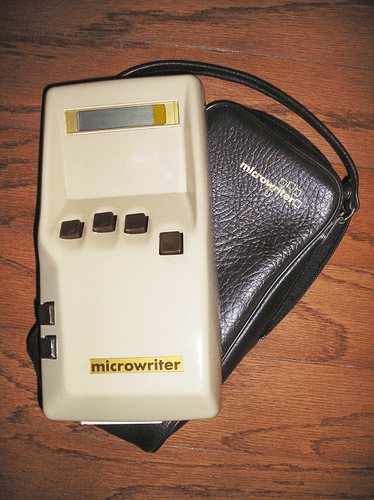 More info here - it has a one-line display, into the current document, and a tape interface for storage. So, not so much a keyboard, more a document entry device.

Invented by Cy Endfield, an un-American.

Here’s an in-browser emulator, for those of you with a numeric keypad:
http://www.loper-os.org/mwemu/mwemu.html

There was a variant of these for the BBC Micro - plugged into the user port. I remember using a left-handed one at one point (I am left-handed!) It took a while to get used to it, but I was able to use it for program entry, although it was more suited for text entry. However it needed regular practice so as soon as I stopped using it then I forgot a lot of the ‘chords’.

The closest thing I’ve seen in recent years is the keyboard on the Fignition Forth system.

I had a friend - something of an inventor and a BBC Micro fan - who used to take long walks on moorland and always found himself besieged with ideas that he wanted to note down. Obviously, a pencil and a notepad would not do, so he started work on a rig that would involve a MicroWriter stuffed into his coat pocket (he’d already taught himself to use it), ‘some sort’ of computer (I think he was imagining a portable version of a Beeb) and a head-up display attached to the peak of his hat. That way, he could think, make notes and watch where he was walking all at once. This was in the early/mid-80s so, suffice to say, he was well ahead of the necessary technology and it went nowhere.

He was always ahead of the curve. He also invented a magnetically triggered automatic cat flap long before such things came onto the market. Alas, it needed quite a strong magnet and his wife made him abandon it when the cat was found stuck to its food bowl.

There’s a more recent device called a CyKey produced by Bellaire Electronics in Barnstaple, Devon. I got one about 10 years ago as an alternative input device and then used the MicroWriting chords on a device I made for the partially sighted.

There was also an early PDA called the MicroWriter Agenda - that appeared in the early 1990s. (1989)

Other side of Dartmoor from me. 35 miles as the Devon Eagle flies. Never heard of them. Amazing what’s on your doorstep that you just don’t know!

Hi all,
I confess to being a bit, well … a lot of a lurker here. I’ll try to change that if time permits.
(I go back to the days of the SC/MP evaluation kit.)
This post reminded of something that I was always going to build … but didn’t.
The Writehander.- 1978 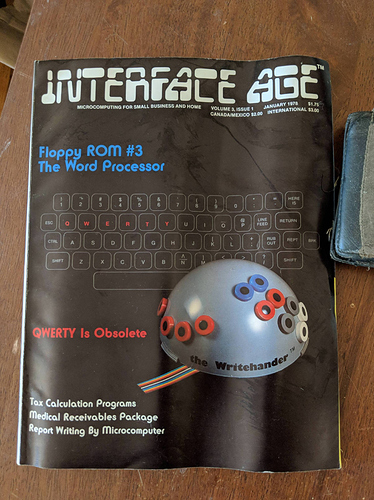 What a marvellous looking device! Here’s the issue online: 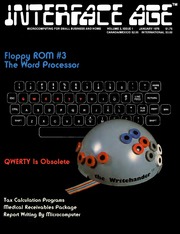 Edit: and please do de-lurk!