How many 8 bit microcomputers of each flavour were sold? Which dominated? There’s a 2005 Ars Technica article with some nice images (most likely US figures not worldwide…): 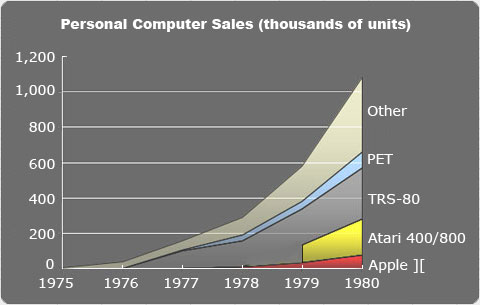 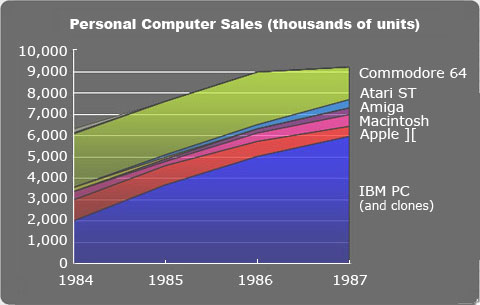 It looks like the C64 peaked at 40% of market share and that was exceptional (although we see elsewhere the TRS-80 reaching 70% very early on): 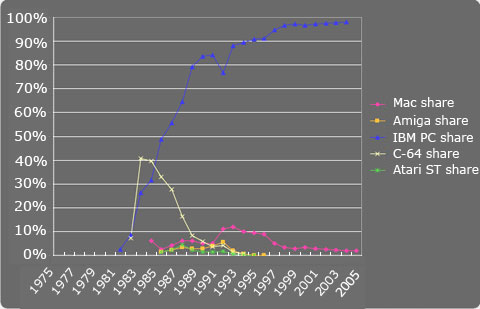 Michael Stiel put some work in to resolve competing claims for numbers, and came to 12.5 million C64s over all time. That compares to 5 million in the Apple II series, 2 million for Atari, and 1.5 million for the BBC Micro.

On the other side of the great divide, we see 5 million Spectrums, 3 million CPCs, and 8 million PCWs.

I bet I’ve missed some obvious ones - but any huge sellers missing?

The PC should not be considered a 8 bit computer, just because it had 8 bit bus. It would be best to split this in to game or busness use. A $399 Color computer (Dragon) vs A $3,999 IBM PC is a big price range. Does Apple II clone count as a Apple for sales? Sales by region would be also handy. Did the UK have C64’s than the US in % of the population?
Who had cassete tape, or floppies?

I agree: I’ve left the PC out of the picture entirely. (Of course the article I linked includes it, but that’s a different question.)

The UK certainly had C64s, as did Germany, and I think in both cases the machines were made locally. What the percentage was, I don’t know. I’m pretty sure Amstrad and Sinclair were more popular in the UK than in the US, and Apple was less popular in the UK. CPCs were, I think, also popular in Spain, and Orics in France. That is to say, there were a few markets on this side of the Atlantic.

Floppies were not nearly so popular in the UK as in the US, in the early days - the price difference was the main factor, I’m sure.

In the US the best sellers of 1982 were the VIC 20 and the TI99/4A. If these are lumped in “other” in that chart then I would expect a larger slice for that.

(A quick check says the TI99/4 lifetime sales were 2.8 million - not bad at all. And the VIC-20 2.5 million. With the caveat that all such totals are subject to revision or doubt.)

The PC should not be considered a 8 bit computer, just because it had 8 bit bus.

I agree: I’ve left the PC out of the picture entirely.

Isn’t the TI a 16 bit machine then under this lens?

Ha ha - how true! I withdraw the TI99 from consideration!

The fact that the TI99/4A had a 16 bit processor was known to only a small fraction of its owners, so I would call it an obscure technical detail - a curiosity rather than a feature. It was selling at $100 at the end of its life and certainly was in the low end of the 8 bit market.

Unfortunately we get into a minefield if we act as if computers fit into categories of 8, 16 or 32 bits. Certainly one can say some useful things, but there’s also room for unproductive lawyering.

One of the interesting thing about Amstrad’s PCW offerings are that they were at the same time a workaday appliance for word processing, an 8 bit CP/M machine, and a credible bottom-end alternative to the PC. They were home computers in the sense of computers for the home, and indeed computers that you could program, but not in the sense of having a large offering of games and being popular with teenagers.

It is very subjective, but it is interesting to think about the different aspects of this discussion. The original article talked about “personal computers” and didn’t mention anything about 8 bits, so we have gone in a different direction.

A good example of different perspectives is the reason why these charts tend to be shocking. They show units shipped while nearly all histories and the articles from that time tended to focus on revenues instead. Since the Apple was so much more expensive than the others, it is remembered (and was perceived back then in business magazines) as being by far the number one. But as these charts show, if you focus instead on how many people had the machines it is a very different story.

I think I agree with this, but probably because the PC and its architecture continued to live on, while none of these other machines did. You won’t find a TMS9900 family PC on anyone’s desk today, nor a 6502 or even 65816, but the computer I’m typing this on right now boots up as essentially a 3 GHz IBM PC.

It may not be a fair rejection, but it seems like an appropriate rejection.

But does it have the 640KB that Mr. Gates claimed all you will ever need? OS/9 I or OS/9 II for the 6809 was a great system but mass marketing by apple and windows pushing GUI on to the public requred more memory than a 8 bit cpu could handle, forcing one to buy your Favorite evil empire brand 16 bit cpu. The PDP/11 was over priced, so that CPU was lost in history a personal computer. I have nice 18/9 bit TTL(FPGA) design but that is 45 years too late.

That may well be it, @elb. Another factor in my own journey is that the PC didn’t appear, or didn’t appear attractive, until very much later, specifically when I got a tip-off that there was something called Linux, which was free and unix-like. There are, of course, people whose journey started with the PC, and they see more differences between the early models and the later ones, and might well have bonded with the first one they got to know.

Good point about revenue, @jecel, and there’s also the measure of market share: the TRS-80 could dominate the early market, which was relatively small compared to the later market, without selling such large numbers of units.

And as ever, there’s the question of where you live and therefore which machines are popular and available. I admit to being a bit UK-centric, but I hope I take into account a more global picture. Any given article might be written for a specific audience.

Mind, my tongue was pretty firmly in cheek when I mentioned the TI. The TI should be on the list simply because it is from the era of home computer diversity that the PC destroyed. Today, we have PCs. (Oh, and a few Macintoshes, and a dozen or so Chromebooks. Oh, and your bicameral phone.)

The TI was part and parcel to the “we have no idea what we’re doing, let’s sell a home computer” era of computing.

Oh, and don’t forget RISC OS - it’s still going strong! Well, it’s still going, anyway, on Acorn’s historic machines and also on Pi-based machines. I’ll admit, it’s a bit of a niche. As is BeOS, as resurrected in Haiku. And it looks like you can run AmigaDOS if you wish, in the form of AROS.

This made me giggle. Thanks!