From the today’s computer history blog of HNF (Heinz Nixdorf Forum):
Seventy years ago, on June 7, 1952, the G1 went into service in Göttingen; it was the first freely programmable electronic calculator in Germany. Its construction was made possible by funds from the Marshall Plan. It contained 476 tubes, 101 relays and drum memory.
Further reading (in German): G1 – der erste deutsche Röhrenrechner | HNF Blog

I’m somewhat fascinated by the aesthetics of the arrangement:

On the one hand, there was apparently a felt need to neatly hide the TTY in a (wooden) housing on the operators desk, but, at the same time, the operator is literary facing the bare electronics of the machine. And in the middle of this, a blank space, like a demarcation zone, separating the furnitured human space from “machine space”. 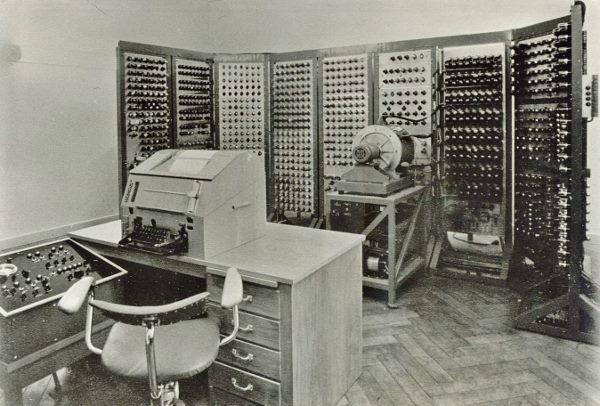 (P.S., I know that there was a practical need to have a watchful eye on the tubes/valves, but it’s still striking.)

Just goes to show the historic value of the Marshall Plan.

Maybe the printer is housed because it’s noisy? There are no fans to be seen, though there will be some noise from the drum (and motor-generator??) but that’s a different kind of noise, and further away.

I think “free” programming must mean “as distinct from plugboard or hard wired” - I still wonder then if this can only be straight line code, as the code is executed from paper tape, not from memory. In which case we should (in modern terms) indeed call this a calculator, not a computer, and we’d observe that it’s not Turing-complete. Some early handheld calculators would have a sort of keystroke memory, a kind of macro capability, which can save labour but can’t represent branches or loops.

All that said, one can configure a tape into a loop, and that can even be enough, so long as we have a way to stop. There are such calculators, where the keystroke memory will wrap, and a divide by zero will terminate.

A nice find anyway! The 101 values immediately reminded me of Olivetti’s Programma 101, which is some years in the future.

Regarding TTYs in wooden cabinets, there is a similar arrangement seen in a photo of Joseph Weizenbaum. While this is often tagged as “Joseph Weizenbaum demonstrating ELIZA”, to my knowledge, it was (first?) published in a German magazine (either Stern or Spiegel – the link to the original source doesn’t show up in search results anymore), which makes me think that this may actually show Weizenbaum visiting Germany (and is not so much about ELIZA) and that this is a German operator’s desk. So there may have been a preference for these furniture like arrangements.

See here for the photo:

My previous writing on Dr. Weizenbaum Dr. Joseph Weizenbaum was my professor in the artificial intelligence course I took at MIT in the 80s. I recall whispers from graduate student TAs that he was extraordinarily famous, but like any normal teenager...

P.S./correction: As this is a very good reproduction of that photo, we can see part of a building outside a window in the background. And this does look more American than German to me. So I’m probably wrong about this, and this is indeed about ELIZA.
(The photo used to come with a copyright notice of that German magazine, which put me on the wrong path.)

Yes, that box is clearly to repress the noise - I’ve seen many similar home-made boxes in the home CNC community. Though I’m surprised that WAF would be an issue in a machine room like it is at home!

You know, that large rotor there make me wonder if this was really a crypto machine? Come to think of it, it would have to be a secret crypto machine - a crypto crypto perhaps

With all the hullaballoo about Bletchley, we never hear anything about equivalent development in Germany which I can easily image they would have started work on after the war so as not to get caught on the wrong foot the next time, without actually telling anyone what it’s real intended use was? (NB this is pure speculation on my part. Don’t go quoting me as a source on wikipedia

Hee hee… yes, I’d say almost certainly a drum memory - see the various signal pickups in groups around the thing. There’s another photo on the HNF blog with a different angle: 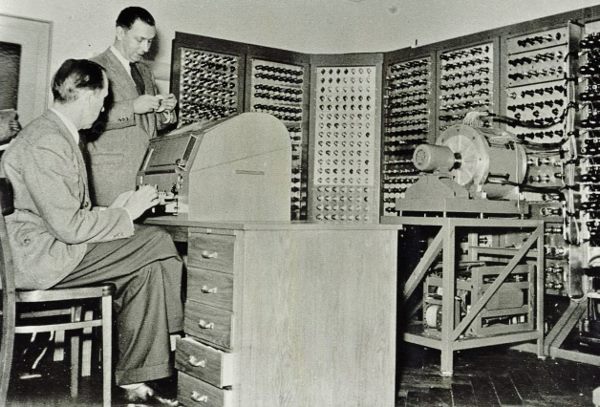