The es65 multi-user 6502 system from Austria

A rare system indeed, and not previously well-understood, but new information has been dug up. See this thread on stardot.

This was a development system for 6502 systems. Up to six Developers could use the es-65 to assemble programs and also (with additional hardware) do in-circuit debugging on the target! After finalizing the code an EPROM could be programmed on the es-65 (with the second serial ports) and the work was finished. I think this is great stuff from 1980. Robert_O is in contact with the original engineers, and sharing notes and reverse-engineered schematics on bitbucket.

Back in the days of G+ we posted about this machine here.

@oscarv has one of these machines:

Documentation on the es65 Microcomputer 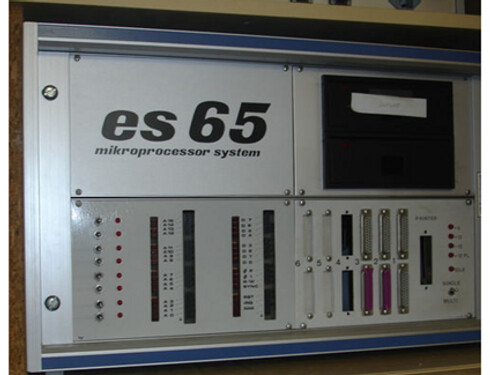 Great that there’s new information on this. I’ve seen this on Oscar’s Obsolescence site, but this had been all I ever knew about this.

(Maybe, I’ll try to find some time for patriotic disassembly efforts over the holidays? This may sound funny to some, but an Austrian system is a rare occasion.