The DynaBook - 40 Years Ahead of the Herd

The Golden Age of Retrocomputers

I think the crucial observation about the interim Dynabook was to throw money at the problem: this was never to be a commercial proposition with a business case behind it. A research machine, not a product. And so the usual constraints of economics don’t apply.

His visions of what the product would be capable of, in reality took about 40 years to materialise and coalesce into a comparable product. It could be argued that modern laptops and tablets are the direct descendants of his vision.

Some of the prerequisites would be:

So realistically such a product could not be constructed in volume until roughly 2000.

However, one early contender was the Atari ST-Pad from about 1991, just at the time Atari was moving away from personal computers.

The two products that best encompass the original Dynabook concepts are the One Laptop Per Child - announced 2005 and the Amazon Kindle, released in late 2007. The true tablet finally arrived in 2010 with the launch of the iPad.

It takes a true visionary of technology to predict the arrival of computing devices that would take 20, 40 or even 50 years to become technically and commercially viable.

Alan likes to point out that the Dynabook was about the services it would provide and not necessarily the tablet form factor. He mentions that though the paper only talked about the tablet with a hardware keyboard or on screen keyboard, he was involved in Ivan Sutherland’s VR work and considered that an equally valid incarnation of the Dynabook ideal.

The late 1980s saw several attempts at pen based tablets, including the Momenta which actually had Smalltalk. Hermann Hauser’s Active Book was notable since he was responsible for the ARM processor on which it was based. 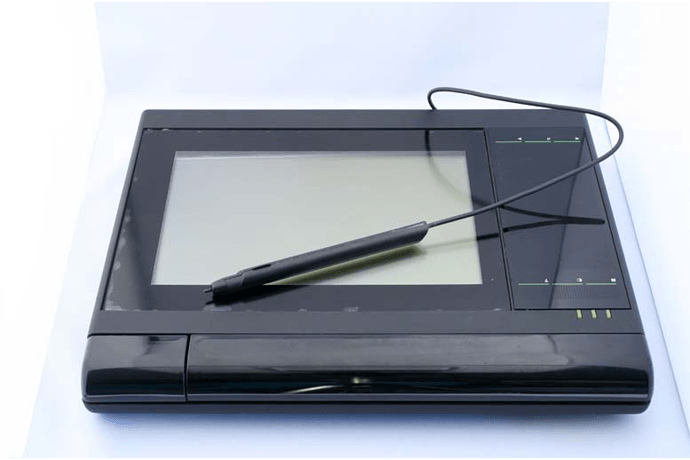 In the late 1990s we had a new series of attempts fueled by the new World Wide Web. I had a chance to play around with a very reasonable prototype from National Semiconductor to show off their recently acquired Geode processor (bought from Via, soon sold to AMD which would supply it to the One Laptop Per Child).

In 2000 the creators of the Alto would release the Microsoft TabletPC.

Pen interfaces would be mostly supplanted by Jeff Han’s multitouch work though Microsoft’s attempt (UltraMobilePC) would not catch on and it would be the iPhone and iPad that would make it popular.

Regarding the prerequisites, a point could be made that the Kyocera portables (Tandy TRS-80 Model 100 “Micro Executive Workstation”, NEC PC-PC-8201/PC-8201A, Olivetti M10, Kyotronic 85) came close in 1983. They were 8-bit, lacked the big display and came with BASIC instead of Smalltalk, and addressed solid state drives by permanent RAM disks, but they were really close:

The TRS-80 Model 102 and NEC PC-8300 improved on this in the next year maintaining the form factor. A point could be made that a similar 68K system could have been made at the time, if there had been any low-energy variants available. 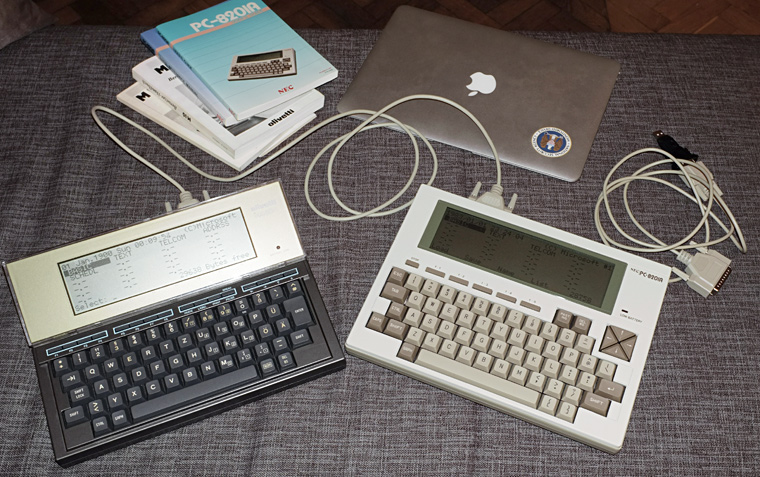 P.S.: In this context, we should also mention the Epson PX-8 “Geneva”, which was similar in many respects and ran CP/M on an 80 columns screen.

It takes a true visionary of technology to predict the arrival of computing devices that would take 20, 40 or even 50 years to become technically and commercially viable.

On the other hand, this proved to be an important input and orientation point for any further developments in the next couple of decades, which could be – at least partly – described as “the hunt for the Dynabook”.

Around 2000, I was working on NASA training materials and so we were very interested in the notion of book-like computers. I tried a variety of the early tablet PCs, including the massive metallic blue Qbe, various hefty Viewsonics, and a couple of early NECs. At the time, the tablet makers felt like they needed to compete with laptops based on specs so the tablets kept getting bigger and heavier and hotter running with more and noisier fans.

However, one mostly forgotten machine, which I felt was the first to really “get” the idea of a tablet was the NEC Versa LitePad from 2003. It was about 2 pounds in weight, and about a half inch thick. I loved that little machine and actually used it as my main computer for quite a number of years. It didn’t do very well in the market because it was a bit expensive, was not extensively marketed or distributed, and was panned for being “underpowered” which entirely misses the point of the machine.

The main thing that this and other Windows Tablet PCs lacked was a capacitive touch screen. It was obvious to me from working with the early Viewsonics that had resistive touch screens, that finger based input was a necessity for mobile use rather than a pen so Microsoft really dropped the ball on that one. 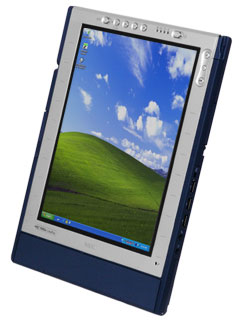 Regarding visions in technology, we shouldn’t forget Wesley Clark. Compare this section in “Computing in the Middle Ages” by Severo M. Ornstein (2002):

This [TX-2’s] way of using a computer evidenced a profoundly different philosophy: It empgasized optimizing the time of the human beings, rather than the time of the machine; it also looked forward to the day, when a few seconds of unused computer time would no longer be so costly. […] Wes Clark, who as its principal architect, was king of TX-2, foresaw this state of affairs and deliberately arranged the use of TX-2 in this then-unorthodox manner. I recall a seminar he gave at about this time in which he looked forward to the day when computer power would become virtual free. I remember the lecture vividly because he said that one should think about a computer as something that would one day perhaps just be painted onto any hard surface. I can still see the gesture he used, painting back and forth on the top of the desk from which he was lecturing.

Incidentally, Xerox PARC reinvented Clark’s wheel regarding multitasking for the Alto (which gave rise to a rather amusing scene, where Clark was like, maybe you should have a look at the TX-2 documentation, regarding patent claims raised by PARC.)

(I was actually looking up “Computing in the Middle Ages” for a passage which mentions the expectations of computers eventually shrinking to the size of a book as perceived as early as in the 1960s, but couldn’t find.)

“Computing in the Middle Ages”

A fine book, which appears to be legitimately available as a PDF here.

240 x 64 px is enough for Space War. The Atari 2600 version only had a resolution of 160x96, which is only modestly taller. Some of that vertical space was consumed by the score, so it really wasn’t much taller.

I’m not sure if there was a TRS-80 Model I/III version of Space War (128x48 resolution), but there were Asteroids clones.

But anyway, let’s talk early 1970s technology … If suitable LCD display technology wasn’t available yet, how about physical plotting, like an Etch-a-Sketch?

(Just nitpicking) The original game had a technical resolution of 1024 x 1024 with a visual resolution of “about 512 x 512” (spot sizes were bigger than the distance between adjacent display locations and varied with intensification). If you want the true game, including the central star and the moving, realistic night sky in the background, it’s the resolution you need. Given that Stewart Brand parallelised Spacewar! and the developments at PARC in his article “Fanatic Life and Symbolic Death Among the Computer Bums” (including the notion of Spacewar being played much at PARC), it’s striking that the display of the Dynabook qualifies for the true Spacewar experience.

Regarding alternate display technologies: I always dreamed of a high-res VDF matrix display (for 80 chars at 16 lines or more, in fluorescent green, of course, but amber may be nice, as well).

An Etch-a-Sketch display might be considered a precursor (or, as a post factual idea, a prequel) to e-ink displays. For larger display sizes, we may also consider a Zen garden with an automated rake.

Regarding the background of working with pre-teens (the Piaget-Bruner context mentioned in Kay’s Dynabook paper) and how this relates to some principal ideas of the GUI, mind the second part of Alan Kay’s talk “Doing with Images Makes Symbols”: https://www.youtube.com/watch?v=1aQPxJZnF6I

The first part is worth watching, as well, concerning more the technical developments leading to Kay’s idea: https://www.youtube.com/watch?v=cOpxL5xPejo

But anyway, let’s talk early 1970s technology … If suitable LCD display technology wasn’t available yet, how about physical plotting, like an Etch-a-Sketch?

One of the inspirations for the Dynabook was an early plasma display prototype with only 16 pixels that Alan saw at the University of Illinois in the late 1960s. He knew that the resolution would go up and that Moore’s Law would eventually let him put the equivalent of a PDP-10 on the back of it.

By 1974 the University of Illinois had their Plato IV terminal with a touchscreen and a plasma display with 512x512 pixels. It was far from portable, but in the 1980s we did have a few plasma laptops and “lunch box” computers.

An interesting feature of some plasma displays is that they can serve as their own frame buffer. So the computer attached to it can get by with less memory than it would otherwise need (32KB for 512x512 pixels).